END_OF_DOCUMENT_TOKEN_TO_BE_REPLACED

Gold and the S&P suddenly display a near-perfect correlation. What to make of it...?

Pigs still don't fly, of course, and chickens still don't kiss (or at least, they don't kiss too well). But gold does appear to track the S&P 500 index...for the moment.

The answer to this question probably resides within the cause of the curious correlation between gold and US stocks. And that cause, broadly speaking, is "liquidity".

Simply defined, liquidity is that vast pool of cash, credit and derivatives that animate financial asset prices. Increasingly, this vast pool is controlled by hedge fund managers, private equity firms, and all the other professional investors who strive to justify their hefty fees.

As these heavy hitters scour the globe to extract excess returns – otherwise known as "alpha" – from the financial markets, they toss their "buy" orders at any asset class that offers a compelling potential return.

All the world's major financial assets, therefore, are floating on the same vast sea of liquidity – including US stocks as well as Chinese stocks, Kansas farmland, Brazilian bonds and yes, even gold. 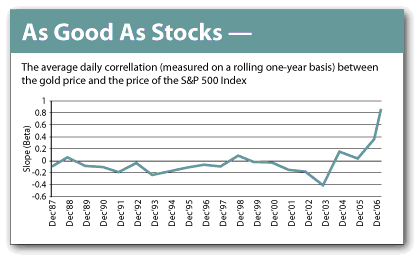 Historically, gold and US stocks have tended to diverge from one another. Whenever the S&P zigged in one direction, gold would zag in the other. This reliable non-correlation has emboldened cautious investors throughout the ages to allocate at least 10% of their portfolios to gold.

Today, cautious investors continue to allocate a portion of their wealth toward gold and gold stocks. But gold may no longer be the all-weather hedge that its admirers expect.

"The observed tendency of gold to go up when stocks go down is no longer observable," remarks James Grant in the May 18 issue of Grant's Interest Rate Observer.

Even more recently, gold has maintained it reliably contrary performance relative to stocks. "From the opening months of the year 2000 until just recently," Grant relates, "gold and equities went their separate ways. While the Nasdaq fell by 45% and the S&P rose by just 11%, the gold price climbed by 133%."

But something has changed. Gold has joined the "investment mainstream," says Grant. Gold and equities now dance arm in arm.

For the better part of two decades, gold exhibited an inverse correlation or non-correlation with the S&P. But over the last few months, the gold/S&P correlation has swung from consistently negative to sharply positive. Gold might as well be a member of the S&P 500.

So now that this historically non-correlated asset has begun to track the S&P very closely, it has begun to fraternize with enemy, so to speak. As such, the next sharp downturn in the stock market might coincide with the next sharp downturn in the gold price...at least for a while. But sooner or later (probably sooner), gold's contrary tendencies will likely reassert themselves.

A few months of uncharacteristic correlation with stocks does not automatically erase gold's legacy of non-correlation and wealth preservation.

"The history of paper money is the history of debasement," Grant reminds us. "So we goldbugs accumulate gold, not so much as a hedge against the unknown but as an investment in the preordained. Paper money loses value. That is its fate."

But fate rides the "local," dear investor, not the express. Fate almost always shows up where it should, but almost never shows up WHEN it should...or when an investor hopes it will.

"It might be that this joining of hands of previously estranged classes of investment assets [has been] an aberration, and that a long-term, committed buyer of gold can safely ignore it," Grant concludes.

"But I fear it's no fluke. If I'm right about this, gold may disappoint its many fans in the next bear stock market – that is, before the derangement of the world monetary system furnishes the fundamental cause for even higher prices in the years to come."

Don't expect that gold will go up when everything else goes down, in short. Not at the very start of the next great bear market in stocks, at least.