END_OF_DOCUMENT_TOKEN_TO_BE_REPLACED

The bullishness in Gold Bullion looks hard to stop. But what might mark the end...?

CAN YOU visualize a possible scenario for putting a sudden end to the secular rise now underway in gold and silver? asks David Galland, managing editor of The Casey Report.

In a recent conference call with the research team of The Casey Report, we once again collectively tried to imagine what situation...what scheme...what government manipulation...might finally put a stake through the heart of gold.

Setting the stage, I think it's safe to assume that in order for the gold bull to decisively reverse direction, the following general conditions would have to be precedent in the economy:

The financial crisis will have to have ended. Which is to say that...

But the following chart from The Casey Report a few months ago tells the story of runaway printing, and of why the Gold Price is so strong by comparison. 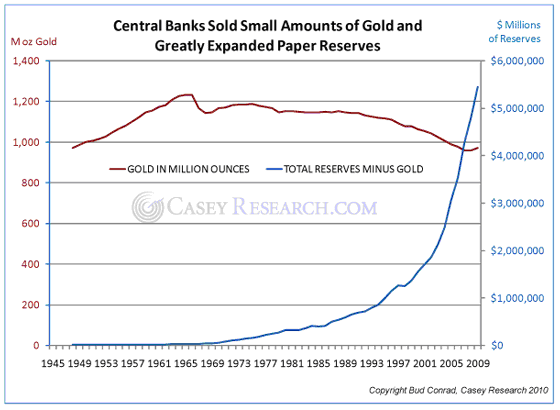 Inherent in the list just above are other conditions that will have to be precedent for gold's run to end.

For example, politicians around the world will have to find the uncharacteristic courage to act in ways that are deeply unpopular with the very voters that brought them to office. Namely by slashing the scale and cost of government, with all the many cutbacks in subsidies and services that such a Great Downsizing must entail. And this rare new breed of politician would have to retain their jobs long enough to see through the reduction in government that must occur if stability is to be regained.

Of course, for the politicians to retain their jobs despite voting in deeply unpopular cuts to government spending will require that the voting public adopts a long forgotten stoicism and becomes willing to take their licks without running to the government for relief. Very much not the case with the students in London who last week started tearing things up over a proposed reduction in tuition subsidies.

In addition, the world's governments will have to step back from the brink of the full-scale currency wars now darkening the horizon and move to restore confidence by tossing their fiat monetary systems over the side in favor of something more limiting. Absent a return to some semblance of monetary sanity, the purchasing medium that gold has compared so favorably to in recent years will continue to weaken, and gold will continue to rise.

Then there is the matter of energy. Civilization's ascent into relative prosperity is tightly related to the widespread availability of cheap energy. In the current context – as opposed to the perfect-world vision of a green energy future – we need the dirty stuff, and lots of it, if we are going to avoid serious economic pressure that in turn keeps the Treasury and the Fed throwing money into the furnace.

Like them or not, there's no denying that coal, oil, and nuclear are the proven sources of base load power. Sure, implement the latest technologies to mitigate negative side effects, but don't let that stop us from fully embracing their development and production. Which means the government needs to stick the many new "green" regulations back on the shelf for a day in the future when we can actually afford them. With oil stubbornly pushing back toward $100 per bbl, now is not that time.

Even that incomplete list of the hurdles to be climbed before the crisis can end, and before gold's run ends as well, begins to communicate the challenge in finding a scenario where the world's governments don't opt for currency debasement. Or, put another way, where governments turn their backs on the default practice of using counterfeit money to buy their way through the next day, the next month, and the next election.

That's the "easy" way out...versus the really, really hard work required to essentially turn back the clock on decades of expanding government and the currency debasement that expansion has required.

And so, as hard as we try – and we try very hard – we inevitably come back to the conclusion that the government is now tightly caught between a rock and a hard place. And that, as a result, the loss of confidence in government and its fiat money, which is now evident in gold's rise, is very likely to continue and grow even more extreme.

This scenario is not a pretty one, and even those of us who have taken measures to protect our assets won't like what the world looks like once gold hits $3,000 an ounce...or who knows how much.

Germany's hyperinflation, even after burning out, helped set the stage for Hitler's rise. In other words, anything is possible.

So, what could make Gold Prices go down? In the late 1970s, then Fed Chairman Paul Volcker, wielding an ax made up of high interest rates, lopped the head off the gold bull. Leading up to Volcker's draconian solution, I can well remember the broadly held impression that gold could only go higher. His extreme actions changed that impression almost overnight.

That scares me, because there is a similar – albeit not nearly so widespread – meme going around today. Let me share with you a couple of "out of the box" ideas for how the US government might torpedo gold's further advance today, in the same way that Volcker did back then. (As for the rest of the world's governments – sorry, but it's everyone for themselves at this point.)

#1. Overt Debt Default
In this scenario, Uncle Sam rolls out of bed one morning and announces that Treasury debt will henceforth be redeemed at only pennies on the Dollar. To lessen the domestic political blowback, perhaps he announces a process whereby domestic holders are redeemed at a higher rate than foreigners...or maybe he most disadvantages debt held by those foreigners labeled as currency manipulators.

There is much historic precedent for this extreme action – and, other than some negative consequences over a relatively short initial period of time, countries that have defaulted have suffered no lasting effect. Case in point, both Russia and Argentina now have debt-to-GDP ratios well under 10% – among the lowest in the world. In concert with resolving the debt, the government could promise a new regime of austerity, as well as issue a new Dollar with at least some limited backing. Change-o, presto, problems solved, and gold heads into the tank.

#2. Ban Gold
Tired of dealing with the "gold vigilantes," Uncle Sam simply outlaws gold ownership. Hey, it's happened before. But what about the price of gold in this scenario? Our own Terry Coxon comments...

"Prohibition would force US holders to sell, which by itself would tend to depress the price. However, I'd bet on the price going up because the prohibition would be a signal to the rest of the world that the Dollar's sponsor had gone completely off the rails."

Still, who knows, maybe an international consortium of nations could agree to ban gold – kind of like how they all now ban heroin? Unlikely, but desperate times call for desperate measures.

#3. Return to Gold
Imagine the US adopts a gold standard. In this scenario, Uncle Sam, his back against the wall, agrees to henceforth link the Dollar to gold at some fixed price. With concerns over unlimited government spending capped, gold might hold at the fixed price while awaiting further signals. Of course, what that fixed price might be is anyone's guess – although it would almost certainly be a lot higher than it is today.

Our own Marin Katusa has identified one possible sleight of hand that could be deployed should the US decide to return to a gold standard – and that would be to nationalize all the nation's gold deposits, then use the inferred resources in the ground as backing for the currency. An interesting thought, as it would greatly reduce the price of gold necessary to reach full backing of the Dollar.

While each of those three scenarios carries further implications, they may just pass the test of being politically feasible – which, in this government-dominated world of ours, is all-important.

Unfortunately, only the first – overt default – would actually make a dent in solving the gargantuan overhang of debt that now torments the global economy. As such, only overt default mitigates the need for the government to continue its insane deficit spending or the debt monetization required to support that spending.

In the end, it's hard to imagine that there's a way the government could get out of this situation without the country – and the world – going through a crash for the history books.

Buying Gold today...? Make it simple, secure and cost-effective at what CNBC calls "world No.1" – the award-winning BullionVault...