END_OF_DOCUMENT_TOKEN_TO_BE_REPLACED

Just like beauty, the value of gold and the Dollar are in the eye of the beholder...


EVERYONE HAS THEIR OWN THEORY as to why the US Dollar is sagging, writes John Lee of GoldMau.com – huge deficits, slowing economy, high inflation, artificially low interest rates, subprime issues etc.

I am not sure if those factors are the cause or the effect, however. Like beauty, the value of any fiat currency is entirely subjective and often arbitrary and irrational..

The $600 Billion Dollar Trade Deficit
It is a drop in the sea in magnitude when compared to the world's investable dollars, pegged at over $100 trillion. It is a fallacy to analyze the Dollar based on trade deficits alone, much like analyzing the Gold Price based on physical mining supply vs. jewelry demand.

Rising Inflation
Inflation as properly defined means an increase in money supply, which has been consistently growing by 10-15% per year for the last two decades. While gold is reaching new record highs by the day, the money supply growth has actually slowed compared to past years as fewer people take out mortgages and loans.

Talk about a floating concept. The Euro is no less abstract than the Dollar, yet it now trades at a 50% premium to the Dollar when it once traded at a 12% discount!

The Dollar has remained a fiat currency – backed by nothing but confidence and faith – for more than thirty years, ever since Richard Nixon closed the gold window at the Federal Reserve and stopped redeeming the United States' paper debts with gold.

The current collapse, in my view, has more to do with psychology and confidence. Let me expand.

If a colleague of yours asked you for a $100 handout, you would probably say no. If he asked you for a $100 loan, on the other hand – a loan which you gave but a year later he still couldn't pay back – the result would be a $100 loss. That's no different from the handout you had first refused. You were tricked.

Banks create dollars out of thin air and loan them to people. Even though money is created out of thin air, once the borrower pays back the loan, the transaction is complete and those borrowed dollars perish in the bank's books. In this scenario, the dollar's purchasing power is preserved through non-dilution.

However, as we have witnessed through the recent sub-prime fiasco, many parties are getting away without fulfilling their obligation to repay a loan. Institutions were bailed out as the Fed bought their mortgage positions at face value with new money. Consumers were bailed out as lenders were elbowed by the US Treasury to freeze foreclosures, freeze rate resets, forgive loans, and make lower payments.

Such compromises erode confidence in the system. If one person can get dollars through borrowing without paying them back, and yet another had to work to obtain and save dollars, it is surely not an incentive to earn and keep dollars. Rather, it is a no brainer to borrow dollars and spend unabashedly.

Savers are the most risk averse bunch of people, and when the monetary rules are muddied, they will opt out. This is how a run on the Dollar starts.

Deflation & the Fed are Mutually Exclusive

The deflation camp has been on the wrong side throughout EVERY fiat money experiment thus far. The bear camp contends that the debt burden will eventually become so large that eventually the debt bubble will blow and the prices of everything stocks to real estate to copper and zinc will collapse.

Fiat money systems have always resorted to hyperinflation and destruction of the currency without fail. If hyperinflation could be avoided in a fiat system by the creation of the Fed, the Argentines in 2002 surely would have figured it out and avoided their hyperinflationary disaster.

The idea that the Fed and the government will allow a laissez faire debt cleansing is patently absurd in my opinion. Central bank action has spoken louder than words in the past six months as a record $1 trillion has being printed to rescue banks. For instance, one of the UK's top five mortgage lenders, Northern Rock, has been nationalized. And as for the consumers, loan amounts are reduced without penalty or conditions, mortgage rate resets are postponed, federal guarantee limits are set to increase.

Here we go back to psychology. It is not so much about the amount of bail out money being printed, but rather that the smart money took issue with the way the handouts were given unconditionally across the spectrum. Confidence in the Dollar, as the apex of the world's fiat money system, was further eroded.

Hence the Fed is not the problem or the solution at this point. The Fed's official stance is to ensure price stability. But many people begin to question what the Fed is doing by lowering rates amid record oil prices.

The United States today is the world's largest debtor nation. Regardless of how high oil is, there is no room to raise rates with tens of trillions of dollars in debts to be serviced. Don't blame Bernanke for our problems; even if Paul Volcker were to be the chairman today, he would have acted in exact same way as Bernanke did.

The ideal dream for debtors is inflation, which is precisely what the Fed is advocating – expanding money supply through lowering interest rates and direct handouts. The Fed's action is entirely logical acting on behalf of the average American, which is heavily in debt.

At this point, all the cards have been dealt and exposed. Gold is money and a refuge of capital when a defective fiat money system shows its ugly head. Gold is universally recognized, portable, divisible, liquid, and limited in supply which makes it the only real viable option as store of wealth.

Today's Gold Price has not fully priced in the Dollar's deep and terminal issues and there is nothing that can be done to stop the further rise in gold. 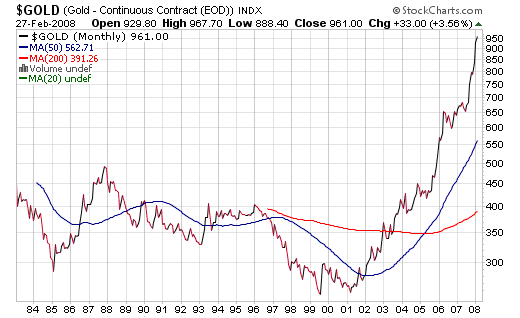 The Fed can talk tame on the consumer price index to try stabilizing commodity prices, but the effect will be limited. Mind you, gold's rising popularity should be seen as positive; the fall of the dollar system levels the playing fields for global consumers and producers.

The Gold Market can easily handle $3,000 to $5,000 per ounce in the near term horizon with minimal disturbance. It is when gold rises too much over $5,000 too fast that we might start to worry about global inflation panic.

My take is that over the next few years gold will establish a new equilibrium to fiat currencies, albeit at much higher level than today's $980 per oz.