END_OF_DOCUMENT_TOKEN_TO_BE_REPLACED

The age of de-leveraging is upon us. Bad news for the US economy; good news for gold...

FOR THE PAST 60 years, corporate debt has grown faster than the economy, writes Chris Mayer in the Daily Reckoning.

The volume of corporate debt has swollen by 4.1% annually, compared with only 2.7% for the economy as a whole. In short, more and more debt went toward producing each Dollar of GDP growth.

What if this 60-year trend reverses?

In fact, I think that is the likely scenario. The deleveraging will take some time...and it won't be fun.

What will this new world look like? More people will save more money. And they will focus more on preserving that wealth than on making a big score. We've been here before. Michael Farrell, the chairman of Annaly, says the psychology of people will change as it did for those of 1930s, as he discussed on his company's first-quarter conference call.

Exhausted by the uncertainties of the 1930s and 1940s, the older generation just felt lucky to be alive and they settled into a time of saving, preservation of capital and lowered expectations as consumers.

If that kind of financial orthodoxy takes root, then leveraged assets like real estate and bank balance sheets face a long period of stagnant returns as they continue to deliver – that is, as borrowers and lenders ratchet down the debt on these things. (I find it ridiculous that government officials want us to believe that the US banking system is OK at 25-to-1 leverage. The banking system's insolvency will become more apparent as it continues to take losses from bad debts made during the bubble.)

So as an investor, it will pay better to stick with the unlevered assets, which face no such head winds. After all, there is no pressure to sell an asset with no debt, no ticking clock. "What are the most underleveraged assets?" you ask. QB Partners gives the answer: hard assets and natural resources.

In fact, something important is happening in the gold markets right now. All through the 1990s to the present day, the world's central banks were net sellers of gold. Europe's central banks, for instance, have sold 3,800 tonnes of gold in the last 10 years. According to the Financial Times, this move cost them $40 billion, and that was with gold at $900 an ounce.

Well, too bad for them. But suddenly, that recent habit of selling gold is changing. Last year, central banks sold only 46 tonnes, which was the lowest amount in 10 years.

As the FT reports: "Sales in Europe have slowed to a crawl and fresh demand is emerging elsewhere and the financial crisis has helped to highlight gold's value in turbulent times." In fact, we may soon see central banks flip to net buyers of gold.

China has doubled its holdings of gold this year and is now the world's fifth largest holder of the metal. China is likely to be a buyer of gold for years because its gold holdings are still very small relative to the size of its total reserves. Gold represents only 1.6% of China's reserves, versus a global average of nearly 11%. To further diversify its reserves – just to get to average – would require significant amounts of gold.

In a post-2008, deleveraging world, it is the unleveraged assets that will outperform against those saddled with debt. It's another plank in the case for gold, which just seems to get stronger with each passing month. "A new chapter has begun in the gold market," the FT opines. Indeed, it has.

The International Monetary Fund, never known as a wise handler of money, is selling a bunch of gold. India bought half of it. A number of emerging market central banks are also upping their gold exposure. Maybe these CBs are onto something.

Russia's gold holdings now make up 4% of its foreign reserves, compared with only 2.2% at the beginning of the year. Smaller central banks are also being crafty. Ecuador's gold holdings have more than doubled since the start of the year – to 54.7 tons, from only 26.3 tons. Gold now represents 32% of that country's reserves. Even Venezuela is Buying Gold. Gold now makes up 36% of its reserves, compared with only 23% in 2009.

So who is the sucker here?

Perhaps central bankers see more clearly than most what the effect of all their money creation will be. In recent months, we've seen a truly unprecedented boom in bank reserves. Bank reserves drive money creation. More money means money buys less – and the Gold Price should rise.

Then there is this chart of the Shadow Gold Price. In the old days of the Bretton Woods Agreement, countries had to maintain certain ratios of gold against their currencies. The Shadow Gold Price aims to replicate this discipline. So for the US, the Shadow Gold Price is Federal Reserve Bank liabilities (bank reserves) plus money in circulation divided by US gold holdings. Also on the chart, you can see the spot price of gold. 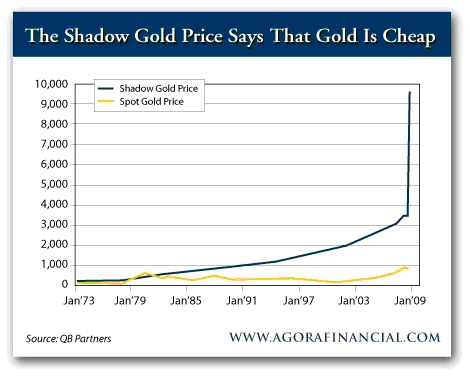 The important thing here is that you see how massive amounts of money creation have barely made an impact at all in the Gold Price – so far. Gold is fundamentally cheap compared with all the money added to the system in recent months.

As Paul Brodsky and Lee Quaintance of the hedge fund QB Partners write:

"If one allows for even a small probability of a future monetary system that reflects more honest/tangible money, then a quick glance at the graph above makes it easy to conclude that spot gold is fundamentally cheap. Even if this is too far a stretch for market participants skeptical of such a radical change in monetary policy, it is reasonable to conclude that the prices of spot gold and the Shadow Gold Price should converge somewhat over time."

They note that the spot Gold Price has never been so cheap compared with the Shadow Gold Price. For parity to set in, gold would have to trade for $16,000 per ounce! No one is predicting $16,000 per ounce gold. In any case, it shows you the risk of holding paper – and bonds – on the eve of a massive devaluation of the Dollar. Maybe the central bankers of Russia, Venezuela and Ecuador understand all of this better than they let on and that's why they are buyers of gold.

It seems pretty obvious to me that if you create a lot of money, you are going to destroy the value of that money. And in that case, you want to own something other than that money.

"If there's an easier way to Buy Gold, I've yet to find it," says one BullionVault user...