END_OF_DOCUMENT_TOKEN_TO_BE_REPLACED

Could Gold Bullion do now what the Rentenmark did for Germany in 1923...?

WHAT WAS a "Rentenmark"? asks Julian Phillips at the GoldForecaster.com.

Here you see a one billion Mark note, among the last printed notes of the Weimar Republic which saw the dreadful hyperinflation from WWI's end to August 1923.

Further below, you see the currency that replaced it and which helped terminate the hyperinflation that infested Europe, but was at its worst in Germany.

This was at a time when gold was completely accepted as money internationally. Due to the economic crises in Germany after the Great War, however, there was no Gold Bullion available to back the currency. Therefore the Rentenbank in November 1923 issued the Rentenmark, a currency backed by mortgaged land and industrial goods worth 3.2 billion Rentenmark. 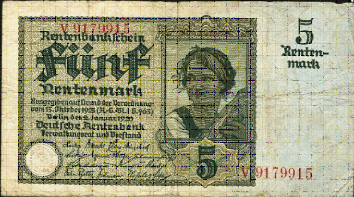 The Rentenmark was only a temporary currency and was not legal tender. It was, however, accepted by the population and effectively stopped the inflation. The Reichsmark became the new legal tender on 30 August 1924, equal in value to the Rentenmark.

Together with the responsible fiscal policy of Chancellor of Germany Gustav Stresemann and Finance Minister Hans Luther, it brought the inflation in Germany to an end. The Rentenbank continued to exist after 1924 and the notes and coins continued to circulate. The last Rentenmark notes were valid until 1948.

Why did it work? The first question to ask is, how could the German people, so devastated by the previous abuse of un-backed paper money, have accepted this new piece of paper? For a start no-one ever has a choice when it comes to everyday cash needs. Even when Zimbabwean notes were worthless, when they were printed with an expiry date, the people in that country were forced to use it, by government order. The Germans had developed all sorts of ways to bypass the use of this paper. And then the system had flopped.

Well before then, foreigners had refused to accept German paper and the government had sold the German Gold Bullion off overseas. So what made the German people accept this new paper currency? It was secured against something the people believed was unprintable and valuable, industrial goods and land. This appeared to strictly limit the volume of money that could be printed against it. It inspired confidence again.

But a closer look showed why it was credible:

While it worked and inspired confidence, however, it only did so inside Germany! A foreigner would not have been welcome with such notes, to go to court against the government so he could seize the assets. To go up against a government on its turf is never wise. The national nature of the money limited it to within Germany's borders. Anybody seizing assets of Germany outside the country would have a chance, because the matter would have to be decided outside Germany's Jurisdiction, where the country would simply be a debtor of the foreigner. At that time, Germany did not have overseas assets anymore.

Currency, or government issued paper can only succeed when it is trusted and reliable. The moment it loses that trust and reliability as the Weimar Republic money had, it is worthless! Today such a scheme would not work because of the devastation or property values in so many parts of the world and the dangers that such values would fluctuate too much.

Mr Robert Zoellick has now set the cat amongst the pigeons this week by suggesting that Gold Bullion should be used as a reference point for currencies at the current time, a time when confidence in currencies is declining fast. Why did he choose gold, you may well ask? Yes, it has always been seen as money except for the last 40 years when the world has trusted the behavior of governments and their currencies. There is little chance that a Gold Standard could work in its past form that would be too restrictive of money supply.

Beside the small quantity of gold available would make each piece of gold too valuable to make it a practical money. But that does not mean to say that gold could not do the job used in another way. The head of the World Bank suggested it be used as a reference for currency values, not as money itself. This is entirely different. What virtues could gold bring to the monetary table?

As such in the international arena, gold's value will reflect the value of currencies, whether governments like it or not. As such a currency can be devalued or revalued against gold when comparison to another currency is inadequate (such as the Dollar being valued against the Euro – with both suffering one form of monetary decay or another).

Just as the Rentenmark anchored Germany's economy in its post-hyperinflation phase, gold could bring such an anchor to global money. It will be unpopular until it is sorely needed because of one or more major nation's profligate behavior regarding their own currencies. This has already started as we can see in the G-20 nation meeting of this week. The cautionary note is that it worked because the nation was desperate having exhausted all other alternatives. This desperation may be needed before gold takes on that role internationally. Then gold will value each currency at its internationally exchangeable value. In such a role, you can be sure that each national government will want to control the gold in its own Jurisdiction at some point in time!

Buying Gold for your own private reserves today...?