END_OF_DOCUMENT_TOKEN_TO_BE_REPLACED

By raising the Gold Price, US authorities also expanded the money supply...

FROM May 1 1933 until the end of 1974, US citizens could no longer hold gold as a protection against paper money, which also lost its gold backing at the same time, writes Julian Phillips of GoldForecaster.com.

There were two distinct phases to the process that began in 1933.

Firstly, the US monetary and banking system contributed to a large extent to the depression. As Mr. Ben Bernanke has aptly demonstrated by his Quantitative Easing, a reduction in the money supply shrinks economic activity significantly and breeds deflation.

After four years of such shrinkage, it was realized in 1933 that a huge increase in the money supply was needed to invigorate the US economy and make assets preferable to cash. The monetary system at that time was based on the gold standard, a system that set the Gold Price at a fixed level against the Dollar and other currencies across the developed world.

One gets the wrong perspective if you look at the Gold Price as having been subsequently raised as opposed to the reality that it was the US Dollar that was devalued. In an instant, the money supply of the US was increased by 75% in 1935 when the Gold Price was raised from $20 per ounce to $35 per ounce.

This was a devaluation of the Dollar. It brought a tsunami of liquidity to the banking system that saw deposits leave the banks and flow into industry again. We stress that this was not a gold event, but a money event –gold being money at the time. As you can see on these Dollar notes where gold was an integral part of the money system then. 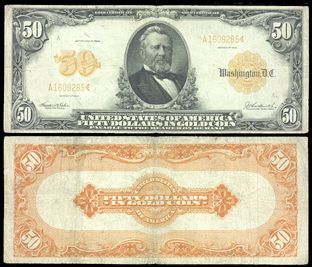 The second phase of the confiscation of gold was to place gold under the control of government out of the hands of private holders, as storm clouds gathered over Europe. Government was then in a position to control the recovery and direct funds to where government felt they would be best put to use.

Despite the proliferation of Dollars in the system, confidence in it remained high as it remained linked to gold. The belief that, somehow, this restrained the issue of money also remained inexplicably strong. So long as confidence remained in currencies the value of the Dollar remained solid.

Had gold been left in the hands of individuals and private institutions, such an issue of money may well have led to it being sold for foreign-held gold. This would have defeated the government's purpose in devaluing the Dollar. The US government had to confiscate the gold of its citizens to ensure the focused success of the increase in the money supply.

The success of Dollar devaluation and the "governmentization" of gold was successful as it fueled a recovery that was also invigorated by export demand for US goods ahead of the Second World War.

An ingredient that is often overlooked today is that the world back then was a world of fixed exchange rates only. That's why it took one government decree to change the quantity of money.

That hasn't changed! Today, Quantitative Easing does the same.

Federal Reserve chairman Ben Bernanke is a scholar on those times. He used his knowledge of those days to forge the policy he follows today to avoid either deflation or depression. So far it has worked to the extent that the US economy has entered neither. It's clear though that he needs the vigorous support of a very focused US government and the US citizens to turn positive, before he can see his policies produce a convincing recovery. He has neither...