END_OF_DOCUMENT_TOKEN_TO_BE_REPLACED

Gold and the major commodities say we risk entering a world of hyperinflation...

"YOU UNLOCK THIS DOOR with the key of imagination...

"Beyond it is another dimension, a dimension of sound, a dimension of sight, a dimension of mind. You're moving into a land of both shadow and substance, of things and ideas. It's a journey into a wondrous land, whose boundaries are that of imagination. That's a signpost up ahead, your next stop, the Twilight Zone!".

Rod Serling was a multi-talented man and a prolific writer. His television series "The Twilight Zone" ran for five seasons in the early 1960s and was extraordinary, winning three Emmy Awards. As the host and narrator, and writer of more than half of 151 episodes, he became an American household name and his voice always sounded a creepy reminder of a world beyond our control.

Nowadays, there are numerous signposts indicating that inflation in the United States is getting out of control. The US M3 money supply is 14% higher than a year ago, its fastest growth rate in 35-years, the US Dollar Index is plunging to 15-year lows, gold is surging to a 28-year high, crude oil is cruising above $80  per barrel, wheat prices have doubled to an all-time high, and the Baltic Dry Freight Index has zoomed 300% higher to stratospheric levels. 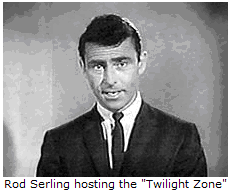 It's like entering "a fifth dimension beyond that which is known to man, what lies between the pit of man's fears and the summit of his knowledge.

It is an area called "the Twilight Zone," Mr Serling explained. And could it be? The fifth dimension that lies ahead is hyper inflation, plus the re-ignition of the "Commodity Super Cycle"...?

Money is still pouring into commodity indexes to diversify portfolios, amid recent financial market turmoil, reaching $120 billion at the end of the second quarter, up 50% from a year earlier.

Food and energy prices are sharply higher from a year ago, and this time, the surge in these "volatile components" of inflation is not a flash in the pan. But remember, you're in the "Twilight Zone" where perception is more important than reality, and emotions often trump logic. Putting it another way, "there is nothing so disastrous as a rational investment policy in an irrational world," explained JM Keynes.

Watch the dollars & cents in the commodity markets

When operating in the "Twilight Zone," traders should focus on the dollars and cents that flow thru the global commodities markets, for real-time indications about the direction of inflation, and not rely on inflation stats conjured up by government apparatchniks. Since the Fed's last rate hike to 5.25% in June 2006, the Dow Jones AIG Commodity Index has been trapped in a sideways trading range between the 160 and 180 levels, but still up six-percent from a year ago.

However, on Sept 18th, Fed chief Ben "B-52" Bernanke, finally showed his true colors, exposing himself as a radical inflationist, by slashing the fed funds rate a larger than expected half-point to 4.75%. The Bernanke Fed panicked, lost its cool, in a desperate attempt to bailout Wall Street brokers who peddled toxic sub-prime US mortgage slime around the world, and saddled banks and hedge funds around the world with losses to their balance sheets that can exceed $150 billion. 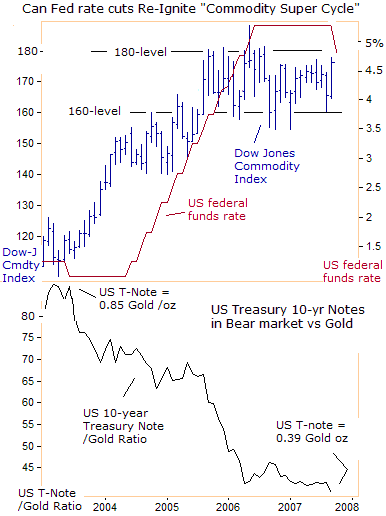 To defuse the credit crunch and still fend off inflation, Bernanke could have chosen the middle ground, by simply lowering the discount rate by a half-point. Instead, Bernanke chose the most aggressive action, by slashing the fed funds rate. Looking at the chart above, what impact would a series of Fed rate cuts have on the DJ Commodity Index?

The Sept 21st edition of Global Money Trends presents a forecast for the DJ Commodity Index and a Sweet Sixteen model portfolio could inflate from Fed rate cuts and a further expansion of the US money supply.

What's the worst possible investment to own during a series of Fed rate cuts? During the DJ Commodity Index's great bull run from 2003 thru mid-2006, when it climbed 56% to a 24-year high, there was simultaneous bear market for US Treasury Notes, when measured against the Gold Price.

This is the predicament that China finds itself in today, with an estimated $900 billion stashed away in rapidly depreciating US bonds, which have collapsed from 85-cents on the Dollar to as low as 39-cents today, when measured against an ounce of glittering Gold Bullion.

Can the Fed re-inflate subprime mortgages?

Toxic US sub-prime mortgage slime, has infected the biggest brokers on Wall Street, bond mutual funds, and the world's largest banks. Its latest victim, via the global credit crunch that resulted, is Northern Rock, the UK's fifth largest mortgage lender, now bracing for a takeover after its shares collapsed and its customers lined the streets to withdraw their money.

To make matters worse, about 5 million adjustable-rate US mortgages (ARMs) are slated to reset in the next 18-months. More than two million of these ARMs are sub-prime and as many as 600,000 sub-prime borrowers could lose their homes, weighing on an already weak housing market. The US housing slump could deepen if sub-prime borrowers who took out ARM's in 2004 and 2005 to secure low teaser rates for the first two or three years of the loan are forced to refinance their loans at higher interest rates, while home values stagnate or fall.

Already, there are glaring signs that the US economy might be headed for a recession. Pending sales of previously owned US homes fell by a surprising 12.2% in July, while the supply of unsold homes reached 9.6 months, a 16-year high. And the US economy unexpectedly lost jobs in August for the first time in four years. Former Fed chief "Easy" Al Greenspan, said on Sept 16th, he expects "as a minimum, large single-digit percentage declines in US house prices from peak to trough, and would not be surprised if the drop was in double digits," he warned. 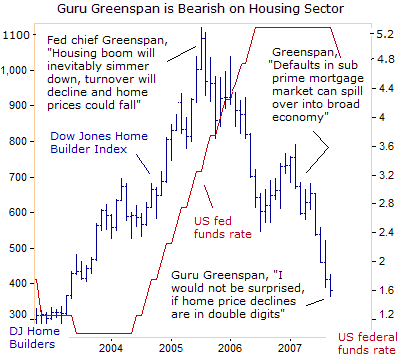 "There is a significant risk of a recession. Downturns in housing construction have almost always been followed by a downturn in the economy, by a recession. My judgment is there is enough of a risk that the Federal Reserve should be responding by cutting interest rates," Feldstein said on August 31st.

Since the credit market crisis unfolded in early August, the Bernanke Fed has pumped $292 billion of morphine (repos) into the banking system, the most since the September 11, 2001's terror attacks on the United States. Not all the morphine has been withdrawn however, and as a consequence, the growth rate of the M3 money supply expanded to 14% in August, and gold has jumped to $725 per ounce.

Some Fed officials deny the linkage between the explosive growth of the M3 money supply, which the Fed is trying to hide from the public, and inflation. On Sept 11th, Fed governor Frederic Mishkin said he "did not find gold to be a particularly useful indicator of inflation."

But surprisingly, it is former Fed chief "Easy" Al Greenspan, would pegged the US fed funds rate below the inflation rate for three years, who is ringing the alarm bells about a resurgent Gold Market. 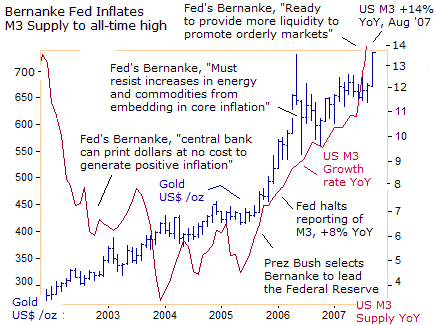 Greenspan advised "B-52" Bernanke to avoid cutting rates too aggressively because "the risk of an inflationary resurgence is greater now" than when he was nurturing the sub-prime mortgage mess. "Our problem over the long run is the re-emergence of inflation. As economic globalization winds down, the forces that have kept prices down will disappear," he said on Sept 15th.

"Inflation in the United States could rise to a rate of between 4% and 5% a year," Greenspan said. In an interview in the Dutch newspaper NRC Handelsblad on Sept 17th, Greenspan predicted that inflation will also rise to 5% in Europe, adding that "the 5% inflation level is more fitted for an economy that functions on a paper standard, where the currency is not linked to gold. The Fed could keep inflation lower, but to do so, it might have to raise interest rates into the double-digits."

This article is just the Tip of the Iceberg of what's inside the Global Money Trends newsletter. Only $175 per year for "44 weekly issues"...including access to back issues and future audio broadcasts during Asian trading hours...click on the hyperlink below and order now: