END_OF_DOCUMENT_TOKEN_TO_BE_REPLACED

Priced in Gold Coins, wheat has never been cheaper in history...

QUICK – name an asset, publicly traded, that is the cheapest in a hundred years, says New York asset manager, and author of Gold: The Once & Future Money, Nathan Lewis in The Daily Reckoning.

Not too many, are there?

Now here's a tougher one. Name an asset that is near the lowest price in all of human history.

The answer is: wheat.

Actually, the entire agriculture complex, including corn, beef, pork and beans could fit this description. But for now we will focus on wheat.

Wheat? Didn't that just leap higher? Aren't we wringing our hands about the high price of wheat?

People don't realize how cheap wheat is today, even after its recent gains. In 1904, a bushel of wheat cost about $1.00. That was in 1904 Dollars. Since a $20 Gold Coin contained about an ounce of gold in those days, your $20 gold coin would buy about 20 bushels of wheat. This was a typical price until the mid-1960s.

Today, your $20 gold coin (it could be the very same one) would buy about 187 bushels of wheat. Since there are 60 pounds in a bushel, that would be 11,220 pounds of wheat. At today's $7.74/bushel, a pound of wheat costs about $0.13 wholesale. Combined with a little meat and vegetables, it would feed a man for a day. 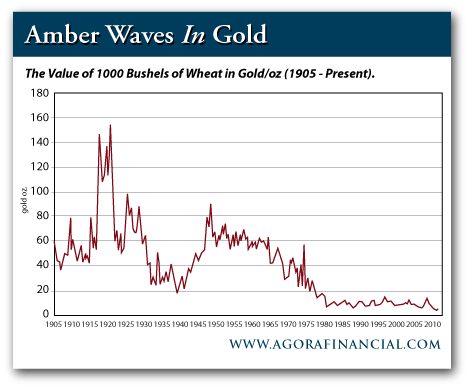 We can see that the price of foodstuffs fell dramatically beginning in the late 1960s. This could be ascribed to the "Green Revolution", which increased crop yields dramatically. However, even if we take just the last few decades, we see that wheat has fallen to very low levels, when compared to the eternal money of gold.

(These month-end values are updated to December 2010 by the way...) 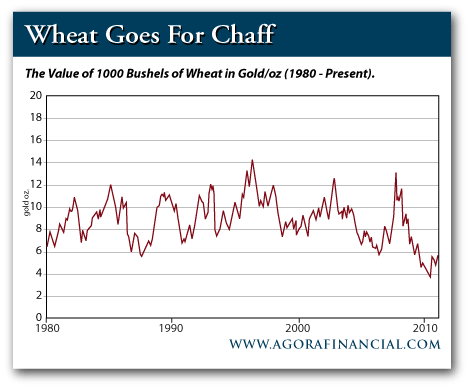 Commodity values across the board fell against gold during the 1970s, and never really recovered. So, it is possible that grain values will fall to an even lower plateau during today's currency devaluation episode.

However, we know that wheat is never going to zero. The downside is limited. Actually, it is getting a little difficult to grow wheat these days, mostly due to continuing strange weather. Less supply. On the demand side, multiple billions of people mostly in China and India are adopting a more westernized diet, and they now have the money to pay for it. More demand.

I don't know what will happen to wheat over the next ten years. However, I suspect that it could do better than stocks, bonds, real estate, and even silver and Gold Coins.

Get the safest gold at the lowest costs using world No.1 online, BullionVault...