END_OF_DOCUMENT_TOKEN_TO_BE_REPLACED

Gold in a bubble? People would be talking of little else at cocktail parties if so...

EVERY MID-APRIL, I mark a sort of anniversary, writes Chris Weber in Daily Wealth.

It was this time, nine years ago – back in 2001 – that I put what was for me a large percentage of my assets in gold and gold stocks.

At the time, I saw that gold was looking very good on the charts: its recent lows were for the first time higher than the previous lows. Then there was just a feeling I was getting that the 20-year bear market was over. At the time, the idea of investing in Gold or gold stocks was regarded as laughable, a relic from another generation.

At the start of 2002, I first talked about gold with my readers, recommending some gold stocks. I had to be careful even then, because writing investment newsletters as I have since 1974, I learned long ago that you can't get too far ahead of your readers. If you suggest something that is totally off of their radar screens, they will not be happy.

Also, between the time when I first bought the gold area in April 2001 and the time I first mentioned it in February 2002, I told three people what I had done. First was my brother. He looked at me with an expression of pity and sympathy. Next was my neighbor and good friend. He looked at me like I was crazy. Finally was a friend of mine in the gold-mining industry itself. He told me I was much too early, that he saw no end to the 20 year bear market anytime soon.

I relate this to say that the best investments I've made have been at the time when most everyone else thinks you are deranged for even talking about them.

I can tell them that most of them will sell too early: That's just the way bull markets work. The number of people who can get into a bull market near the start and hold until near the end has always been small. I'd be surprised if it is as much as 5%.

And I know that nothing I can say will stop them from selling. At least they bought and got some of the benefit from their investment. That's more than nearly everyone else can say.

Going on from that, I still ask people I meet, when investments come up, if they own gold, silver, or platinum. Nearly no one does. The most I have gotten is "I have about 5% of my money in it, mostly in the stocks." Since most people's biggest asset is their house, then taking it from a total net worth basis, this becomes less than the 5% mentioned.

Now they are living with the hangover from that heady time. I know one man in Palm Beach... he owns five houses either there or in Aspen, Colorado. Only one of them is rented out. He has to pay the electric bills each month, and the property taxes each year. Money is flying out, but not much is coming in. He wants out, but he doesn't want to sell at any price below what he paid. There are a lot of people like that. When they bought, real estate was in a bubble: Everyone thought they could buy and then flip the property to someone else.

How many people today think that way about gold or the other precious metals? Precious few. In fact, I know a couple of economists from decades ago. One of them visited me recently. He's reached a high level of fame and influence in his profession, but he doesn't understand investments. In fact, I could have started a very successful fund based solely on doing the opposite of what he thought was a good investment over the last 15 years or so.

His question to me: "Don't you think gold is in a bubble?" To be fair, he thought the same thing back when gold was $700.

No, Gold is not in a bubble. What's happening is what has been happening since 2001.

Governments around the world have decided the way to get ahead is to cheapen their currencies. When all of them do it, it takes more of them to buy the same amount of gold.

Just recently, gold went to record prices in terms of the euro, the pound, and the Swiss franc. If gold rises just 5% more in US Dollar terms, it will be in new record territory here as well.

Gold has been going up for nine years now. 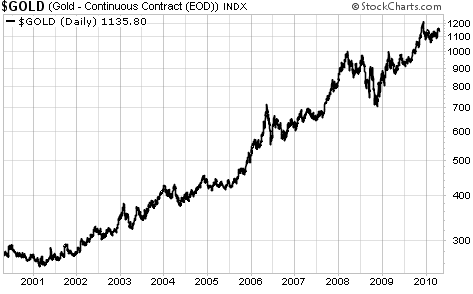 Imagine what would happen if your local stock market or real estate market had a chart that looked like this. People would be piling in and talking about little else at cocktail parties.

But when was the last time you attended a gathering of people you know who rattled on about how much they were making in platinum or gold? For me, it hasn't been since 1979.