END_OF_DOCUMENT_TOKEN_TO_BE_REPLACED

Just how much gold is there compared to paper wealth today...?

Precious-metals research firm GFMS reports central banks around the world bought more gold in the second quarter than they sold for the first time since 1987. And consider this:

So let's get this straight: China and Russia are Buying Gold, several European countries have ceased selling their gold, and central banks are net buyers. Wall Street is also piling into gold. John Paulson, the most successful money manager of 2008, has made a $4.3 billion bet on gold and gold stocks. David Einhorn, Paul Tudor Jones, and Jim Rogers have all purchased gold this year, too.

And just last week comes this news from the Financial Times: The world's wealthiest families are also switching to gold. "Two-thirds of the 100 respondents to a survey by the Family Office Channel, a new website, said that super-rich families are now more likely to invest in gold and other commodities."

These trends are real and they're pushing gold higher by the day. But the real fireworks will start when Main Street catches gold fever. The gold market is tiny; ergo, any panic out of the Dollar by the general public will send Gold Investments into the stratosphere. As Doug Casey likes to say, "It'll be like trying to push the contents of Hoover Dam through a garden hose."

But what exactly does a garden hose look like?

If we added up all the gold ever mined on the planet, its total value would equal no more than $5 trillion at today's prices. Yet, look at how this compares to the debt and bailouts and other monetary mischief of current governments... 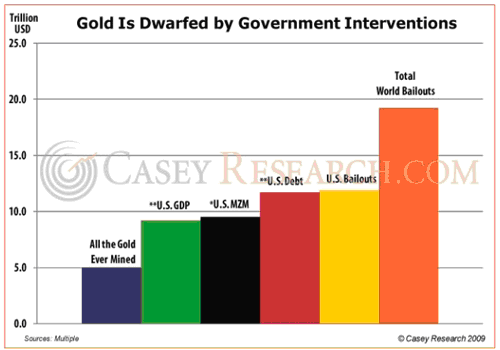 * MZM (Money of Zero Maturity) is a measure of the liquid money supply in the economy. It consists of coins and currency, checking accounts, savings deposits, and money-market funds.

Let's make this chart very clear. Of the $5 trillion in gold ever mined...

The implications are undeniable: When the greater public rushes into gold – whether in response to inflation, Dollar woes, war, whatever – the price will be forced up by an order of magnitude.

While physical gold will protect our wealth, it's the gold stocks that can potentially make us wealthy.

Once again, to get a sense of the Lilliputian size of the gold industry, I compared it to several other leading industries and stocks. 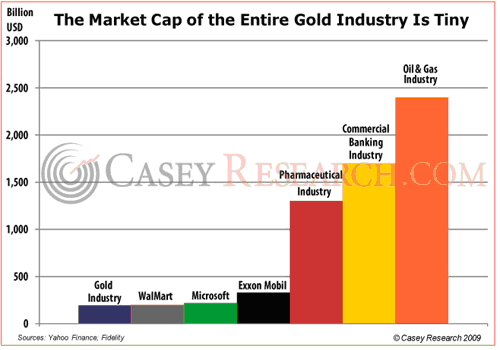 The value, as measured by market capitalization, of all gold producers around the world is less than Wal-Mart's. Every gold stock would need to nearly double just for the industry to match ExxonMobil. The oil and gas industry is about 12 times bigger.
When your neighbors and relatives and co-workers and friends all start clamoring to Buy Gold stocks, the pressure on prices will be enormous, rocketing our positions upward.

Just putting these charts together stirred my feelings of restlessness, making me anxious for the mania in precious metals to arrive. But the timing is not up to us. Be patient. If you're invested in gold and high-quality Gold Mining stocks, you're on the right side of this trend.