END_OF_DOCUMENT_TOKEN_TO_BE_REPLACED

EVER SINCE the demise of the Gold Standard, monetary authorities have tried as many ways as possible out there to sideline gold as part of the monetary system, writes Julian Phillips at the GoldForecaster.

Since the early Eighties, they have succeeded to some extent, but this was by discrediting gold and by emphasizing the benefits of paper currencies. Paper money in a paper system was working very well, and everybody felt that much more prosperous, and so ignored gold's departure. The developed world then had a full twenty-five years of solid growth.

But then began the real rise of the east, in particular East Asia. And then, in mid-2007, a 'credit crunch' knocked the stuffing out of the solidity of the Western banking and financial system.

Seven years before that crunch, when booming assets were enriching the developed world the most, the Gold Price also started to rise, when it was realized that central banks were not keen to sell all their gold at all. Only small amounts were sold and the bulk stayed in the vaults of central banks. So why is gold still in the system at all?

In 1999 the announcement of the 'Washington Agreement' laid emphasis on central bank held gold, stating that "Gold will remain an important element of Global Monetary Reserves".

This commitment has been emphasized in subsequent agreements. Yet if central banks were so keen to get gold out of the way, why didn't they keep selling gold constantly until, like silver, it was out of their reserves entirely? The purpose of that statement is critical to the understanding of gold in the monetary system.

Many analysts state that gold is a useless reserve item because it does not earn any income. Quite frankly this is a fatuous argument, because as any good fund manager knows, investments are measured on the basis of 'total return', not just on income. A glance at gold's total return puts it a huge distance ahead of other reserve assets in central banks.

When a currency loses credibility it is unacceptable as an international asset. It is not accepted in payments for goods. It is sold quickly by foreign holders and becomes an entirely localized means of exchange. A look into the history books shows us many examples of currencies that have become unacceptable outside their borders and many that failed miserably inside their borders. With politics and local demands influencing money management, a solely paper money system has been subject to debilitating influences often. Even a look around the currency world today highlights many currencies that are not managed solely with their international exchangeability and value in mind. The US Dollar leads the way in that herd.

When this happens to the point of damaging the international reliability and value of a currency a real danger exists, because that 'reserve tank' of reserves becomes a lifeline to that country in the event that other nations start to turn away from the currency.

Now we have perspective on the value of reserve assets, "in extremis". Take a look at US gold reserves as a percentage of their reserves... 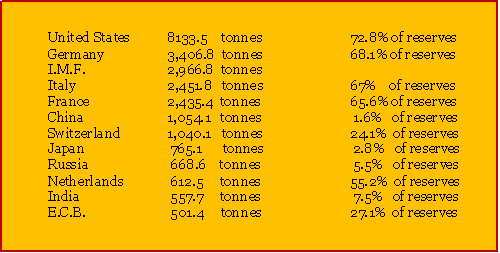 Please note that the percentage that Gold Bullion occupies in reserves rises with any rise in the gold price. That's why a swap is preferable to an outright sale when it uses gold to raise cash. It allows the central bank to benefit from such a rise, receiving its gold once again at the end of the swap's duration.

Here at GoldForecaster, we expect the Gold Price to keep on rising, reflecting falling confidence in all currencies and acting as one would want a reserve asset to act. While a local currency will fall against all currencies gold will rise against all currencies, even the ones deemed sound, as in the last decade. But in extremis, look back across the last three years and note these points about the developed world's monetary system:

Gold should not be measured for its liquidity and value in times of growth and global financial health because that's not when gold is likely to be used as reserve assets are designed to be used. Reserve assets are there for times of financial stress or worse. In really extreme times (not necessarily as bad as wartime), what counts in a reserve asset is its ability to settle foreign obligations quickly. It is at that time that gold as a reserve asset comes into its own.

One of the situations we believe is possible in the monetary world is very extreme. Let's imagine that oil producers decide to accept all 'hard' currencies and likewise China does so for its export goods. Let's imagine too that the Yuan invades the currency markets of the world. What will lie ahead for the US Dollar? With the quantitative easing that is needed currently, it is possible that the Dollar will lose a significant portion of its global use and will tumble on foreign exchanges. The currency turmoil ensuing would encourage other nations to ask for more than simply the Dollar in payment. Its gold reserves would have to come into play, even as backing to a Dollar/foreign currency swap. By that time, the Gold Price would be considerably higher than at present, possibly even multiples of present prices. Would gold be liquid enough to satisfy foreign obligations then?

Thanks to the excellent work of the World Gold Council in London we can see in measured terms just how liquid it is. At the moment, before the scene we drew exists, gold liquidity is third after US Treasuries and Japanese bonds. Gold is two to 6 times more liquid than UK gilts and twice as liquid as US federal agency securities. This measure is against the gold recently traded on the London gold market alone. If we were to add the rest of the gold traded worldwide its liquidity would jump still more, today.

Now factor in the above scene. Japan is heavily dependent on the US for its own financial stability, so the liquidity of its bonds would follow that of the States. Gold would then undoubtedly be the most liquid reserve asset out there.

We believe this scene is possible, not yet probable, but possible. That would certainly move gold confiscation onto the agenda of the US economy if it had not already happened.