END_OF_DOCUMENT_TOKEN_TO_BE_REPLACED

What's the point of Gold Bullion reserves, if not to be sold when times are hard...?

SINCE the start of the fourth Central Bank Gold Agreement last year on September 27th, gold sales by European central banks have been nearly non-existent, writes Julian Phillips at GoldForecaster.com.

This slump in gold sales came before the Euro began to implode, however. Now fractures have appeared in the Eurozone itself. Governments have to fiercely cut back expenditures. They must do this to the extent that the reaction is certain to be social unrest.

As it is, Greece is not only suffering already but its key revenue driver, tourism is suffering badly (25% down already this year). So cutting tax revenues and balancing the government's books is even more difficult. To many people out there, the gold holdings of such banks should be sold to shore up such shortfalls. But would European central banks agree?

Take a look at the table here (supplied by BullionVault). In all cases, the contribution that the proceeds of gold sales could make would, in all cases, barely dent the problem. 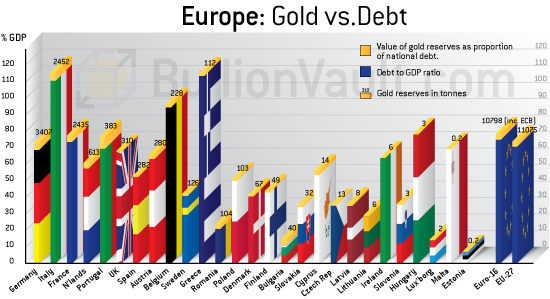 So selling gold is not a cure for Europe's national debts. But you may ask, what purpose do gold reserves serve, if not to be sold when times are hard? The only way to answer this is to take an individual as the nation.

Imagine this individual has some gold hidden away for a rainy day. He is asked by his bank manager to repay his overdraft, but he can't – not without a long-term plan to pay it off slowly against income. His bank manager tells him to liquidate his Gold Bullion and put that into the account. But if he were to do this, selling his final "back-up" reserve, any emergency that hits him out of the blue from then on will simply destroy him financially.

So he decides that when those dire times hit, he will keep his gold for the time when nothing he says and does is believed or accepted. Then, when he produces gold it has a value that his actions cannot affect. It has a value everywhere to anyone. This external value is what will keep him in business and allow him to slowly recover. Essentially that is the role of Gold Bullion as a reserve asset.

You may then ask why European nations chose to sell gold starting from the late 1990s. But every time nations sold gold over the last 35 years it has been not to raise emergency funds, but to try to give credibility to a new role for a currency.

The US did it in the 1970s, as the US Dollar – as well as being the world's petro-currency – went international. Nixon cut the Dollar's link with gold first in 1971. The Treasury then sold gold throughout the decade that followed.

The International Monetary Fund (IMF) sold gold in the late 1970s because it and the US wanted the Fund's Special Drawing Rights to replace gold in the monetary system. (note that national governments would not accept this, which is why the SDR remains a paper currency only in the IMF's books.) Then, in the late 1990s and early 21st century, Europe sold gold when the Euro was launched.

In the first two instances, the impression was given by the US and the IMF that gold sales would go on until gold was no longer part of the system. This forced the price of gold to fall from its peak of $850 to $275. Accompanied by "accelerated production and sales" of gold in the market, this campaign was believed, until this century.

But when European central banks decided to sell, they emphasized that it was still an important reserve asset and that they would sell no more than a maximum amount. The removal of the unlimited gold sales allowed the market to quantify the impact on the Gold Price. As a result, the Gold Price has moved from just under $300 to the peak of $1250 thus far – an average price increase of 43% per annum on the lowest price.

Now, no longer a "barbarous relic" as J.M.Keynes called it during the Great Depression, gold is preserving value at a time when currencies are losing theirs. Each week in the GoldForecaster newsletter we report the activity of central banks in the gold market, and while Eurozone selling has been minimal, other central banks – notably in Asia – have bought over 350 tonnes since September of last year.

Behavior was similar in 2009 when over 400 tonnes of gold were bought by central banks in total, and sales turned to a trickle. Since February of this year, European central banks have sold just one tonne of gold between them.

The true value of gold for a central bank – and for a nation – is that when its currency is threatened, whether by deflation or inflation, confidence falls in national currencies. Amid the worst circumstances of war-time, gold is exchangeable, even between enemies. This quality transcends its value as "just" money.

Fortunately, of course, we are not there yet. This is not such a desperate time that all else has failed. So central banks will keep a firm grip on the gold they have, for now, while others with too little – particularly in Asia – will do all that is reasonable to acquire more.

Ready to Buy  Gold for your personal reserves...?