END_OF_DOCUMENT_TOKEN_TO_BE_REPLACED

The value of saving in Gold Bullion...

SETTLE DOWN and I shall tell you a tale, writes Jeff Clark, editor of Big Gold at Casey Research.

A young woman – let's call her Andrea – inherited some money from her father in late 1997. She was only nineteen at the time. Not knowing the first thing about investing, she kept the money in stocks and bonds as her father had, wanting to hold on to it until she really needed it. She played it "safe."

She got married last year and so began to withdraw the money. She was pleased to see a chart from the broker that showed her portfolio was up about 20%. While admittedly not a great return over 12 years, her account had nevertheless survived both the 2000 tech crash and the 2008 market meltdown. She knew not all investors could say the same thing.

Andrea began spending the money, thankful that she'd saved the money to start a family. But a cruel reality slowly began to set in: the money didn't seem to be going very far. She couldn't quite put her finger on why, but it all clicked when she saw the lofty price of a new SUV she wanted. She remembered her Dad's favorite vehicle back in the day – a Ford Ranger pickup – and recalled him boasting that he paid only $8,500 for it in 1992. A comparable vehicle today costs more than twice as much.

It hit her like a slap in the face. While the number of Dollars in her portfolio was greater than what she inherited, they bought less stuff. It was such a revelation that she actually uttered the words out loud...

"My investments didn't keep up with inflation... I LOST money!"

Whether they realize it or not, the same thing is happening to most people's investments. Over time, real returns are diluted because of inflation. The only reliable way to measure the value of investments is in terms of a financial intermediary that cannot be inflated: gold. That way, investors can tell how they're doing in real terms.

This has practical ramifications for all of us. Someday, we (or our heirs) are going to spend some of the wealth we are accumulating. How much we can actually buy with our gains will directly depend on how hard inflation has hit whatever our investments are denominated in. A 15% gain in Dollars is only 9% in real terms if USD inflation was 6% during that time frame. A money-market return of 1% is a losing investment if denominated in something inflating at 3%. In Andrea's case, by keeping all her funds in Dollars, her 20% gain turned into a 16% loss in purchasing power.

In other words, since most people don't adjust for inflation, their investments are not doing as well as they think.

In contrast, if Andrea had kept part of her inheritance in gold, that portion would have grown 332% (from December 1998 to June 2010, when she got married). More importantly, she would have lost no purchasing power during that time. In fact, after inflation and taxes, Andrea could've bought 50% more in goods and services than in 1998, if purchased using liquidated gold. She could buy two small pickup trucks today with the same number of gold coins it took her father to purchase the Ford Ranger in 1992. (This all while gold went nowhere for those first three years and lost a third of its value in the fall of 2008.)

With gold as her savings vehicle, she could have completely sidestepped the erosion in the Dollar.

How have you done?

To demonstrate the effect of currency dilution, we've developed a tool for re-indexing popular indices from Dollars to gold. Doing so provides a more accurate picture of the dilution of investments made in Dollars (and would work just as well in Euros or other currencies). We use gold in grams so the indices won't be priced in decimals.

Here's how the DOW has fared since 2000 when measured in both Dollars and gold: 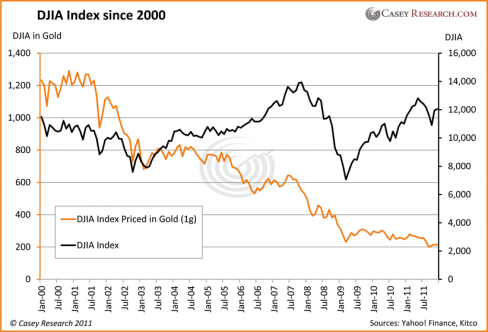 In other words, investments made in the DJIA Index have not only lost money in real terms, they're worth a pittance when measured in gold. This is a breathtaking loss.

How about a broader measure of stocks, like the S&P 500? 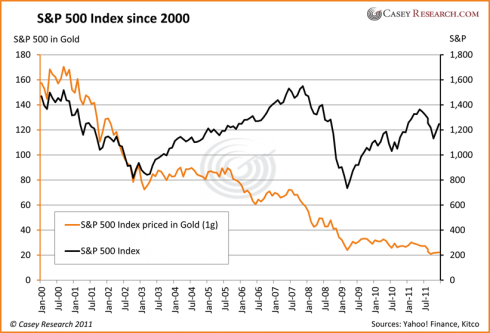 The S&P 500 is down 15.1% in Dollars since 2000, but it's lost 85.8% against gold. If you've owned an S&P index fund, you not only have fewer Dollars that what you started with (excluding dividends) but have fallen dramatically behind when compared to the monetary asset of gold.

How about the technology sector? 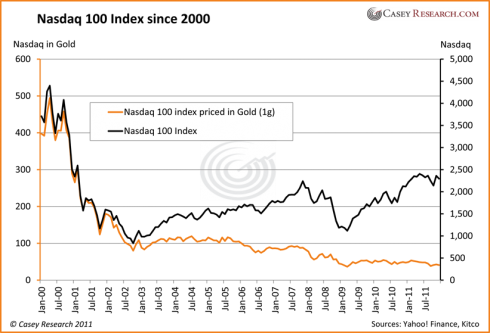 Tech stocks show a whopping decline of 38% in Dollars over the same time period, but money invested in that sector has lost 89.7% when measured in gold grams.

We also decided to look at some foreign markets. Are they doing better than the US? 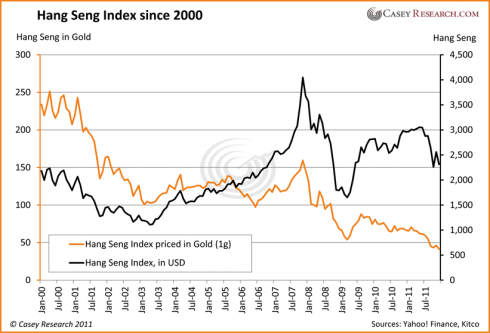 The stock market for Hong Kong, one of the largest exchanges in Asia, shows an increase of 6% in Dollars. However, it's lost 82.3% when priced in gold. 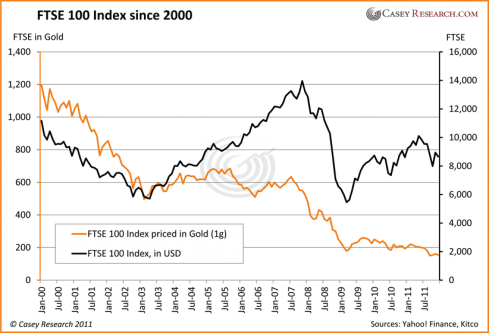 The primary stock market for UK companies is down 22.4% since 2000 calculated in Dollars, but has fallen 87.1% in gold grams.

Obviously, measuring portfolios in Dollars exaggerates performance in real terms. This isn't to say that one shouldn't invest in stocks. It means that one must: a) be cognizant of how results compare to gold or other real assets that one might buy with whatever currency one is dealing with; b) adjust brokerage statements to allow for currency dilution; and c) not rely on stocks in general to outpace inflation.

In fact, it isn't just investments that are eroding. Our entire world is being devalued, even as one reads this article – from groceries and gas to cars and college. Someday we'll want to spend the gains we're making; how will we avoid the long-term erosion of the currencies we invest in?

The answer is simple: save in gold. The Dollars you keep in a money-market account will steadily lose value year after year. In fact, monies deposited into a simple savings account in 2000 have lost an incredible 25% of their purchasing power since then. Conversely, if those savings were denominated in gold, the wealth would have not only been preserved but increased. We believe this trend will continue – and accelerate. It will become increasingly important to your financial future that you cash in earnings from time to time and save them in precious metals – not in Dollars, Euros, Yen, Yuan, or even Swiss Francs.

Don't make the mistake Andrea did. Save in gold. That new car or retirement home or world travel you want to spend money on someday will be a lot easier to afford if your savings are denominated in the one asset that can't be debased, devalued or destroyed.