END_OF_DOCUMENT_TOKEN_TO_BE_REPLACED

MARTIN MURENBEELD of Dundee Wealth Inc. is long both on opinion and the gold market, says the Gold Report.

"Gold Bullion is in a long-term bull market. And that's going to go on for a number of years," he predicted during the recent Forbes & Manhattan Resource Summit in West Palm Beach, Fla. His remark was included as one of a handful of reasons to be bullish about gold and commodities.

Martin noted that economists have known for some time that the retirement of baby boomers would create fiscal "stresses" unlike the world had ever seen. It would have been ideal, he said, if the world's developed economies had entered that period with budget surpluses but the onset of the global recession in 2008 made that notion impossible.

"Because of the 'Great Recession' we're going into the baby boom-retirement phase with some of the greatest deficits in peacetime history," Martin said.

Compounding that is something he called "convergence," a phenomenon whereby financial markets are giving poorer European Union countries like Greece and Ireland the same lending terms that such wealthy EU countries as Germany and France receive, sometimes as low as 3%.

He asked rhetorically, "What does a pathological borrower do when interest rates drop from 15% to 3%?"

But before you could dismiss those issues as faraway problems in faraway places, Martin took aim at North American fiscal policy.

He used two charts to aid his point. The first was from the US Congressional Budget Office, the second from the Canadian Parliamentary Budget Officer Office. The message of both charts was identical – that, with current trends, the debt-to-GDP ratio would exceed 200% in both countries by the mid-21st century. A third chart outlining the debt-to-GDP ratio in Greece showed a similar growth curve.

The impact of the great recession was further illustrated by another slide that showed the US, Canada, Japan, Germany, France, Italy, UK, Greece, Portugal, Spain, OECD (Organization for Economic Cooperation and Development), China and India had all posted budget deficits in 2009.

Most of these deficits, Martin said, were related to stimulus measures designed to limit unemployment, as high unemployment is bad for "political health."

Yet another slide charted the growth in the US monetary base from 1915 until now. The line was akin to a cobra slithering through the grass, and then rising sharply to strike on Sept. 15, 2008, the day Lehman Brothers went out of business.

According to Martin's chart, from that point until now – about two years – the US monetary base has grown from about $900 billion to about $2 trillion, its steepest rise ever. But, he said, the US Federal Reserve had little choice.

"I'm in full agreement with what the Fed did. The one thing that I have come to know after years of reading and writing about economics is that depressions really get going when you have a totally bankrupt banking system," Martin explained. "If all the banks had failed then, we would be having quite a different conference."

But these borrowing policies have left governments with few ways out. They can renege on promises, cut services, raise taxes or print more money, Martin said.

And what are the implications for gold?

"Money is what drives gold," he said. "We print money and Gold Bullion goes up." 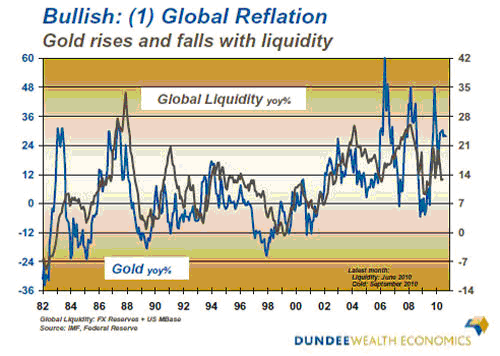 Martin also pointed to America's trade deficit as a growing problem. A chart showed that the US trade deficit declined while the economy was in a recession in 2008 and 2009 and that the deficit is growing again as the country's economy posts modest growth numbers. That led Martin to a remarkable conclusion:
"The way for the US to fix its current account deficit is to continue to have a recession," Martin said in jest.
He noted two ways the US could find its way out of a trade deficit:
Buy fewer goods from the foreign sector; and
Get the foreign sector to buy more from you.
Martin revealed that the US trade deficit with China is pushing $300 billion. He then provided a brief history lesson on the relationship between the greenback and the Eenminbi (RMB). In 1986, it took a little more than RMB3 to buy one US Dollar. Today, it takes about RMB6.8 to buy a buck.
"In the 1980s and 1990s, China specifically devalued its currency to become the most competitively priced country," Martin said. "Now, it's time to give some of that back." He said the US must pressure China to revalue the RMB.
The last time America took a stand on foreign currency values was in August 1971. At the time, President Richard Nixon established a 10% across-the-board tariff in an attempt to drive up Japan's yen and Germany's Deutschemark (now the Euro) after those two countries refused to revalue their currencies.

"It was messy, but it got done," Martin said.

Martin then took issue with China's stockpile of foreign reserves, which total almost US$2.7 trillion.

"In my humble opinion, this is criminal. This is so far beyond what a country needs as reserves that it has become a massively destabilizing force in the world economy," Martin explained.

He didn't let the US off the hook, either. He pointed to America's roughly $300-billion energy deficit – basically, the amount of crude oil the US imports versus what it exports – with the rest of the world and dubbed it a "disaster."

Martin called for changes to US energy policy and recommended incremental increases in the price of oil until it reaches $200 per barrel. He said only then would America use less gas.

"That has to happen," Martin said. "Oil is far too important in chemical feed stocks to be burned up in a car." He used Japan to illustrate his point.

In 1975, OPEC demands sent oil prices through the roof and Japan, which imports virtually all its oil, was hit with a nearly tenfold increase in its energy costs. That, in turn, devalued the yen and forced Japan to become far more energy efficient. Today, Martin says, Japan is a leader in building hybrid cars and uses less energy per Dollar of output than any other economy.

"I pay attention to that when I look at gold because Dollars in the foreign exchange market can end up invested in gold," Martin said.

Global foreign exchange reserves grew by $7.2 trillion between 2002 and 2009, according to Martin, and most of that money found its way into the international capital markets.

"This money has made a hell of a mess of housing markets around the world," he explained. "This was far too much money that got recycled. It should never have happened. And the IMF was asleep at the switch."

And what do central banks do with these reserves? Some are choosing mining investments.

"China has all these damn reserves and it has to get rid of them and, of course, it's decided that the best way to get rid of its reserves is to buy resources for the future," he said. "It can't go into the gold market. If China put $2.6 trillion into the gold market, I wouldn't be standing here. Gold would be what? $15,000-$20,000 an ounce? And I would be a very happy economist."

But some of China's reserves are finding their way into the gold market, albeit slowly. China has 1,054 tons of gold, up from 600 tons just a few years ago. India's central bank recently bought 200 tons of gold from the IMF, as did central banks in Bangladesh and Mauritius.

The central banks in the West, meanwhile, have largely liquidated their gold assets.

"The Indian subcontinent governments have made a statement that they are happy Buying Gold for anywhere from $1,050–$1,250 an ounce," Martin said. "The new guys on the block are very interested [in gold] for a simple reason: Gold is not the liability of another central bank. That is potentially earth shattering. It's certainly a structural change in the gold market."

So is Gold Bullion in a bubble? In real Dollar terms, Martin argued, gold is nowhere near its 1980 high of $850, which translates to $2,385/oz. in inflation-adjusted terms today.  Martin went on to compare oil prices with gold. Gold has traditionally traded at 15 times the price of a barrel of oil, and it's close to that mark now. Oil also peaked in 1980 at about 34 barrels of oil to one ounce of gold. Murenbeeld basically dismissed any notion of gold being in a bubble with the yellow metal trading at around $1,350 an ounce.

"Think of gold today as actually going back to its roots. Central bankers are more interested in the metal. And you and I want to hold at least some gold for precautionary reasons," Martin explained, adding, "hold some gold and hope it doesn't go up. That's my investment view."

Discussing gold's standard investment-demand arguments like currency debasement and "safe haven" status, Martin then took those ideas a step further and proclaimed that gold is "morphing" into an asset class in much the same way the real estate market did through real estate investment trusts (REITs) in the 1990s.

He said that in 2008 global financial assets totaled $117 trillion, with $33 trillion of that in equities (equities declined about 45% that year), $51 trillion in private debt and $32 trillion in government debt. Of that $117 trillion, some $40 trillion was vested in managed assets like hedge funds and mutual funds.

"If you think like I do, that resources and gold are morphing into an asset class, then you say what portion of your portfolio should you invest in an asset class? And I say at least 3%. In fact, I would say 5% but I don't want to overstate my case," he added. "At under 5%, it's just an interesting investment. It doesn't really change the characteristics of a portfolio."

Martin did the math, though, and if 3% of the world's managed assets went into managed commodities, the value would quickly climb to $1.2 trillion. He said there are new gold products out there to lure.

Want to get physical Gold Bullion but don't want the hassles or costs it typically involves? Start with a free gram at the award-winning, mining-industry backed world No.1 BullionVault now...