END_OF_DOCUMENT_TOKEN_TO_BE_REPLACED

WHATEVER ELSE may be going on, there's a real bull market in gold, writes Bill Bonner in his Daily Reckoning.

Today, a quick glance at a chart shows gold looking a little toppy. Expect a correction. But remember, this is a bull market. In a bull market, you buy the dips.

Stocks, meanwhile, are in a bear market. In a bear market, you sell the rallies. This looks like a good time to sell – if you haven't done so already.

"Take Your Gains," says Forbes. And once you're out of stocks, stay out until the bear market is over...probably at around 3,000-5,000 on the Dow. When the Gold Price comes to equal the price of the Dow, it will be time to switch back.

We haven't seen the last of this bull market in gold. It's what you buy when you think government is making a mess of the monetary situation. You put your trust in gold as an antidote...as protection...as wealth insurance.

Are the feds making a mess of the monetary situation? Oh dear, dear reader...please ask us something harder. Trillion-dollar deficits as far as the eye can see...stimulus spending that turns the US into a Zombie Economy...handouts to the bankers...gifts to the carry traders...

The feds are out-doing themselves.

As for the bear market on Wall Street, investors are counting on a miracle...a 'recovery' that doubles corporate earnings in just a couple years. They think it's "just like 1982". Of course, it is just the opposite of 1982...see the chart below.

Besides, there is no recovery...and profits will go down, as businesses compete for less spending.

The recovery may be all in your head, writes Robert Shiller in the New York Times:

"Consider this possibility: after all these months, people start to think it's time for the recession to end. The very thought begins to renew confidence, and some people start spending again – in turn, generating visible signs of recovery. This may seem absurd, and is rarely mentioned as an explanation for mass behavior late in a recession, but economic theorists have long been fascinated by such a possibility.

"The notion isn't as farfetched as it may appear. As we all know, recessions generally last no more than a couple of years. The current recession began in December 2007, according to the National Bureau of Economic Research, so it is almost two years old. According to the standard schedule, we're due for recovery. Given this knowledge, the mere passage of time may spur our confidence, though no formal statistical analysis can prove it....

"Back in 1931, for example, the New York Times attributed the emerging economic cataclysm to a 'mood of pessimism which had been carried to grotesque extremes.' In 1932, it compared reckless talk about 'depression' to shouting 'fire' in a crowded theater..."

It doesn't matter what anyone says. It's a depression. It's nothing like the garden-variety recessions of the Post-War period.

It's a depression because of the nature of the work it has to do. It has to clean up 3 decades' worth of filthy balance sheets. It has to wipe away trillions in trashy consumer debt. It has to defuse trillions more of Wall Street's debt bombs. It has to wash out billions...maybe trillions...worth of bad decisions – houses that are too big, too expensive, too grandiose for their buyers...shopping malls with far too much retail space for the new, thrifty customers...businesses geared up to produce goods and services for millions of people who can no longer afford them.

When will the depression be over? When the work is done.

But wait... the world's government piling up trash faster than the depression can haul it away. And here comes the next mega-crisis!

"US cost of paying I.O.U.'s gets steeper," says a front-page headline at the International Herald Tribune. And over at the Financial Times in London, Gillian Tett asks "Will sovereign debt be the next sub-prime?"

Everyone knows what when wrong with sub-prime. When you lend money to people who can't pay it back, you're asking for trouble. So, if you're out of a job and looking for a sub-prime loan to buy a double-wide trailer you're out of luck. Bankers won't give you a dime.

But now, the world's lenders are doing something just as dumb. They're lending to governments. Imagine you were a banker. And the US government comes to you for a loan.

"Do you have enough income to cover the payments," you ask.

"Well, no..." comes the answer. "In fact, our revenue has fallen off a little. Because of the recession, you know. Like everyone else."

"Uh...we spend nearly two Dollars for every Dollar of income."

"Oh...and you expect us to lend you money? What do you have for collateral? What is your net worth position?"

"We were hoping you wouldn't ask. The most recent tally of our obligations comes to $113 trillion."

"Well, don't you have assets?"

"We have some buildings in Washington...military bases around the world...things like that. But as a practical matter, you could never foreclose on them."

What is interesting is that the world's investors are beginning to see that the United States and many other governments are bad credit risks. This is an extraordinary event. Until now, the US government has been able to finance and refinance its debts at the lowest rates in three generations. Lenders have wanted to lend the feds money, because they believed they were the safest credits in the world.

Bankers can always be counted on to find the worst investments at the worst time. They are at the tail end of the chain of insights that begins with the sharpest, most independent-thinking analysts...runs through the broker and hedge fund community...passes on to the financial journalists and the TV pundits...arrives at the lumpeninvestoriat through the popular media...and finally gets to bankers when they pick up the Wall Street Journal and read about what's going on.

Now the bankers are buying sovereign debt – government paper – because they think it offers a "risk free" return. In fact, it is one of the riskiest investments you can make. This year and next, major governments will need to raise $12 trillion to fund their debts and deficits. That is a huge increase to the world's supply of sovereign bonds. Colleague Porter Stansberry estimates that the US government alone will need to finance $4.5 trillion worth of bonds next year. That amount is twice the total capital of the world's biggest central bank – the Fed. Even if the Chinese took every penny they have in financial reserves and used it to buy US debt, there would still be about $2.3 trillion in bonds left unsold.

As to the cost of servicing the debt, that too is expected to reach breathtaking levels. Even the Obama Administration forecasts the interest payments to increase from $200 billion at present to $700 billion by 2019. This is surely a misunderestimation.

If the deficits rise to the level predicted by former head of the White House's Office of Management & Budget, David Stockman, the national debt will soar from $12 trillion to more than $20 trillion in about 5 years. Lenders are sure to wise up and ask for higher yields. Even a banker is likely to want more than 3.5% interest for lending money to the feds for 10 years. Maybe 5%...maybe 10%. Remember that during the early years of Volcker's time at the Fed, the lending rate rose to 18% on a 10-year Treasury note.

There is also a possibility – which seems remote as of this writing – that a government bond auction could go 'no bid'. It happens. When lenders come to see the risk higher than the potential rewards, even at high yields. And when it happens...or even approaches...the feds will be in the same situation that hundreds of their forebears faced over many centuries.

All governments go broke from time to time. Then, they default. When they run up more debt than they can pay...like a sub-prime borrower...they always go broke.

And here's something interesting. As near as we can make out this is a joint effort by David Rosenberg and Barry Ritholtz. 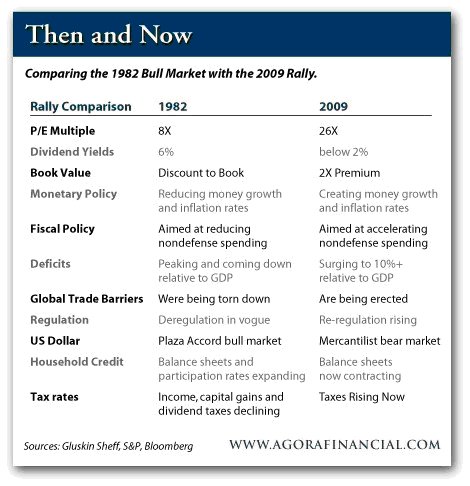 It is an answer to the question: Isn't this just like 1982 all over again?

The short answer: no, it isn't.

Want to Buy Gold today? "If there's an easier way to buy investment gold, I've yet to find it," says one BullionVault user...