END_OF_DOCUMENT_TOKEN_TO_BE_REPLACED

Wells Fargo Private Bank has warned its clients to beware a gold bubble. Their analysis is utterly misguided...

SOME AWFUL gold analysis – courtesy of Wells Fargo Bank. The bank's analysts have told clients, "Interest in gold investing has reached the level of a speculative bubble."

Having thus be-clowned themselves, they went on to elaborate: Gold Prices are volatile, gold doesn't pay a yield, it depends on a "greater fool" for capital gains, central banks are net sellers, it doesn't beat inflation, Warren Buffett hates (and does not understand) it, and you can't eat it, writes Dan Denning, editor of the Daily Reckoning Australia.

Oh dear. The Gold Price in Dollars is volatile because the US Dollar is volatile. An ounce of gold has almost always bought you a nice suit at any time in history. The volatility in the gold/Dollar exchange rate is all on the Dollar's end.

And that's because the supply of Dollars is always increasing. Also, the futures exchanges have been pretty active boosting margin requirements on gold contracts. That's made for some larger-than-normal Gold Price moves. But the value? Rock steady over time, baby.

And that's the point. Gold isn't really an investment. It's money. And it's money that holds value well over time. You only worry about capital gains if you're investing in gold. If you're buying money, you're more focused on preserving purchasing power.

Gold doesn't have a yield? Someone should tell the boys at Wells Fargo that 10-year US Treasury yields went negative in real terms this week (see chart below). Investors are so terrified of the debt super volcano upon which asset prices are built, they are paying rent to Uncle Sam in order to park their money in bonds. 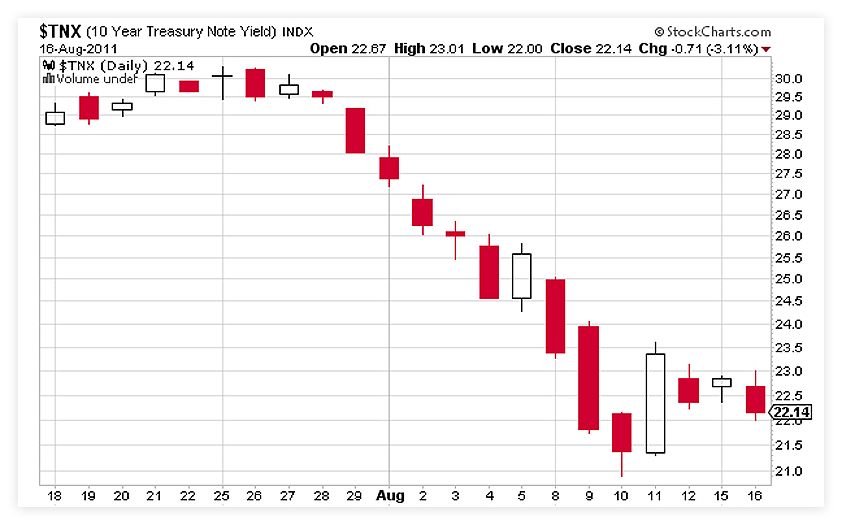 By the way, this willingness to lose some of your capital in exchange for the illusion of safety and liquidity, in the short term, is probably going to be the catalyst for a violent stock market rally. All that money will come out of bonds and into stocks. After all, you have to beat inflation somehow, don't you? This is how artificially low interest rates destroy savings (negative real yields) and encourage speculation in equities.

The claim that central banks have been net sellers "in recent years" isn't backed up by any facts. But in any case, the UK sold all its gold in 1999, near the bottom of a 20-year bear market in gold. Peter Costello, who was Australian Treasurer at the time, beat British chancellor Gordon Brown to the punch when he sold two-thirds of Australia's gold reserves in 1997 for the handsome price of $306.60 an ounce.

You'd expect politicians to say that. You'd expect them to want it to be true. A gold standard was the only check on the permanent expansion of government debt in the early 20th century. That's why it was abandoned. With a gold standard, the Warfare State and the Welfare State are not possible. Get rid of the gold standard and discredit gold as money and you can expand the role of the State to your heart's delight.

Central banks are the largest holders of Gold Bullion in the world. Politicians sold gold because they're stupid, ignorant of monetary history, and think only in terms of election cycles. Most central bankers, Ben Bernanke notwithstanding, recognize that gold is money. Its role in the world's financial system is growing, not shrinking.

Warren Buffett doesn't like gold? So what. Buffett is an investor. Gold is money.

You can't eat gold? Is that so? Well, you can't eat Dollar bills either. You can always sell gold and silver for local currency and buy food, which you can eat. Being a medium of exchange is only one property of money. Just because you can't yet use Gold Coins to buy a Big Mac doesn't mean gold isn't money or isn't useful. Claims to the contrary are ignorant.

We asked  Dr. Alex Cowie, editor of Diggers and Drillers, a natural resource sector-focused investment newsletter, what he thought of the Wells Fargo report. He wrote back:

"They forgot that you can sell gold and buy a room, a hot meal, or an 'efficient' jacket, hat and gloves with the proceeds.

"Their mixed salad of an argument was full of holes, and didn't mention the epic growth in Chinese gold demand that is completely reshaping the market. China is the biggest importer of gold now, and these imports are about to double.

"The reason China and the rest of the world is buying gold is that the financial system is corrupted with debt, bailouts and defaults.

"And who is Wells Fargo's number one share holder?

"None other than Mr Warren Buffett: the world's biggest gold hater. Interesting that the bank's analysts are now quoting him, like lovesick schoolgirls.

'Do something for me,' and [the gold] says, 'I don't do anything. I just stand here and look pretty.'

"Damn right. It does look pretty.

"It also does something that Wells Fargo hasn't done too well in the past. It preserves wealth.

"There's no one to stuff things up with gold. No bungling bankers, no corrupt politicians, no bail outs. And this is why it doesn't need to pay interest – there's no counter-party risk to compensate for.

"As the Octogenarian of Omaha points out – there is very little gold in the world. It would in fact fit into a couple of full size swimming pools. This scarcity is exactly what makes it valuable.

"So as the European and US debt crises continue to unravel in the coming months and years, and more and more Euros and Dollars are printed to plug the shortfalls, gold's scarcity will be more and more valuable.

"So next time you are saving money up to buy some 'shelter, food or efficient clothing', buy some gold to do it with.

The Wells report concludes that:

"Gold is a commodity that should be held as a part of a larger, diversified allocation to commodities that is frequently rebalanced. We do not believe that gold should be utilized as a cash-equivalent, no matter how enticing the price returns have been in recent months."

It's clear Wells thinks gold is an investment speculation. That's why they think it's in a bubble. If the Wells' bankers treated gold like money, not a financial asset, perhaps they'd allocate a lot more of their cash to it. But oh well.

Get the safest gold – stored securely in your choice of UK, US or Swiss vaults – while cutting the costs of gold ownership when you Buy Gold through BullionVault...