END_OF_DOCUMENT_TOKEN_TO_BE_REPLACED

But most remain skeptical or outright bearish. And the blasphemy they purport is that gold is in a bubble.

Let's settle it, right now, and shut these naysayers up. 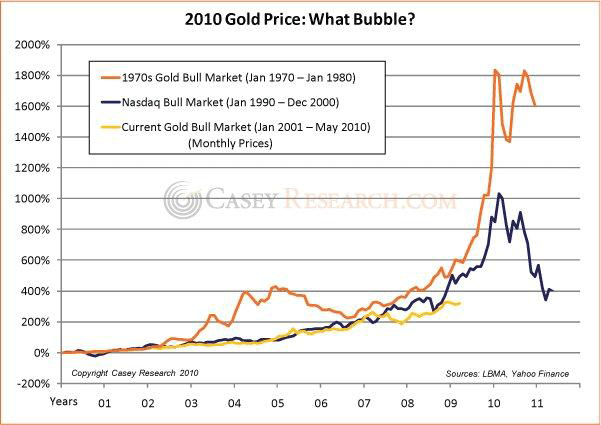 Our current Gold Price is up about 400% (when measured on a daily basis, not monthly as in the chart). And in fact, the Nasdaq gained 182% in the final year of its peak, while gold surged 80% in four weeks during the blow-off top of January 1980.

None of this is (yet) happening to our current Gold Price. So a note to doubters: we've got a long way to go before we start legitimately using the "bubble" word.

Besides, the fact that these skeptics aren't buying gold – and don't even own any gold in the first place – is further proof we're not in a bubble. Ever notice none of them claim to own it?

And they definitely need to catch up on world affairs. The World Gold Council (WGC) reported that Russia, Venezuela, the Philippines, and Kazakhstan all bought gold in the first quarter. Central bank sales, meanwhile, remain depressed.

Russian President Medvedev won't quit his quest to move international reserve assets away from the dollar. And his country's central bank is backing up his words; it increased its gold reserves by $1.8 billion and decreased its currency reserves by $6.6 billion so far this year.

China, the world's largest gold producer, already buys all the gold produced within its country. But the WGC recently forecasted that overall gold consumption in China could double in the coming decade, a demand that production certainly won't be able to match.

The Iran/Israel showdown appears closer almost every week. As further evidence that each side is preparing for conflict, Saudi Arabia recently agreed to permit Israel to use a narrow corridor of its airspace to shorten the distance for a bombing run on Iran – all done with the agreement of the U.S government. Simultaneously, the UN Security Council imposed a new round of sanctions on Tehran. Nobody appears to be backing down.

And the current run in gold is with no inflation. Core CPI has fallen to the lowest level since the mid-1960s – but what happens when inflation does set in? And what if it's as bad or worse as the 14% rate we got in the '70s? Sure, deflation is the immediate concern, but with a US federal debt of $13 trillion, unfunded future liabilities exceeding $50 trillion, and a current budget deficit of over 10% of GDP, a massive debasement of the dollar is virtually ensured, triggering an onslaught of inflation. It's coming.

With all these concerns, these guys don't want to Buy Gold?

Bubble, schmubble. Stocks are vulnerable, bonds are toast, currencies are fiat. Other than cash, where are you going to put money right now?

Gold could correct, of course, and I frankly hope it does. I'm not counting on it, though. The price is just as likely to head the other direction. But if it does temporarily fall, while the bubble-heads are smirking, I'll be buying.

How best to Buy Gold today? "If there's an easier way, I've yet to find it," says one BullionVault user...