END_OF_DOCUMENT_TOKEN_TO_BE_REPLACED

The Bank of England has hit the panic button. UK gold buyers are the biggest winners...

BACK IN APRIL 2008, writes Gary Dorsch of Global Money Trends, the Bank of England's leading dove, David Blanchflower, warned that UK house prices could tumble from their record peaks.

Blanchflower called for swift rate cuts to stave off a crash, warning that, "in my view, a correction of approximately one-third in house prices does not seem implausible in the UK over a period of two to three years if house price-to-earnings ratios are to be restored to more sustainable levels.

"Cutting interest rates now may help to prevent such a dramatic fall. Monetary policy, in my view, still remains restrictive, and we need to take action to loosen policy sooner rather than later," Blanchflower added.

"The slower rates fall, the further they will eventually have to go down, in order to boost the economy."

Come late October, and a report from Standard & Poor's indicated that 335,000 households in Britain now find themselves in negative equity, meaning that the value of their homes has fallen below their mortgage. This was an increase of 250,000 in only four months. And by 2010, S&P predicts, two million UK-households could be mired in negative equity, with home prices tumbling a further 10% in 2009.

Housing sales were already 53% lower in Sept. compared with the same month in 2007. 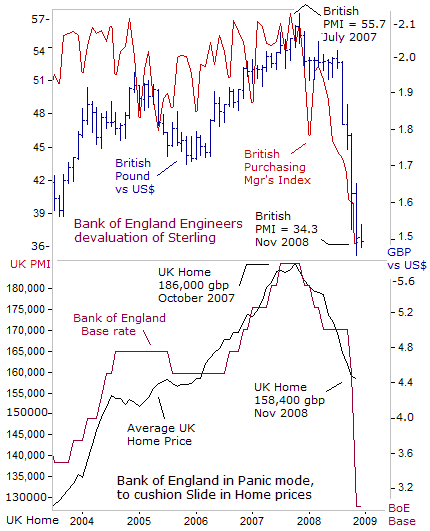 What to do? On Nov. 29th, the British government handed a check for £20 billion to the Royal Bank of Scotland (RBS) and will also buy about £17 billion of stock in Lloyds TSB and Halifax Bank of Scotland.

This would leave three of the country's biggest lenders under quasi-state control. The British government now controls nearly £3 trillion in bank assets, and almost half the mortgage market, which will only suffer further losses as economic conditions continue to deteriorate. Yet already, the UK taxpayer is holding a paper loss of £2.3 billion in shares of RBS.

Job losses in the UK soared by 164,000 in the third quarter, the biggest surge in 17 years. Now at 1.79 million, or 5.7% of the workforce, unemployment is widely predicted to reach two million by December, possibly rising to three million by December 2010. So to try and cushion the blow, the Bank of England opened the monetary floodgates on Nov. 6th, unleashing a stunning 150-basis point rate cut to 3%, the lowest level in more than half a century, to rescue the badly shaken housing market.

Since then, it cut another 100 points to a record low of just 2.0%. Yet the first dramatic rate cuts – starting back in the summer – have since triggered a massive 25% devaluation of the British Pound vs. the US Dollar, and a 45% slide against the Japanese Yen. That should show up as a boon to UK multinational earnings, plus increased competitiveness in export markets.

However, factory activity in the UK plunged 15% in November, putting the Bank of England under heavy political pressure to slash interest rates by a whole one per cent on Dec. 4th. Manufacturing accounts for 14% of the British economy, and is suffering its longest streak of contraction since 1980. 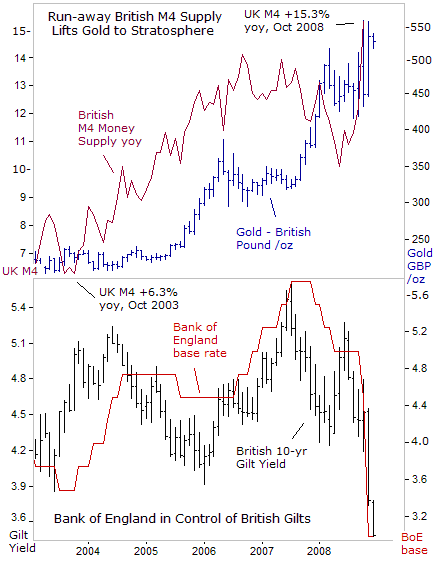 As early as Nov. 12th, BoE chief Mervyn King gave a stark warning of the difficulties that lie ahead for the UK economy.

"We are prepared when the world changes to make big changes to the bank rate in response. Consumer spending faltered in the third quarter under the weight of tighter credit and the squeeze on household budgets," he said.

Asked if interest rates could fall all the way to zero, Mr King said the BoE would set rates at "whatever level is necessary." And so in London, the two-year British gilt yield tumbled 24 basis points to 1.78% as traders bet the BoE would make good on its word, and slash its base lending rate further.

Central bank interest rates have never fallen below 2% since the Bank of England was founded in 1694. Most fascinating, however, is that long-term gilt yields are also plunging to record lows, even as the supply of British budget deficit is mounting to record highs.

The UK Exchequer will auction £146.4 billion of gilts this fiscal year, compared with £80 billion originally projected in the March Budget. The UK national debt is expected to zoom past £1 trillion by 2012, equal to 57% of gross domestic product.

Yet the BoE is in the driver's seat for now, with near total control over both short and long-term British interest rates. UK banks are hoarding the high-powered money that the BoE is pumping into the credit markets, or channeling the cash into safe haven gilts, amid fears of deflation and corporate defaults.

In this environment, the M4 money supply was skyrocketing at 15.3% annual rate of expansion in October. And as Baron Nathan Rothschild noted in the mid-19th century, "I care not what puppet is placed upon the throne of England to rule the Empire on which the sun never sets. 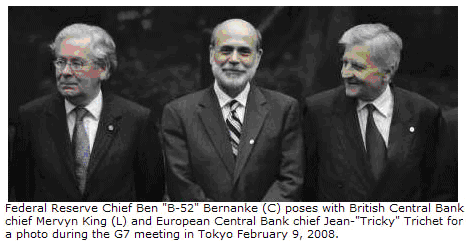 While the Bank of England gets busy monetizing whatever amount of debt the Exchequer needs to sell, British investors in Gold are the biggest winners to date, with the yellow metal soaring to £550 an ounce, up 130% from four years ago, in late November.

The explosive surge of the UK's M4 money supply, and the sharp devaluation of the British Pound against all major currencies, reminds us that:

"If you have to choose between trusting the natural stability of gold, and the honesty and intelligence of members of the government, with due respect for these gentlemen, I advise you, as long as the capitalist system lasts, to vote for Gold."
– George Bernard Shaw, 1928