END_OF_DOCUMENT_TOKEN_TO_BE_REPLACED

Comparing SDRs with the Dollar in gold, you can see what peeves the Chinese...

LAST WEEK, the head of the International Monetary Fund, Dominique Strauss-Kahn, suggested the global lending organization might be called upon to offer its 186-nation members an alternative to the US Dollar as a reserve currency, writes Brad Zigler at Hard Assets Investor.

In response to calls by China and Russia to supplant the greenback with special drawing rights – the IMF's internal accounting unit – Strauss-Kahn said:

"That day has not yet come. But I think it is intellectually healthy to explore these kinds of ideas now."

Special drawing rights were devised by the IMF in 1969 to replace Gold Bullion in large international transactions and to serve as a supplement to central bank reserve positions.

Though freely convertible in IMF transactions, SDRs aren't a currency. Instead, they're credits that a nation with a trade deficit can use to settle balance-of-payment debts. Since SDRs are ledger entries, their use eliminates the logistics of shipping Gold Bullion back and forth to settle national accounts. 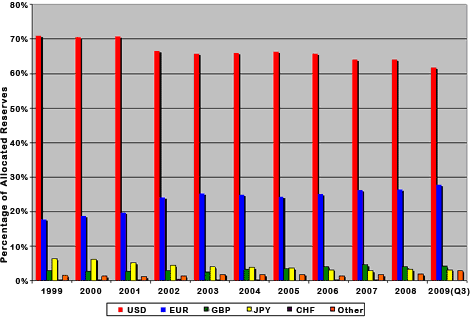 By value, SDRs represent a trade- and reserve-weighted basket of currencies, including the US Dollar, the Euro, the Japanese Yen and the Pound Sterling. The SDR basket's makeup is determined every five years by the IMF executive board and is due for its next revamp later this year. Currently, the SDR basket is weighted as:

The IMF recently increased the SDR float to 204.1 billion, now worth about $313.2 billion.

This year's reset of SDRs is bound to reflect ongoing shifts in central bank reserves positions. In particular, the IMF executive board will consider rejiggering the SDR to reflect a diminution in the Dollar's heft.

The US Dollar is the world's most widely held reserve currency, making up just under two-thirds (10-year weighted average: 65.2%) of central bank holdings worldwide. The currency's ubiquity, however, has been chipped away with increasing velocity over the past decade. As central banks have sought to diversify their reserve positions, Dollar concentrations have declined at an average annual rate of 92 basis points (0.92%) since 1999.

The primary beneficiary of world currency realignment has been the Euro, which now comprises a quarter (a weighted average of 25.3%) of global reserve allocations. Since the Euro's introduction in 1999, allocations have grown at a 99 basis point compound annual rate.

At a distant third is the British Pound Sterling (weighted average: 3.8% of allocated reserves), once the world's most heavily banked currency. Sterling allocations, though relatively small, have been growing along with the diversification trend. Central banks' holdings of British currency have grown an average 14 basis points a year.

Commitments to the Japanese yen, however, have taken a downward trajectory. With allocations averaging 3.7%, the Yen's reserve position has been falling at a 32 basis point annual rate.

One of the "intellectually healthy" notions for diversifying away from the greenback was floated last year by the governor of the People's Bank of China, who argued for enlarging the SDR basket to include more currencies and establishing a settlement system that would make SDRs tradable outside of the IMF's books.

Indeed, the trend among central banks is to hold increasingly large positions in currencies that the IMF currently buckets as "other". To be sure, some central bank holdings (weighted average: 18 basis points) are still maintained in Swiss Francs, but that position is shrinking by a basis point a year. Yet the "other" category is growing at virtually the same pace as the British Pound allocation, and now represents nearly 3% of global reserve commitments.

It's easy to see why the Chinese have an axe to grind. The People's Republic holds more than $2 trillion in Dollar assets accrued through years of Treasury purchases and exporting. The greenback's hegemony as a reserve currency makes it easier for the US to run high trade deficits, a consequence of debt-financed consumerism and a low savings rate. American budget deficits put Chinese Dollar-based investments at risk.

But using the current iteration of SDRs as a substitute for Dollars really wouldn't offer much risk reduction. Why? Reduce the SDR and the Dollar to Gold Bullion terms, and you'll see they're highly correlated with each other

For most of the five years since the last SDR reset, in fact, the IMF accounting unit was a virtual clone of the Dollar. Their rolling 30-day correlation (when priced in Gold Bullion) has averaged 98.6% since February 2005...as near to perfect as could possibly matter. 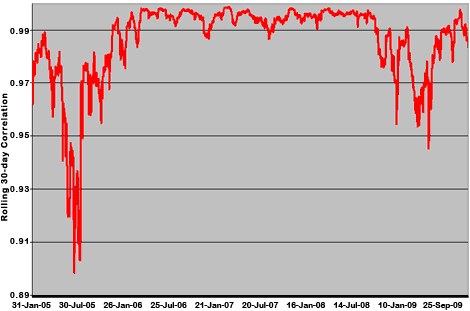 Clearly, a revision of the SDR basket is needed, but doing so raises new questions.

First of all, the Euro's correlation to SDRs, though lower than the Dollar's, isn't small. The currency's 30-day correlation to the IMF unit has averaged 93.4% over the past five years. Thus, pushing the Euro into a dominant position in the basket would run the risk of replacing one problem for another of virtually equal proportions.

One also has to consider the strains on the Euro as weaknesses in Irish and Greek economies threaten to scuttle the currency. So what about adding additional "other" currencies to the basket?

The truly representative choices are slim. The Chinese Yuan can't be used until it becomes freely convertible on the world's currency markets. And the Chinese currency's value is only gradually – very gradually – being unwound from the Dollar. Full convertibility isn't likely until trade barriers are lowered and access to Chinese markets is enhanced. That requires political change in Beijing, something not easily wrought.

Even if an optimal mix of other currencies could be found, attempting to float the SDR as a currency would introduce another set of risks and challenges. There's no banking infrastructure in place for trading SDRs. Getting SDRs into worldwide circulation among private parties and businesses would be a headache exponentially more painful than the launch of the Euro.

More important, the use of SDRs would require management by a "super" central bank, a potential insult to national sovereignty. The Euro failed to establish hegemony in Great Britain over this very issue a decade ago. The hue and cry in the United States over "giving away" reserves to the IMF or another entity would likely be even louder.

While the IMF might find it intellectually stimulating to consider a top-down approach to finding an alternative to the Dollar as a reserve currency, changes are much more likely to come incrementally and be market driven.

That is, unless we convene another meeting at Bretton Woods to decide a new global currency order.