END_OF_DOCUMENT_TOKEN_TO_BE_REPLACED

Why Gold Bullion is still a better bet than "Dr. Copper"...

COPPER is sometimes referred to as "Dr. Copper," because it is used in so many industrial applications. Copper is essential for many different sectors of the economy, from infrastructure to housing to consumer electronics. That usually makes its price action a good indicator of the state of the global economy, write Louis James and Andrey Dashkov of Casey Research.

The chart below illustrates the degree to which copper follows economic health – as opposed to gold, which is a traditionally a contra-cyclical commodity. Have a look. 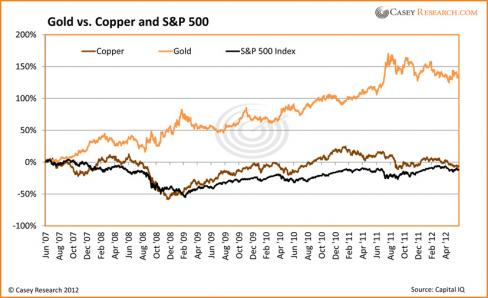 This illustration paints a convincing picture: over the past five years, copper (and the economy) stagnated, while gold was on a steady uptrend. No surprises here: gold has always been a reliable hedge against economic and financial turmoil.

China, responsible for about 40% of global copper demand, almost doubled its net imports, with a 99% annual growth rate in Q112. This does not mean, however, that the metal was used right away by industry: ICSG indicates that high import levels were accompanied by growing inventories in bonded warehouses.

This will lower demand in the near term. And it's not just China: other major sources of demand were largely stagnant in the first quarter, with the US growing by only 1%, European demand decreasing by 9%, and Japanese down by 6%.

Some analysts expect the European market to be "dead" for the rest of this year, due to the lack of trading volumes. Chinese demand is projected to soften, and its output of copper products is estimated to grow by 10-15% year-on-year. That may seem robust, but it was 18% last year, according to Beijing Antaike, a state-run metals research company. As with many official numbers coming out of China, we take these with a grain of salt, and thus expect output to be even lower than projected. 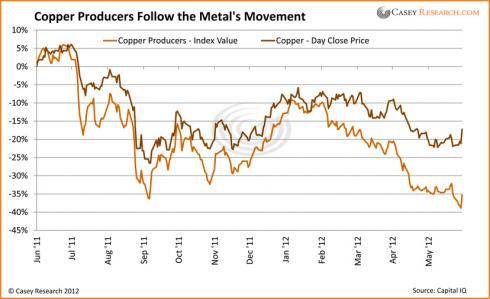 On average, the stocks of these copper companies have dropped about 35% since the end of June 2011. The stocks are more volatile than the metal itself, and in a weak economy that means rebounds are unlikely.

But are they still profitable? Yes, they are. Despite the global economic uncertainty and the volatility in the copper price, copper producers have had strong margins since Q310. 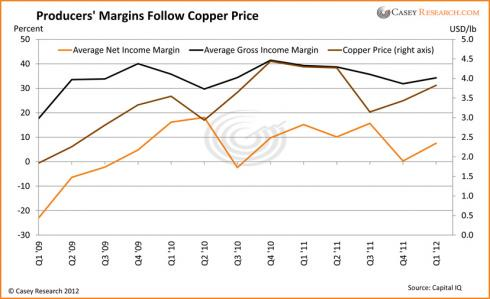 In the past three years, the net income margin of our 20 copper producers remained, for the most part, above zero. The chart shows the post-2008 growth very clearly, as well as the weakness in the second half of 2011. You can also see that the first quarter this year was a good one for copper producers, though again the results for Q2 may be disappointing due to economic uncertainties.

This pattern is exactly in line with our expectations, and it's the reason why we have not only stayed away from most copper plays the last few years, but other industrial metals as well. It's not that we only like gold and silver, but that our bearish near-term economic forecasts are bearish for Dr. Copper as well. So we've stayed away, even from well-run, profitable companies, opting instead to put them on our shopping list for when the economic situation looks so dire that they become good contrarian picks.

We are not there yet, so we still view the precious metals as the best bets for the foreseeable future.

Get the safest gold at the lowest possible price when you Buy Gold through BullionVault...