END_OF_DOCUMENT_TOKEN_TO_BE_REPLACED

UK gold holdings repatriated to Istanbul...
MADE YOU look, made you stare, laughs Adrian Ash at BullionVault.
But this shocker is true. Even though it isn't news. Not in reality.
Turkey's repatriation of gold bullion from the Bank of England in London has been in the public domain for 15 months already.
But for the gold bug-o-sphere of spare-bedroom pundits and coin shills?
Hold onto your hats, boys. Cos here's what we told readers of BullionVault's Weekly Update back in July, revised only where the numbers have changed. Which big picture for Turkey's reported gold reserves, they haven't, not since the middle of last year.
That might now change with the plunging Lira reaching terminal velocity. More on that to come in Part 2.
But first, people sometimes stumble so close to the truth, you worry they might break an ankle.
"Turkey is buying gold with a vengeance," said French investment magazine Capital one day this summer.
"The Bank of England's vaults are in danger of emptying," it then said in another story...
...warning that, because the High Court in London said the Bank of England was right to refuse $1bn of gold to Venezuela (a decision now queried by the Court of Appeal), other central banks may start "a wave of repatriation" in fear at such "shameless theft".
Well, maybe.
But such fears, if they do anything, may have already worked to pull one major central bank out of London storage almost entirely.
Turkey, in fact. Back in 2018. 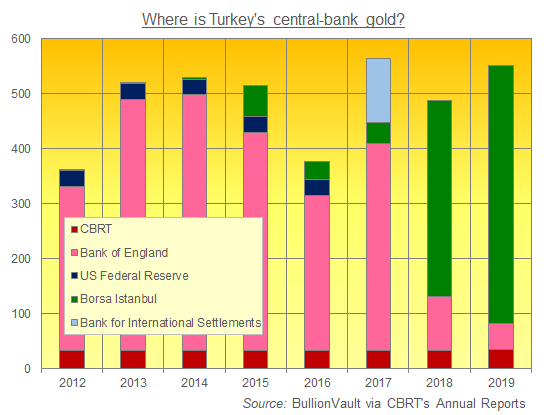 No one else seems to have noticed.
There's nothing on the bug-o-sphere or in the Turkish press that we can find.
We have meantime checked and re-checked the data...
...querying it with the Central Bank of the Republic of Turkey since spotting it last summer (to no avail)...
...and also fixing in our chart above what we think is a typo, mistaking the BIS for the BIST in the CBRT's latest annual report...
...where the BoE is now said to be holding less than 50 of Turkey's 550 tonnes (as of end-2019) if not 691 tonnes (as at end-September 2020).
That's only a little more than the CBRT is holding itself, with the vast bulk now in the commercial vaults listed as Borsa Istanbul (BIST, the local stock exchange) in the published reports from the CBRT (also known as TCMB thanks to its full title in Turkish).
Enough acronymns! What's the story exactly? 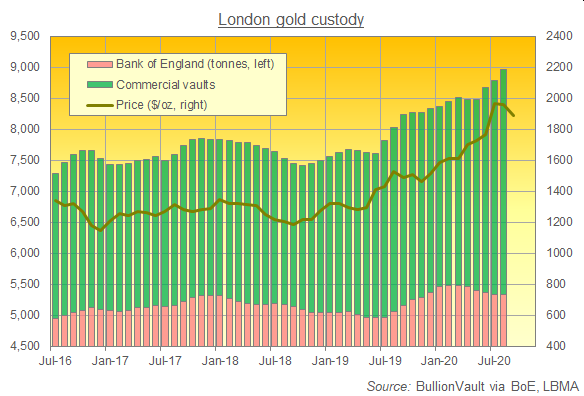 London is heart of the global gold market, home to the largest stockpiles, the busiest vaults, and the heaviest trading.
That's why – over 100 years since the UK's then gold-backed Pound began to lose its dominance as the world's No.1 currency – many other central banks continue to hold large chunks of their national gold reserves at the Bank of England.
Because if your gold is to have any value when you need it, you should keep it safely ready for sale.
Germany's Bundesbank, for instance, now keeps 50% of its massive gold reserves in foreign countries, holding some 1,220 tonnes at the New York Federal Reserve and another 440 tonnes or so at the Bank of England.
Liquidity matters. And while Germany's huge private investor gold buying made it the world's No.3 gold consumer nation overall during January-June's Covid Crash in jewelry shopping, it doesn't enjoy any depth or volume in large-bar gold. Which is the only gold that counts when you want the lowest costs, the safest vaults, and the very best price the very moment you choose to sell.
Lots of non-official sector traders also keep their gold in London, as shown by the green bars in our chart above. But note that the pink bars showing the BoE custody don't start at zero on the left hand axis. Because the green bars would look much smaller in comparison, and the strong correlation wouldn't be so plain between the total size of London holdings and the metal's London-market price.
For Germany's central bank, of course, gold is a political asset. Hence the reshuffling of 2013, aimed at appeasing the "Bring home our gold!" campaign and so maybe helping deflect criticism of the Eurozone's massive QE stimulus and looming negative interest-rate policy.
Germany is also on pretty good terms with both the United States and the UK (trade tariffs, Russian policy, and Brexit notwithstanding).
But contrast that with, say, Venezuela's elected dictator Nicolás Maduro today. Or Libya in the last days of Colonel Gaddafi a decade ago.
Like Maduro, the Mad Dog knew that his regime might struggle to realize the value of any assets it held overseas. So he pulled all his nation's gold back inside its borders, and then he used it to pay foreign mercenaries propping up his dictatorship as he ran out of Dollars and Euros.
Those soldiers of fortune wouldn't accept paper with Gaddafi's face printed on it. It would be worthless if, or rather when, the popular revolt hunted him down and shot him dead.
So back to Ankara. Why did Turkey pull all that gold out of London 2 years ago? And who might be next?
Background, analysis and guesswork follows in Part 2...