END_OF_DOCUMENT_TOKEN_TO_BE_REPLACED

Euro citizens lead, UK user buys £1m by smartphone...
GOLD TRADING jumped and net investment demand grew as prices rose once again in February, writes Adrian Ash at BullionVault, while the stock market tumbled amid the worsening global outbreak of novel coronavirus.
Total trading activity both online and by smartphone rose to its strongest since Donald Trump won the White House in November 2016, with the value of client bullion – stored and insured in each user's choice of London, New York, Singapore, Toronto or (most popular) Zurich – setting new all-time highs above £1.9bn.
Making gold cheaper, safer and easier since April 2005, and the largest provider of securely-stored bullion for private investors online since 2008, BullionVault added trading apps for Android and iPhone devices in 2012, enabling its users to buy or sell precious metals 24/7 from wherever they are.
Last month saw one UK investor use their smartphone to buy almost £1 million of gold in one order, a new record for BullionVault's market-leading mobile gold trading apps.
This new record purchase saw an Android user purchase just over 23 kilos of gold (747 Troy ounces) in the Zurich vault for a price of £949,967 (US$1.2m, €1.1m, ¥144m).
Commission charged on their purchase? Less than £1,022.
February's big app trade beat BullionVault's previous largest buy order by smartphone, again for Zurich gold, of €695,845 matched in June 2017. But it still came behind the record $1.4m gold sale of July 2019.
Now used by nearly 80,000 customers worldwide, the platform saw an average £7.4m of gold, silver and platinum traded each day (US$9.6m, €8.8m, ¥1.1bn) in the last week of February, up by 173.2% from the prior 52-week average.
With the MSCI World Index dropping 8.6% – its worst 1-month plunge since May 2012 – gold prices rose for a 3rd month running, up 1.6% to set new 7-year highs in US Dollar terms, up 1.7% to 40-year highs against the Japanese Yen, and rising 2.5% and 4.2% against the Euro and British Pound respectively to set fresh all-time records. 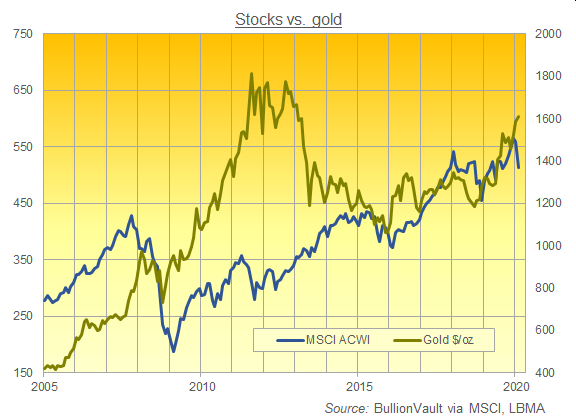 Despite February's new highs however, the number of private investors using BullionVault to buy gold across the month rose 15.7% from January, while the number of sellers slipped by 2.4%, snapping the more price-sensitive pattern seen at New Year.
Together that pushed the Gold Investor Index, a unique measure of private trading activity in physical bullion, up to 55.1 from the 6-month low of 53.5 seen in January.
The index would read 50.0 if the number of net buyers equalled the number of net sellers exactly. It peaked at 71.7 in September 2011, and fell to 49.1 last June.
So after January's profit-taking in gold, demand among private investors again rose alongside prices last month.
That extended the bullish pattern now developing since mid-2019's steep decline in global GDP growth forecasts.
The Covid-19 crisis is now driving more money into gold because, by bringing fears of recession forwards, it's directly hurting equities, higher-risk currencies and low-grade debt.
Gold's appeal as a store of value is also likely to keep broadening as central banks cut rates and expand QE asset purchases. Even aggressive monetary easing will struggle to offset the kind of quarantines and shutdowns we've seen in China, but they're sure to worsen the already negative real returns paid to cash savers.
February's count of first-time BullionVault traders worldwide beat the previous 60-month average by 32.9%, led yet again by Eurozone citizens now facing steeply negative bond yields in real terms, plus increasingly widespread negative interest rates on bank deposits.
The number of first-time BullionVault users living in the 19-nation currency union rose 87.1% last month from the 2015-2020 monthly average.
With silver prices meantime rising nearly 5% in February before tumbling to 6-month lows last week as the corona crisis crushed GDP forecasts worldwide, the number of people selling the metal rose to the most since August, up 10.0% from January's figure.
The number of silver buyers rose faster however, jumping 27.7% to also reach a 6-month high. Together that pulled the Silver Investor Index up to 54.7 from the reading of 52.6 given in January.
Silver demand was also positive by weight on BullionVault, with net inflows of 3.9 tonnes taking total client holdings up to 833.4 tonnes, the 9th new all-time record of the last 12 months.
Gold demand, net of client selling, totalled 85 kilograms across the month, reversing one-third of January's liquidation, when customers as a group took profits using BullionVault's live 24/7 marketplace.
That took client gold holdings – stored in each user's choice of London, New York, Singapore, Toronto or (most popular) Zurich – up to 39.1 tonnes, 0.4% below December's record high.
Together with an additional 70 kilos of platinum – of which BullionVault users ended February with a new record above 0.9 tonnes – that took the total value of client property to a new all-time high above $2.5bn (£1.9bn, €2.3bn, ¥271bn).
Attachments: