END_OF_DOCUMENT_TOKEN_TO_BE_REPLACED

AS A GROUP gold and silver stocks have certainly been a disaster over the past two years, writes Jordan Roy-Byrne for The Daily Gold.

Both GDX and GDXJ are down with GDXJ leading the spiral. Yet, the metals are actually higher. Gold is up quite a bit while silver is up marginally. Because of the volatility in this sector we can certainly choose any period to emphasize a point.

However, it is becoming clear that the mining equities are struggling to outperform the metals. In studying the history of this sector (both the stocks and the metals) I've learned two things that I will share with you today. First, the large-cap miners have no track record of consistently outperforming gold and second, it is possible to routinely find companies which can outperform the metals.

I credit the first point to Speculative Investor Steve Saville, who was one of the first to note that the miners do not consistently outperform the metals. In fact, in secular bull markets the stocks consistently underperform gold. Steve's chart below shows how the miners underperformed badly from 1974 to 1980. Recall that the gold price was fixed until 1971. Thus, both the uptrend from 1964-1968 and the downtrend from 1968-1971 are exaggerated.

It is simply a function of geology and numbers. Large companies have an extremely difficult time finding enough deposits and big enough deposits to not only replace reserves but to grow production. It's much easier for a company to grow from 50K oz Au production to 100K oz Au production than it is for a company to go from 2M oz Au production to 4M oz Au production. Throw in political risk, permitting delays, financing issues and execution issues and it's understandable why the large companies underperform the metal. This being said, it's important to take all those XAU vs. Gold charts with a grain of salt. Over the long-term, Gold will continue to outperform and that chart will continue to make new lows.

Moving along, it is important to examine the relative strength of various gold stocks in particular market cycles. Below we graph the HUI versus gold. We highlighted the performance during cyclical bull markets. In all three examples we notice that the biggest gains came at the start of the cyclical bull market. In the last two, the bull market ended as the HUI/gold ratio peaked slightly below its high for the cycle. This tells us that the stocks will strongly outperform at the start of the next cyclical bull but that outperformance will ultimately peak or fade. 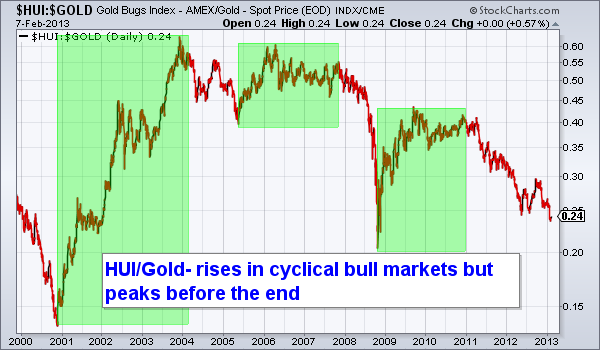 Next we move down the food chain. For subscribers I created a 20-stock index which contains roughly the 20 biggest producers outside of the HUI. As you can see the price action during this cyclical bear looks somewhat similar to the HUI. However, focus your attention on the next chart. 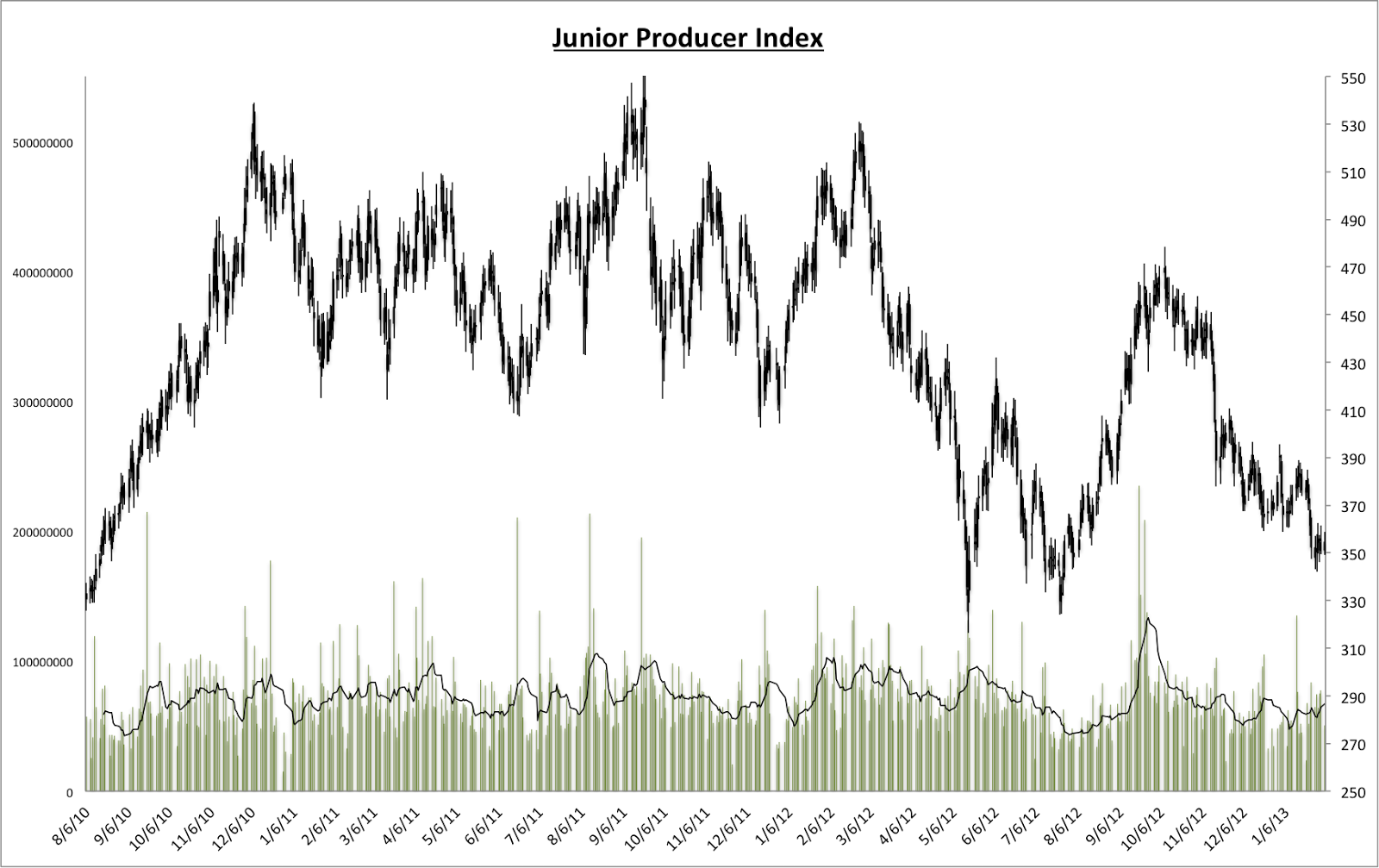 This chart is the ratio between the above 20-stock index and gold. The ratio bottomed in late October 2008 and peaked in early December 2010. The increase in this ratio coincided with the exact period of the cyclical bull market (if you count December 2010 as the end which I do). One could claim that the next problem is the above index underperformed even as gold was rising. That is true. Nothing is perfect. 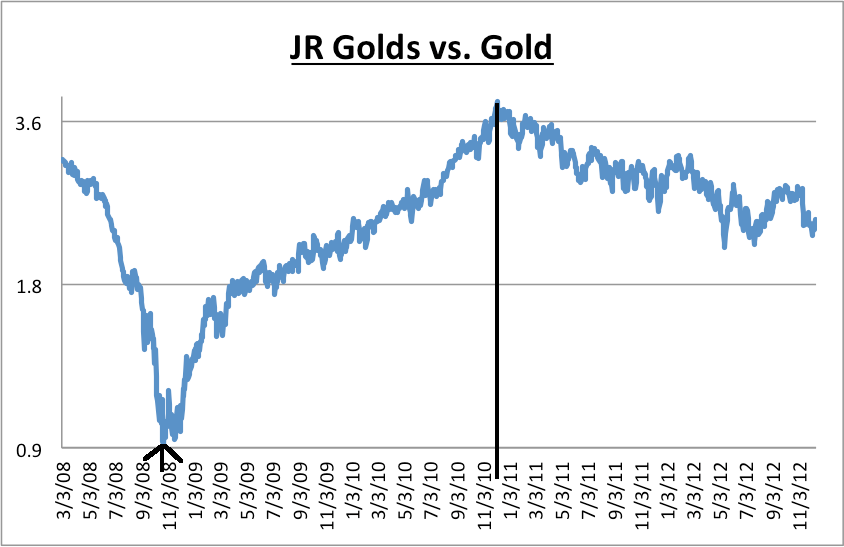 However, we took things a step further. I thought of 10 of my favorite growth-oriented producers (royalty companies included). Seven of the ten have been part of our model portfolio at one time or another. Below is the chart of an equal weighted index of the 10 stocks. It was up 4% in 2011 and 42% in 2012! 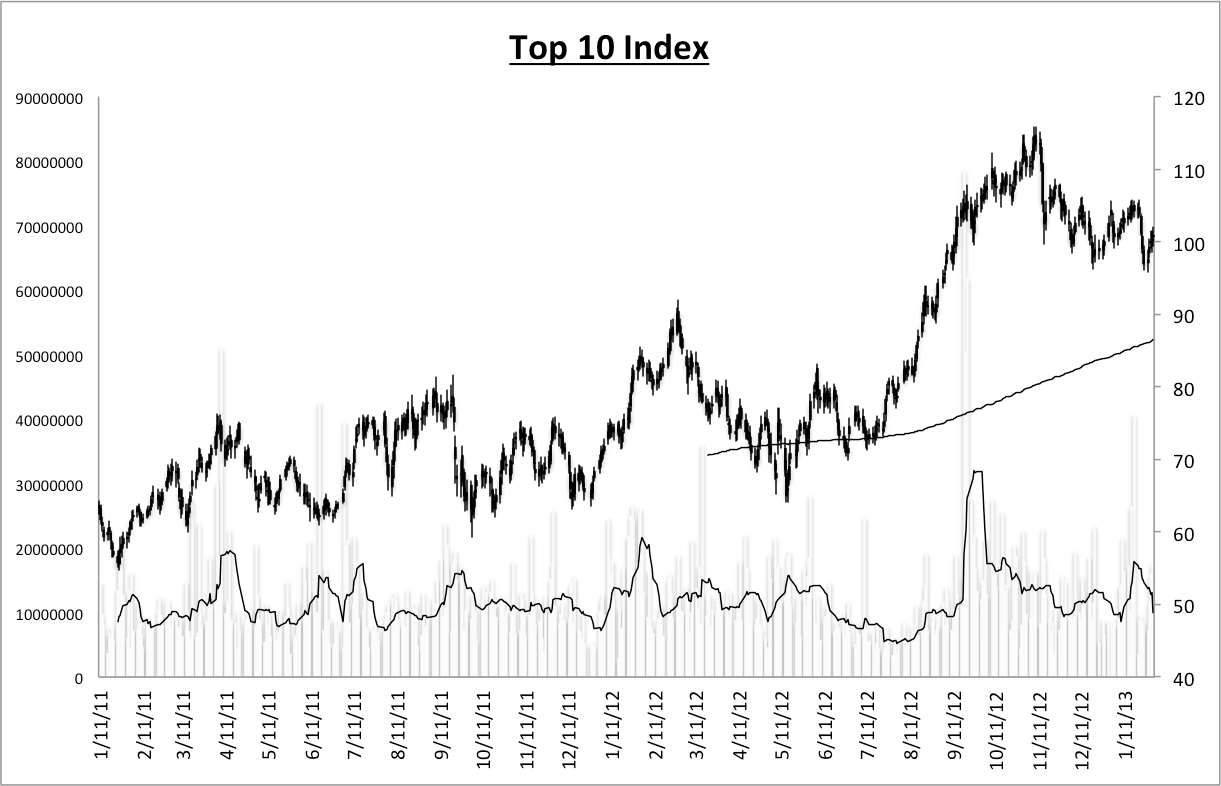 Here are my conclusions on this small study. The large cap miners will continue to underperform gold through the end of the bull market. However, they will outperform when the next cyclical bull begins and probably soon. However, they ultimately will underperform over the next five years.

During a cyclical bull market a large group of junior producers can outperform gold strongly. You only need to be able to pick the right large group. The better a stock picker one is, the more one can outperform. Clearly, if you are stock picking this sector you should never dabble in the large cap miners. If you want safety than go with bullion and try to find a mutual fund that has a track record of picking the right stocks. If you want to speculate than you need to train yourself to be an excellent stock picker or find someone who can help you learn.

Interestingly, I believe the near-term outlook is pretty good and most stocks have a chance to outperform the metals into the spring. The caveat is we need to see a final breakdown first. GDX, the HUI and my junior index above are all consolidating which could precede a breakdown and the final low. Over the past 10 sessions, GDX has been locked into a range of $41.50 to $43.00. A downside break, in your humble author's opinion could lead to the final bottom.