END_OF_DOCUMENT_TOKEN_TO_BE_REPLACED

As the PROPER macro fundamentals for gold mining grind into place, the real price of gold, as represented on the chart below by gold in relation to commodities, is constructive to have bottomed, writes Gary Tanashian in his Notes from the Rabbit Hole.

Because inflation expectations continue to fade with the Fed still in hawk mode, this should continue, in order to confirm a bottom.

A majority of gold bugs seem to think that gold stocks have utility against inflation, but they do not. Commodities, which are cyclical, and commodity related stocks have that utility. Gold stocks benefit from fading cyclical inflation as commodities such as mining cost input crude oil decline in relation to gold.

The Gold/CRB ratio (GLD/DBC shown here) is posturing for an attempt to break the downtrend that has been in place since the precious metals began their correction in mid-2020 amid a rampant cyclical inflationary backdrop. 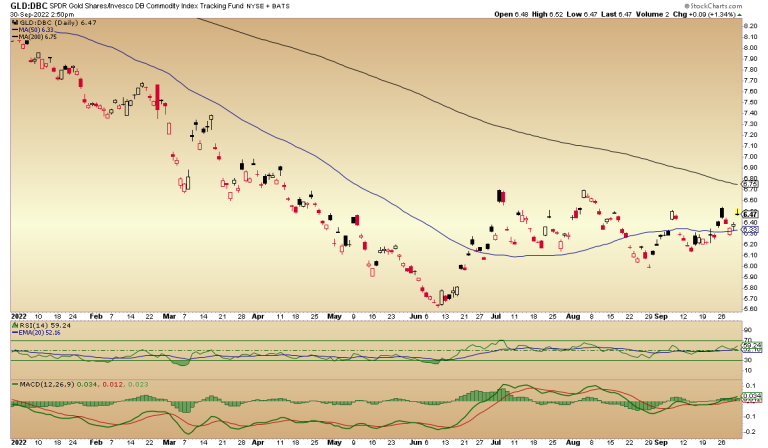 As broad stocks continue in a bear market and mainstream investors get a load of the implications of a chart like this (GLD/SPY, breaking bullish) interest will naturally flow to the miners. 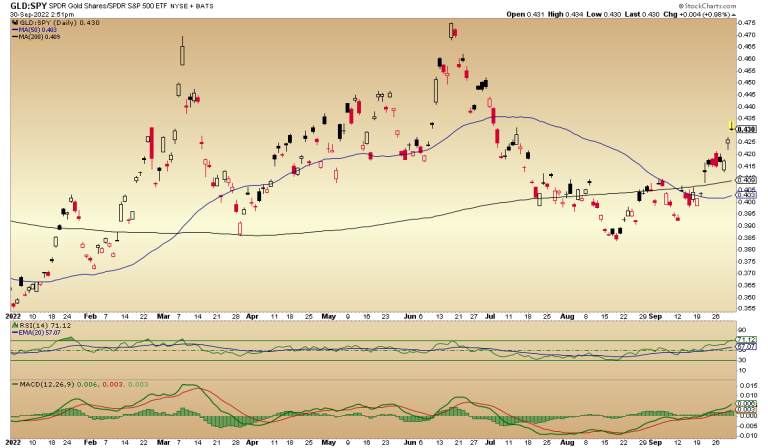 Also, HUI's recent out-performance to stocks will not hurt even one little bit in gaining a wider following.

The HUI/SPY ratio is breaking to a new high after carving out what is at least an interim low and more likely may turn out to have been THE low. 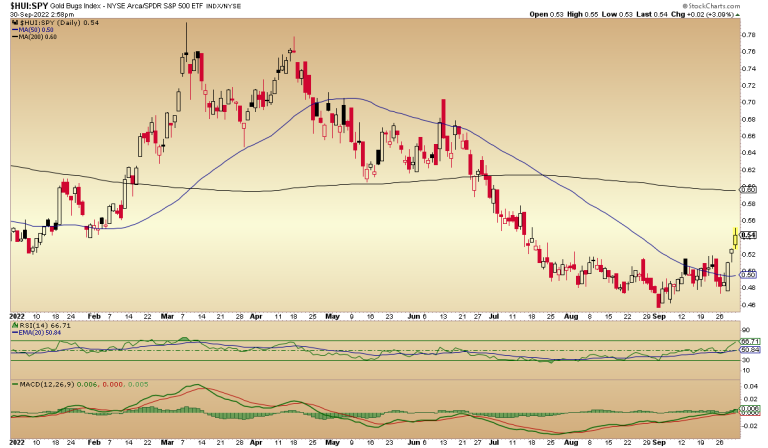 Frankly, my excitement is rising and due to risk/reward I am positioned in a couple of gold stocks. But there are several more on my buy list.

The nominal bottom for gold mining stocks may well be in, but that is not yet technically confirmed. However, I may add a bit even before confirmation due to the positive risk/reward carved out by improving fundamentals.

Gold stocks are a million miles lower than during the excess that blew out in 2020, and sentiment has been hammered in September.

But it cannot be stressed enough that the fundamentals need to continue to improve and the technicals need to marry that improvement in order to really get a bull going.

We (NFTRH) have done the hard work to be well intact to this point with respect to gold stocks (and broad stocks, for that matter) and the correction that is now in its third year. The above are just three pictures for consideration. But there are a whole lot more fundamental considerations and technical parameters in play that are being gauged methodically and without emotion (although I'll admit to a level of greed and anticipation I feel internally).

Frankly, I am hanging out there with a December 2021 post called 2022: The Golden Year that I'll have to answer for (which I will, publicly) if gold and the miners do not start to bull for real in 2022.

So I as much as anyone else want to see a real bottom confirmed. The NFTRH view has not been positive due to inflation, like most gold bugs view it. It has been negative for that reason. The inflation cycle from mid-2020 until this year has been corrosive to gold mining fundamentals, not positive.

Now that the macro is grinding counter-cyclical and away from inflation on an interim basis, we've been on alert for a real bull move. But it is important to have an answer to the question 'have enough inflation bugs been eliminated from the gold stock investor base yet?' because when the answer is yes – and the daily charts of the gold stock indexes and ETFs confirm it – boy is this going to be rewarding.

Risk/reward is and has been positive for some time now. We await some confirming technical signals by nominal charts and that is my, and by extension, NFTRH's primary focus at this time.