END_OF_DOCUMENT_TOKEN_TO_BE_REPLACED

US consumer prices were most stable under the Gold Standard...

SENATOR Ted Cruz has called for a return to the gold standard, writes Frank Holmes at fund managers US Global Investors.

Ever since the US left the gold standard for good in 1971, some politicians and investors have called for its return. At one of the Republican presidential debates in October, Texas Senator Ted Cruz became the latest, touting the stability and booming prosperity the US economy enjoyed in the years when the Dollar was pegged to the yellow metal.

In previous Frank Talks, I've highlighted some of the consequences of having a free-floating fiat currency, one of them being soaring national debt. When money is limited, as it is in a true gold standard system, so too is reckless government spending.

You can see how dramatically all debt in the US, both public and private, began to soar past economic growth once the gold standard was ended.

But my goal today isn't to argue for or against a gold standard. The system worked well in the second half of the 19th century, but economies have grown so large that there's no longer any way they could be sustained by such a limited commodity.

Even former Federal Reserve Chairman Alan Greenspan, who has consistently supported the idea that gold is money, agrees, telling the Gold Report in 2013: "A return to the gold standard in any form is nowhere on anybody's horizon."

So instead, I want to lay out the facts of America's past relationship with gold as a currency and dispel some of the misconceptions people might have.

1789
For the first 40 years of its existence, the US operates on a bimetallic system of gold and silver – officially, at least. Practically, silver coins are the favored currency, and domestic purchases made with gold are rare.

1834
Congress adjusts the silver-to-gold ratio, from 15-1 to 16-1. This makes gold cheaper relative to the world market price ratio. Silver begins to be exported, and by 1850, silver coins all but disappear in the US The yellow metal becomes the principal form of currency.

1862
The US abandons the gold standard briefly during the Civil War. For the first time, it issues fiat money with no convertibility into silver, gold or any other metal. In 1879, Congress freezes the amount of paper money in circulation at $347 million, where it remains for about a century.

A $1 "greenback" issued in 1862. It was the first time the US issued paper money unbacked by physical gold or silver.

1879
The US finally adopts a "classic" gold standard, one that proponents such as Senator Cruz wish to revive. In such a system, a standard mass of the yellow metal defines the value of a currency unit. Paper money, then, is not a separate good from gold and is fully convertible.

This system lasts until World War I. Although this period isn't free of financial crises, it's still widely considered to be one of the most economically stable in American history.

But let's not overstate this stability. The table below shows us that between 1879 and 1913, when the classic gold standard is in effect, the US actually experiences an average deflationary rate of -0.02 percent. At the same time, consumer prices have a standard deviation of only 1.98. Inflation never falls below -4.74 percent or rises above 4.53 percent. The other periods, by contrast, have huge swings in consumer prices. 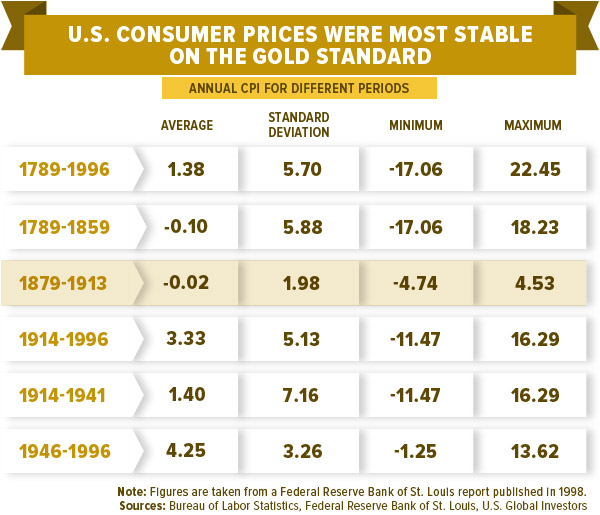 1900
Concerned that the US might be returning to a bimetallic system, Congress passes the Gold Standard Act, making the gold Dollar the official unit of currency. Greenbacks remain as legal tender but for the first time can be redeemed in gold.

In response to periodic banking panics when gold reserves fell short, the Federal Reserve is established as a lender of last resort. The Fed is not only charged with maintaining the gold standard but also starts issuing Federal Reserve notes that are 40 percent backed by the yellow metal.

1933
Four years after the Wall Street Crash of 1929, the Fed removes the US from the gold standard to expand monetary policy. Convertibility, therefore, is ended.

"The free circulation of gold coins is unnecessary," President Franklin Roosevelt tells Congress, insisting that the transfer of gold "is essential only for the payment of international trade balances."

Roosevelt nationalizes gold by issuing an executive order requiring all gold coins, bullion and certificates to be turned over to the Fed at $20.67 per ounce. Hoarding gold in coin or bullion is punishable by a fine of up to $10,000 and/or jail time. These policies are reinforced in the Gold Reserve Act of 1934.

Representatives from the US and 43 other countries meet in Bretton Woods, New Hampshire, to normalize commercial and financial relations. The agreement is a quasi-gold standard whereby each currency other than the US Dollar has a fixed parity to the Dollar, which itself is pegged to and can be exchanged for gold at $35 per ounce. (This does not apply to Americans, however, who still can't hold gold.) The Dollar becomes the world's reserve currency.

1971
President Richard Nixon "closes the gold window" after announcing the US would no longer convert Dollars into gold. This move is initially supposed to be temporary, but in 1976 the US monetary system officially becomes one purely of fiat money. Gold rises 2,330 percent during the decade, from $35 per ounce to $850.

1974
On December 31, President Gerald Ford permits private gold ownership again in the US.

For more on the gold standard, I want to direct you to a chapter in my book The Goldwatcher: Demystifying Gold Investing, written by its coauthor, John Katz. In the chapter, titled "The Rise and Fall of the Gold Standard", John asks whether the gold standard was to blame for the Crash of 1929 and, subsequently, the Great Depression.

No matter your opinion on the topic, it's a fascinating read.