END_OF_DOCUMENT_TOKEN_TO_BE_REPLACED

I think this is because, somewhere along the line, they decided, or were taught, that they were extremely difficult and confusing, so they just stick their fingers in their ears and go "gaaaaa" whenever the topic comes up. In other words, they don't even attempt to think about it.

There are some topics where this is a reasonable response. There is really not much chance that I would be able to meaningfully follow a discussion about aeronautic engineering, or whatever it is that makes wifi work, without years of background. I'm just satisfied that it works.

But the topic of money is actually not like that; and, since it doesn't work very well today, it is something that is worth figuring out.

In a gold standard system, gold is a "standard of value" – arguably, a pretty good one. It is "good" because it is stable enough that, when it is used as a standard of value, the economy is not troubled too excessively from the various distortions that take place when money changes value.

There is also a political aspect to it, which I am appreciating more these days. Because it is a standard that is not subject to human influence, it thus more easily becomes a standard that people can share. So, many countries can use it, and we get all the advantages of a shared standard of value. 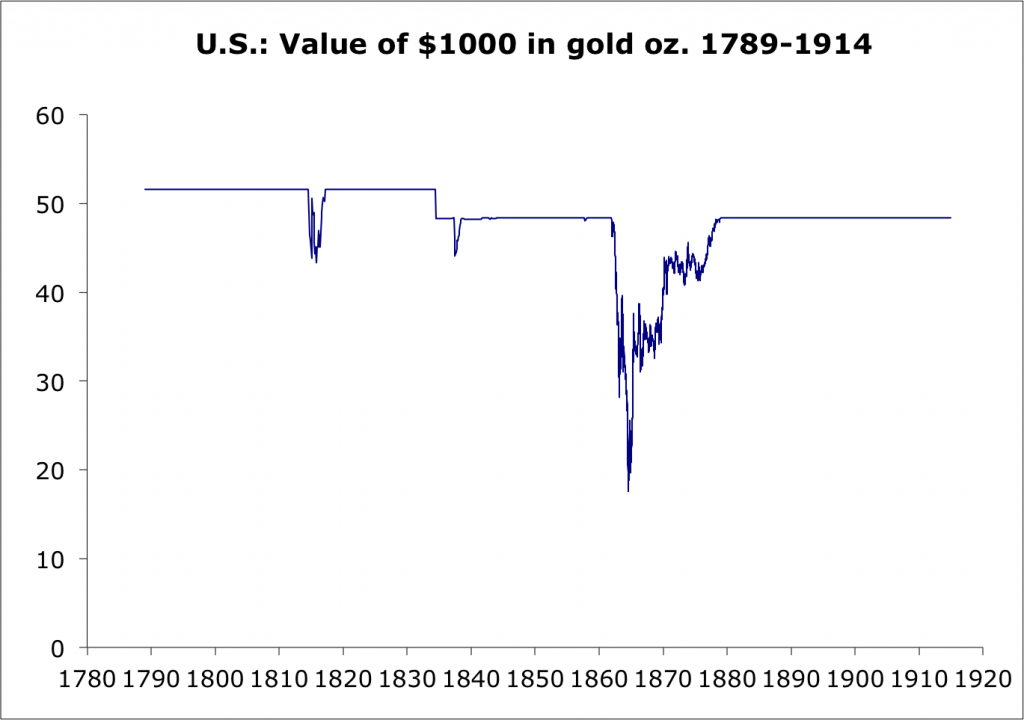 That is about it. The only major complaints about a gold standard system are:

These complaints have some responses:

Although gold may not be a "perfect" standard of value, we nevertheless have centuries of experience of countries using gold standard systems, and the results have been quite good.

Gold has been perfect enough. Also, nobody has come up with a better standard of value, one that is arguably "more stable" than gold, so in the end we don't have many choices here.

The "hard money paradigm" argues that an economy is best served by a currency that is stable, reliable, unchanging and free of human influence, somewhat like the meter or kilogram. The "soft money" paradigm argues that the economy is best served by economic bureaucrats who constantly manipulate the currency (in the process changing its value; a floating currency), along with interest rates and other related factors, to achieve a variety of favorable outcomes including managed interest rates; credit expansion or restraint; lower unemployment or avoidance of recession; trade relationships; and many other such things.

I would say that history has shown that the "hard money paradigm" is the winner – that it consistently produces better outcomes. The "soft money paradigm," despite all its alluring promises, tends to cause a lot of problems.

And, that is about it.

I think George Selgin's book Money Free and Unfree helps to disentangle many discussions related to central banks. Although Selgin's latest item is about whether a gold standard is a "free market" phenomenon or not, it also contains many observations that various issues regarding the "lender of last resort" function, or many intricacies between central banks and commercial banks, or regulation of commercial banks in general, don't really have much to do with the gold standard.

Spain in the 16th century had many, many problems (which I briefly described in The Magic Formula), but nevertheless the coinage was unchanged during that period. Britain in the 16th century during the reign of Elizabeth I had basically the same monetary policy as Spain (unchanged silver coinage), but was vastly more successful. I have argued that the problems of the Great Depression were essentially nonmonetary, at least until the devaluations of 1931 introduced a new monetary factor. By "nonmonetary" I mean, essentially, that the value of gold did not rise or fall (rise, presumably) to such a degree that it caused major problems. Gold remained an adequately stable standard of value during that time.

In the end, the argument for a gold standard boils down to:

Do you see how much easier this is than explaining how wifi works, or why one wifi protocol might be better than another? Yes, you can figure this out yourself. At some point, "normal" people – Congress, the President – are going to have to figure this out.

As for whether a gold standard is a "free market" alternative or not (Selgin's topic), I think that the ubiquity of the use of gold and silver, by all major civilizations throughout history back to Egypt in 3000 BC (a major topic of my book Gold: The Final Standard), indicates an outcome that cannot be the result of the dictates of government fiat. It basically reflects a process similar to Carl Menger's thought exercise about the "origin of money."