END_OF_DOCUMENT_TOKEN_TO_BE_REPLACED

It doesn't matter that central bankers don't want a Gold Standard...
THERE ISN'T a central bank in the world that wants to go back to a Gold Standard, writes lawyer, economist, investment banker and financial author James G.Rickards in The Daily Reckoning from Addison Wiggin's Agora Publishing.
But that's not the point. The point is whether they will have to.
I've had conversations with several of the Federal Reserve Bank presidents. When you ask them point-blank, "Is there a theoretical limit to the Fed's balance sheet?" they say no. They say there are policy reasons to make it higher or lower, but that there's no limit to the amount of money you can print.
That is completely wrong. That's what they say; that's how they think; and that's how they act. But in their heart of hearts, some people at the Fed know it's wrong. Luckily, people can vote with their feet.
I always tell people who say we're not on the Gold Standard that, in a way, we are. You can put yourself on a personal Gold Standard just by buying gold. In other words, if you think that the value of paper money will be in some jeopardy, or confidence in paper money may be lost, one way to protect yourself is by buying gold, and there's nothing stopping you.
The typical rejoinder is, "What's the point of owning gold? They're just going to confiscate it, like Roosevelt did in 1933?"
I find that extremely unlikely.
In 1933, we'd just come through four years of the Great Depression, and Roosevelt was new in office. People talk about the first hundred days, but he closed the banks right after he was sworn in. And he confiscated gold only a few weeks later.
And it wasn't as if Elliot Ness was going door to door, breaking into your house and taking gold. They wanted to get a small number of people who had 400-ounce gold bullion bars in bank vaults. And they got those people because they were able to close the banks and use them as intermediaries to confiscate that gold. But now, it's far more dispersed, and there's far less trust in government.
If the government tried to confiscate gold today, there would be various forms of resistance. The government knows this. So they wouldn't issue that order, because they know it couldn't be enforced, and it might cause various kinds of civil disobedience or pushback, etc.
As long as you can own gold, you can put yourself on your own Gold Standard by converting paper money to gold. I recommend you do that to some extent. Not all in, but I recommend having 10% of your investable assets in gold for the conservative investor, and maybe 20% for the aggressive investor – no more than that.
Those are pretty high allocations relative to what people have. Most people own no gold, and all the institutions combined have an allocation to gold of about 1.5%. So even if you take the low end of this range, you're still nowhere near 10%. In fact, institutions could not double their gold allocation even to 3%. There's not enough gold in the world – at current prices – to satisfy that demand. So it's got this huge upside associated with it.
Still, central banks don't want to go to a Gold Standard. But if gold is a barbarous relic, if gold has no role in the monetary system, if gold is a "stupid" investment, then why do the Chinese have 5,000 tonnes? Are they stupid?
If some scenarios play out, you are going to see the price of gold go up... a lot. And it may go up a lot in a very short period of time. It's not going to go up 10% per year for seven years and the price doubles. It's going to chug along sideways, maybe in an upward trend, with a lot of volatility. It will have a kind of a slow grind upward... and then a spike... and then another spike... and then a super-spike. The whole thing could happen in a matter of 90 days – six months at the most.
When that happens, you're going to have two Americas. You're going to have an America that was not prepared. Paper savings will be wiped out; 401(k)s will be devalued; pensions, insurance and annuities will be devalued through inflation... Because remember, it's not just the price of gold going up.
It's like putting a thermometer in a patient, getting a 104-degree temperature and blaming the thermometer. The thermometer's not to blame; it's just telling you what's going on. Likewise, the price of gold is not an economic object or aim in itself; it's a price signal. It tells you what's going on in the economy. And gold at the levels I'm talking about would mean that you've now verged into hyperinflation, or something close to it, because nothing happens in isolation.
At that point, you have to give more credence to gold. Now you've crossed the threshold. The minute you think of gold and paper money side by side, or having some relationship, you get to these price levels of $7,000-8,000 an ounce. They're not made up. They're not there to be provocative. They're actually the math. Those are the numbers you get when you simply divide the money supply by the amount of gold in the market. 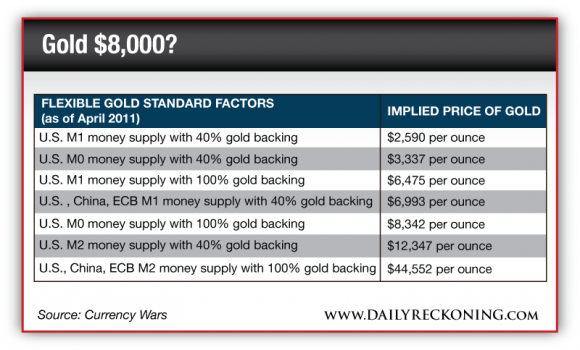 People are going to have to pay attention to that. And either the Chinese are dopes – which they're not – or people will start to get gold, which they will.
But if there's a run on paper currencies (which is entirely possible) and there's borderline hyperinflation (which is entirely possible), they may have to go to a Gold Standard... Not because they want to, but because they find it necessary to calm the markets.
I suggest you buy your gold at current levels – $1200, $1250 – and ride the wave up to these much higher levels ($4,000-5,000 an ounce) and then assess the situation. Be nimble. You can't just write a game plan today and follow it step by step. That's nonsense. You have to be nimble; you have to be following developments; you have to be prepared to change your mind based on new news.