END_OF_DOCUMENT_TOKEN_TO_BE_REPLACED

GOLD's ratio to silver prices hit all-time record highs Monday morning as the dearer, less industrially useful metal popped above 7-year highs at $1700 but the gray precious metal sank alongside world stock markets, bond yields and other commodities amid the worsening coronavirus panic, writes Atsuko Whitehouse at BullionVault.
After Asian stock markets sank 10% at Monday's opening, the Gold/Silver Ratio spiked above 100 – matching its record high of 25 February 1991 – as European equities also sank at the start of trade.
Share trading in New York was then suspended after the S&P500 index sank 7% inside 4 minutes, triggering a 15-minute 'level 1' halt.
Crude oil fell more steeply still, sinking 30% at one point from Friday's close after Russia failed to back fellow giant producer Saudi Arabia's call for a cut in world output to try and support prices in the face of collapsing demand.
Finding two-thirds of its demand from industrial uses, led by autocatalysts, platinum dropped 3.9% to slide closer to end-February's 6-month lows at $850 per ounce.
The price of silver – which finds nearly 60% of its annual demand from industrial uses – meantime declined 3.2% to sink below $17 per ounce, hitting its lowest Dollar value since August even as the US currency extended its fall on the FX market.
Priced in ounces of silver, one ounce of gold has averaged 58 across the last half-century, previously spiking higher during the early 1980s' and then 1990s' recessions, and topping below 84 during the global financial crisis and recession of 2008-2009. 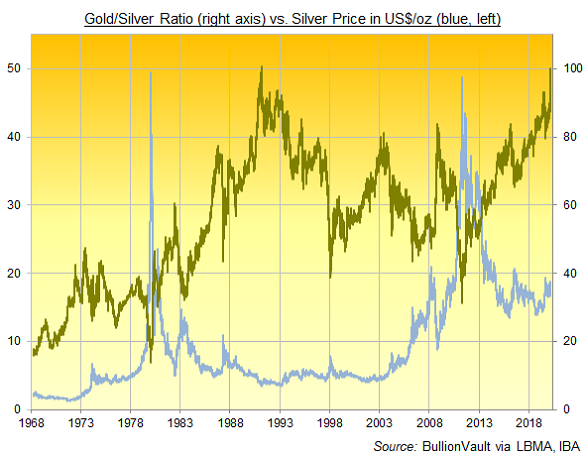 With investors rushing to park money in government debt, the yield offered by US Treasury bonds today fell below 1% across the entire curve, all the way out to 30-year maturities, for the very first time in history.
After slashing 50 basis points off overnight Dollar rates in last week's shock inter-meeting announcement, the Federal Reserve will cut the cost of borrowing by another 75 basis points at next week's March meeting, with a return to the record 0% low of the global financial crisis expected by the end of the year, according to the CME derivatives exchange's FedWatch tool.
Trade data from China – source of Covid-19 – on Saturday showed exports plummeting by 17.2% per year in the first two months of 2020 as the world's No.2 economy closed first for Lunar New Year and then kept factories and transport shut, imposing blanket 'stay at home' orders, to try and slow the spread of the novel virus from Wuhan in the central province of Hubei.
With imports down by 4%, that meant China posted a trade deficit overall, its first in 2 years.
Japan, the world's third-largest economy, today revised the GDP contraction for end-2019 – before its Asian neighbour was hit by Covid-19 – to 7.1% annualized, the biggest in more than five years.
The Japanese Yen, often seen as a safe-haven, surged 3% against the Dollar to reach 3-year highs, while Tokyo's benchmark Nikkei share index tumbled to 14-month lows.
Gold priced in the Dollar then fell hard from its new 7-year peak at $1700, retreating 2.6% before rallying to trade unchanged from Friday's finish at $1670 per ounce.
Gold for European investors slipped 0.1% overall as the single currency hit 13-month highs against the Dollar, thanks to traders seeing only limited scope for the 19-nation European Central Bank – already setting its key rate at minus 0.5% – to follow the US Fed in taking aggressive action despite Italy widening its quarantine zone to Lombardy, Germany banned any gathering of over 1,000 people, and 190 schools stayed shut in France.
The UK gold price in Pounds per ounce meantime edged lower by 0.6%, dropping back to £1270 after trying £1300 once again, as Sterling extended its surge against the Dollar to 5 cents since this time last week.