END_OF_DOCUMENT_TOKEN_TO_BE_REPLACED

Gold and silver were interchangeable as money for centuries...

FUNNY-MONEY promoters sometime like to dangle the idea that the "gold standard" in US or world history was a short-lived episode dating from about 1870 to 1914, writes Nathan Lewis of New World Economics in this post which originally appeared at Forbes.com – a period of only forty-four years.

I take a rather different viewpoint – that gold (and its adjunct, silver) was the primary basis of monetary affairs around the world for millennia, stretching up to 1971.

When we look at the history of monetary arrangements, we find that gold and silver were usually used together, in what I sometimes call the "gold/silver complex".

The reality was that silver and gold traded in a tight band with each other, a few percentage points around 15.5:1 (fifteen and a half ounces of silver was equivalent in value to one ounce of gold).

Thus, as a standard of value, both gold and silver were virtually identical, differing by only this slight drift. This stable value relationship made possible the bimetallic systems that were common in the 18th and 19th centuries, up until the 1870s.

Silver and gold were different metals, but in terms of a "standard of value" they were virtually identical for hundreds of years. Governments normally treated them as being effectively interchangeable, in a formal bimetallic system, as was used by the United States and most European countries.

It was only after silver's value decoupled from gold in the 1870s, for the first time in millennia, that governments had to make a choice of one or the other, because they could no longer be treated as interchangeable. 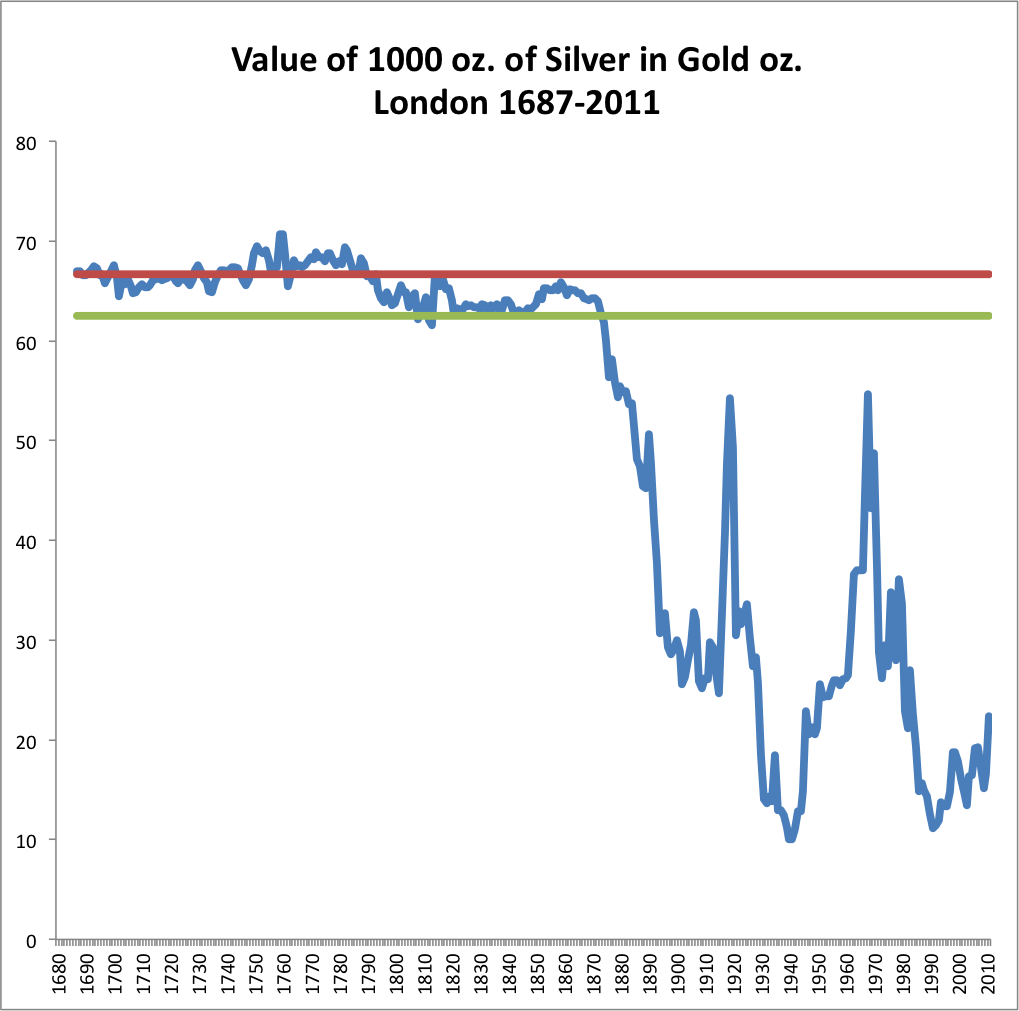 In practice, we find that societies before 1870 tended to drift between poles of the "gold/silver complex".

Sometimes they were overwhelmingly silver-centric, such as Britain between 800 AD and 1660, or China after 1450. Others were dominated by gold to the near-exclusion of silver, such as Byzantium (the continuation of the Roman Empire) from 350 to 1350, or Egypt during the Old Kingdom. Still others used both gold and silver regularly, but tended to focus on one or the other as a unit of account. Somewhere in the middle was formal bimetallism, where both gold and silver were recognized as being equivalent. In the fourth century BC, Athens was silver-centric, Persia was gold-centric, and Macedon had formal bimetallism. Britain was silver-centric before 1717, bimetallic with a gold bias after 1717, and used gold as the sole standard but with significant use of silver coins after 1816.

Many books have been filled with the details of these drifts between the two poles of the gold/silver complex. In the broader picture, however, these minutia are not really so relevant. Even if a country was focused almost entirely on silver, as China was before 1870, the value of the currency would be almost identical to the value of a currency that used a monometallic gold basis. Thus, in practical terms, a gold-only standard and a silver-only standard were not much different.

In the longer view, silver's value did drift in a broader range. For example, in 1500, the gold:silver ratio was about 1:10.7 in Europe. In 1700, it was 1:16 in Spain. The declining value of silver in Europe was due to the enormous output of the Spanish silver mines in Bolivia and Mexico. But even in this extreme case, this migration happened over the course of two centuries. What people actually experienced was a very slow drift, averaging 2% per decade.

Thus, in practical terms, gold and silver were largely interchangeable even then, similar to if the Euro/Dollar rate crept slowly from $1.40 to $1.428 over the course of ten years.

It dates back literally to Sumer, the first civilization of Mesopotamia, around 2400 BC. Sumerian accounting records of that time, preserved in cuneiform clay tablets, used silver as a universal unit of account. Ancient Egypt, however, loved gold: the historian Paul Johnson, in The Civilization of Ancient Egypt (1999), attributes the unification of Egypt by the southern kings in 3100 BC in part to the superior gold supplies of the Nubian region. The collapse of the New Kingdom, in the twelfth century BC, he attributes in part to the exhaustion of those Nubian mines, and the breakdown of the political alliances and military force that their gold output purchased over a period of centuries.

When Alexander the Great's armies pushed into northern India in 326 BC, they found people there using silver coinage just like back home in Macedonia. Gold and silver coinage were used continuously in India afterwards, much of it inspired by Greek and Roman examples. When the Spaniards set off to conquer the Aztec Empire, they found, in the great central market in Tenochtitlan (now Mexico City), that people bought and sold with bird feathers filled with gold dust, and standardized gold figurines. (Cacao beans – chocolate – served as small-denomination money.)

China's first gold coinage dates from the seventh century BC In the first century AD, the Chinese Han government held perhaps the largest store of gold in the world, which it used to purchase political alliance, receive and pay tribute, and finance military efforts. The first Roman coins were used in Thailand and the Mekong delta region as early as 270 BC; by the first century AD, the Funan kings were making their own silver coins. Before the first Chinese-inspired coins were minted in Japan in the eighth century AD, arrowheads, rice and gold dust served as money. By the ninth century AD, gold and silver coinage was used in Java and Bali, today's Indonesia, and also served as the unit of account.

When you fully appreciate the long relationship that humans have had with the gold/silver complex over literally thousands of years, the notion that the "gold standard era" was a brief and arbitrary experiment covering a few decades is completely absurd. Ultimately, it is a form of propaganda, that today's funny-money-loving academics try to foist upon people who don't know any better.

"A currency, to be perfect, should be absolutely invariable in value," David Ricardo wrote in 1816. The gold/silver complex was how humans achieved this ideal, in the practical world. By the late 19th century, this was resolved down to gold, and gold alone. The reason we don't have a gold standard system today is not because it doesn't work – people don't do things that "don't work" for four millennia – but because people have other goals for their currency.

They want the currency to be their primary tool of economic manipulation. The funny-money advocates hate gold, because it prevents them from doing so.

Gold's track record, as a standard of value, is awesome. But, for as long as people believe that manipulation of the economy via currency distortion is the royal road to prosperity, people will shun the idea of gold-based money. I think that today's funny-money arrangements will have a crisis before too long; a crisis painful enough that it might change people's minds.