END_OF_DOCUMENT_TOKEN_TO_BE_REPLACED

After nominating Stephen Moore and Herman Cain to the openings on the Federal Reserve Board of Governors, the next candidate being talked about is Judy Shelton.

Formerly of the Atlas Network Sound Money Project, she's now US Executive Director at the European Bank for Reconstruction and Development. Like her, both Moore and Cain have said many favorable things about gold standard systems in the past; but Shelton, an economist, writes and speaks about it regularly, including a lovely short book from 2011, Fixing the Dollar Now.

Naturally, as the author of three books about the gold standard, I am thrilled to see someone of her skills and background being proposed for a position that she very much deserves. (Shelton wrote some nice things for the back cover of my third.) The whole point of having a board of governors is to have some difference of insight and opinion. Certainly, it can't be such a bad thing if one person on the twelve-person Board actually thinks that the monetary principle that the United States adhered to for nearly two centuries, between 1789 and 1971 – in the process becoming the most successful country of that period – was not a mistake. 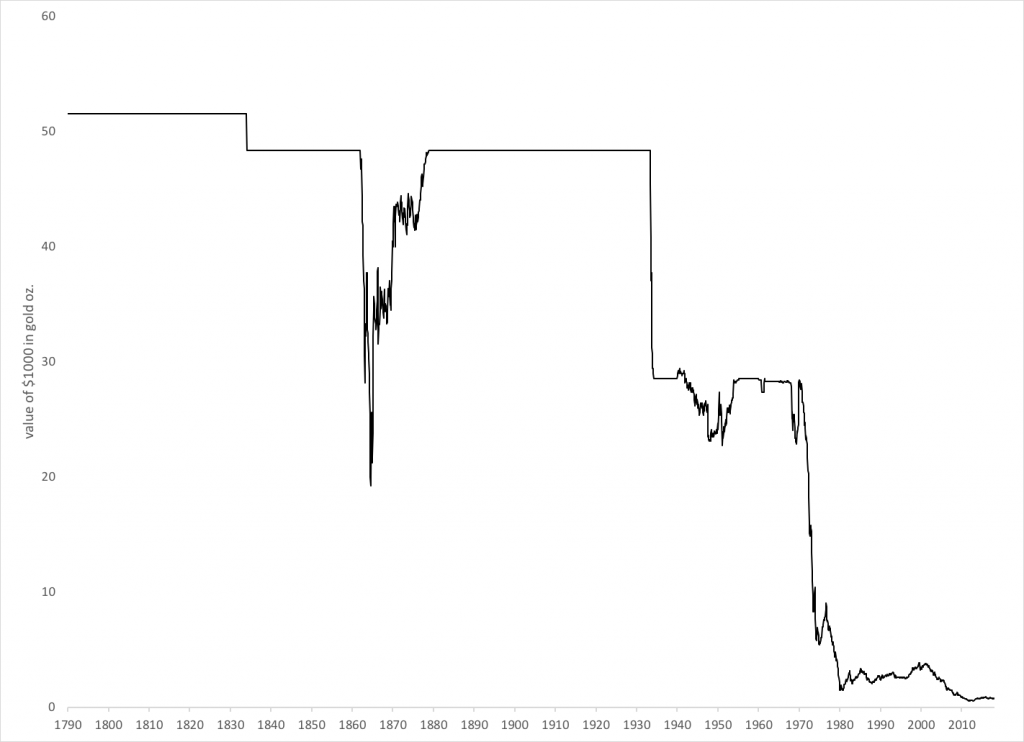 Unfortunately, the common dogma among academic economists today is that when you do the same thing over and over for 182 years, and the result is the broadest and most prosperous middle class in perhaps all of human history, that is obviously a mistake.

And when you leave that principle, in 1971, and engage in nearly five decades of economic manipulation via currency distortion; and end up with middle class stagnation unprecedented in US history, that is obviously not a mistake.

The tendency of academics in general, and academic economists in particular, toward dogma that can become dangerously unmoored from reality is well known to everyone who is not an academic. In a 2012 poll, 43% of economists that responded "disagreed" with the idea that a gold standard system would produce better outcomes than the present system, and 57% "strongly disagreed".

As you can imagine – especially since all of US history, and the history of the world (which I went into in a lot of detail in Gold: The Final Standard) contradicts their claims – a group of academics is probably not going to want one among their midst pointing out that maybe their Emperor wears no clothes. They are going to yell and scream about that.

But since all of our livelihoods are actually rather strongly affected by monetary policy, I suggest that is exactly what we want.

Actually, it appears that much of our currency history since 1971 (or really since 1982) has also been informally guided by the gold standard. (I give a few details about this in my most recent book The Magic Formula.) Paul Volcker, after formally abandoning the "monetarist experiment" in 1982, seems to have used both gold and a commodity basket as a rough guide (very rough!) to policy – encouraged in this direction by Arthur Laffer, also a gold standard advocate.

Volcker was actually at the August 1971 meeting at which President Nixon decided to end the Bretton Woods gold standard. At that meeting, Volcker said he preferred to keep the Dollar's link to gold at $35 per ounce More recently, in 2014, he said that he would favor something like a "new Bretton Woods". 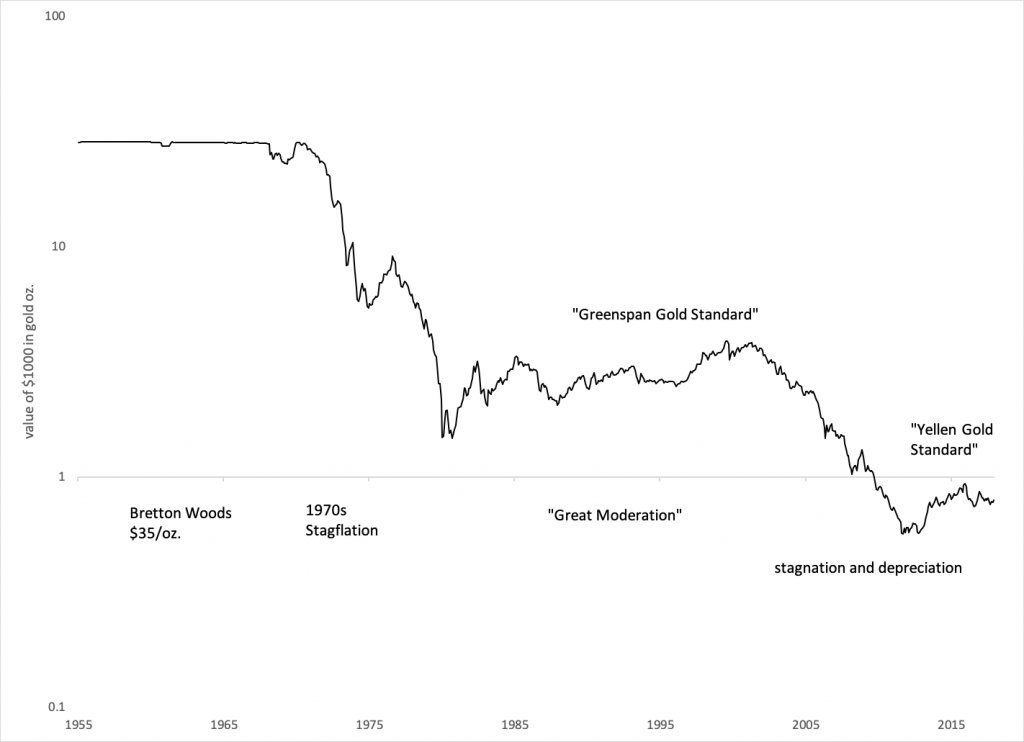 Volcker was followed by Alan Greenspan in 1987. Greenspan was, of course, a devotee of the gold standard in the 1960s. He later said that he was managing the Dollar to maintain its stability against gold during his tenure – which is exactly what happened, again with some swings both up and down. In 1997, as Chairman of the Federal Reserve, he told a Senate committee that he favored a return to a gold standard system. Then in 2017 he said:

He was helped in this by Wayne Angell, a member of the Board, who explicitly used a commodity basket target in formation of his opinions. In the early 1990s, Angell was invited to Russia as an economic policy consultant, where he recommended a gold standard system for Russia.

After a big decline in the value of the Dollar vs. gold in 2002-2011, we are now in the period of the "Yellen gold standard", where the Dollar's value has been rather pointedly stable vs. gold for about five years now. Nothing has been said about this in public, but Yellen did invite a group of prominent gold standard advocates (including Judy Shelton) to make presentations at the Federal Reserve in early 2015.

Since the end of the Bretton Woods gold standard in 1971, the Dollar's value has fallen to less than a thirtieth of its value in 1965, compared to gold. The only thing that has stopped this declining trend, it appears, is the direct influence of several gold standard advocates upon monetary policy during the Volcker, Greenspan and (apparently) Yellen years.

I know that a legion of academics can be mustered to claim that I am talking nonsense, which just goes to show how much attention they have been paying to real policy in the real world.

While we are waiting for people to come to their senses, we will have to rely on the efforts of people like Donald Trump, Mike Pence, Ben Carson, Herman Cain, Stephen Moore, Lawrence Kudlow, David Malpass and Judy Shelton to keep the monetary situation from getting too far out of hand, as it has in the past.