END_OF_DOCUMENT_TOKEN_TO_BE_REPLACED

Unfortunately, precious metals would soon reverse course and more. Gold ended September down nearly 3% and below $1300. Silver lost 5% and its breakout. 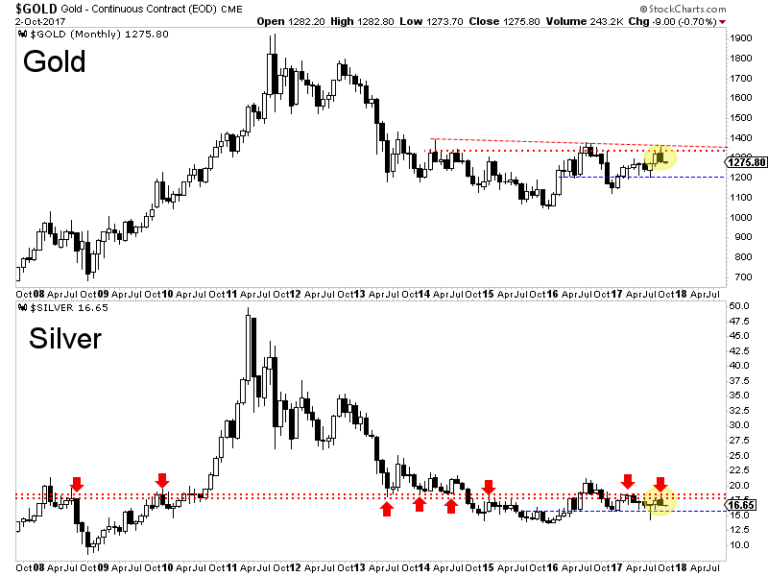 The gold mining indices (GDX, GDXJ, HUI) lost 7% to 8%. The monthly charts argue the major breakout from multi-year bottoming patterns will have to wait until 2018 at the soonest. 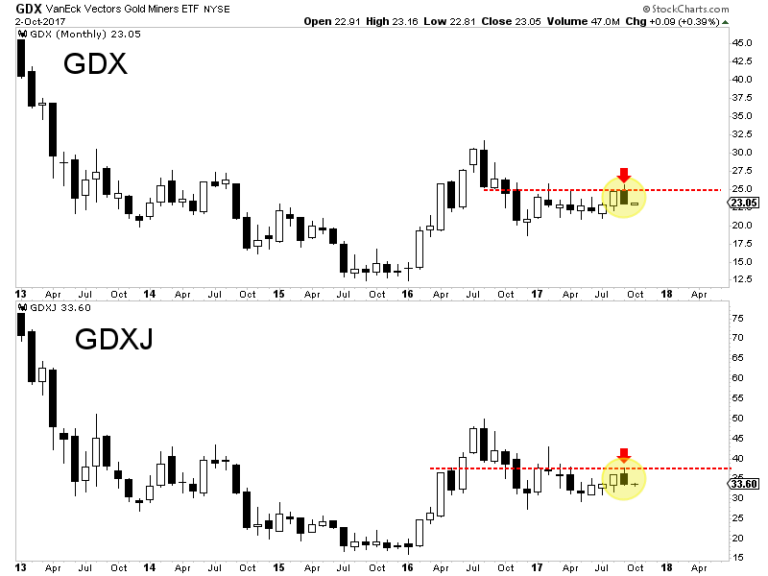 In addition, gold opened near $1330 (critical monthly and quarterly resistance), traded above it but then closed well below it.

While it is difficult to see, silver opened very close to key resistance at $17.80, traded up to $18.29 (near major monthly resistance) but closed the month well below $17.00. Silver failed in a resistance area that has been very important (note the arrows) for the past 10 years. Gold failed at a level that has been important since 2014.

The miners like the metals also failed at important resistance levels. The GDX fund of mining stocks opened September around resistance at $25, traded above it briefly but closed the month down at $23.

The junior-stock GDXJ ETF tested resistance at $37 but closed the month down at $33. The monthly candle charts below show the importance of GDX $25 and GDXJ $37. A monthly close above those levels could trigger a major leg higher. However, the monthly charts argue that scenario is not close at hand.

The monthly charts for gold, silver and the gold mining stocks show a failure at important resistance and that implies over the months ahead the precious metals sector will remain in its complex, multi-year bottoming pattern.

The negative technical outlook is not a surprise as the Federal Reserve is likely to tighten policy and the extremely oversold US Dollar begins a rebound. Simply put, precious metals are not yet ready for primetime. They could be waiting for a sustained rise in inflation or a serious equity market correction.