END_OF_DOCUMENT_TOKEN_TO_BE_REPLACED

AFTER talking about broader principles around how Russia can go to a gold Ruble for a while, let's see how things have been shaping up in Russia. writes Nathan Lewis on his NewWorldEconomics blog.

The Ruble has had a splendid rise vs. gold, actually exceeding the 5000 Rubles per gram goal expressed earlier. 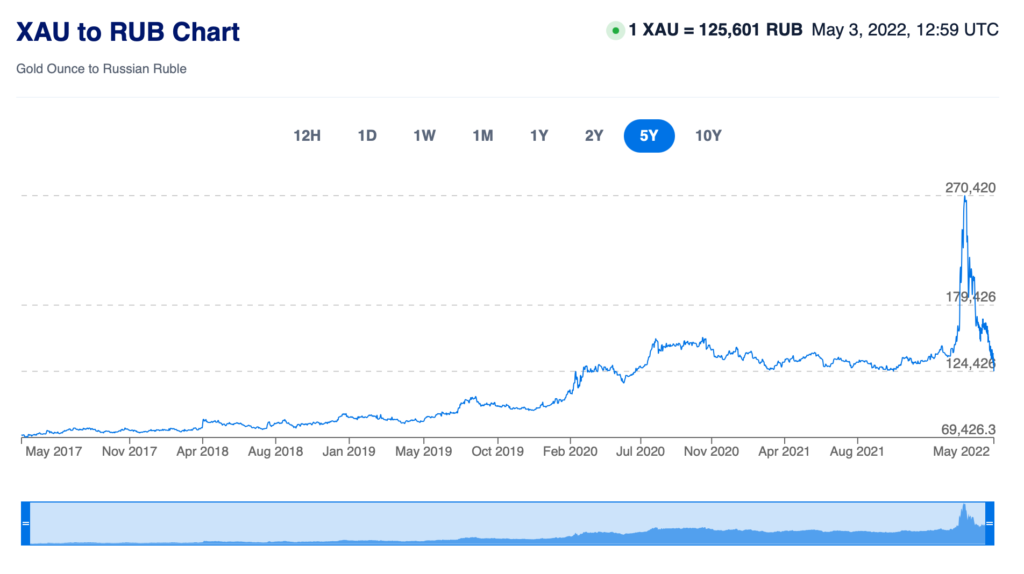 As you can see, there was a broad plateau around 130,000 Rubles per ounce. so maybe they are taking advantage of the recent situation to return to somewhere around that previous plateau. Also, as we can see, there isn't much of a close link for the Ruble to gold at 5000 per gram.

This has been accompanied by a few official developments.

"Russia is exploring whether to link the value of the rouble to gold and other commodities," said Bloomberg last week.

"The idea was raised publicly by Security Council Secretary Nikolai Patrushev in an interview with a state-run newspaper this week, Mr Peskov said, offering no further details.

"Unprecedented sanctions on Russia's central bank over the invasion of Ukraine deprived it of access to about half of its holdings, leaving it in possession of only gold and Yuan.

"Before the war, President Vladimir Putin repeatedly argued that Russia needs to cut dependence on the Dollar as a global reserve currency.

"Speaking with Rossiyskaya Gazeta, Mr Patrushev said experts are examining proposals to back the rouble's value with gold and other goods as part of an alternative system of finance that guarantees a measure of sovereignty and reduces the link to the Dollar."

This is vague talk, which is fine for now.

The important thing is that the Ruble maintain at least a rough stability versus gold. That also means that it shouldn't rise much above 4000 Rubles per gram, as tempting as it may be to see that rise as a sort of "success".

In March, as the Ruble was undergoing something of a disaster, there were some interesting developments regarding individuals' holdings of gold bullion in Russia.

Major banks in Russia reported a surge in demand for gold as Russians rushed to invest in bullion and coins to protect their savings, beginning \after Russia invaded Ukraine in the last week of February.

Russia's central bank even announced that – after restarting its official gold purchases after a two-year hiatus at the start of March – it was halting official gold purchases from local banks, because "Currently, households' demand for buying physical gold in bars has increased, driven, in particular, by the abolition of value-added tax on these operations."

Russia's President Putin also signed a law scrapping the 20% value-added tax on metals purchases on March 9, reports Kitco. This is meant to encourage buying of precious metals over foreign currencies when the Ruble is collapsing.

"Precious metals are a traditional defensive asset that helps to feel confident in any economic situation. At the moment, our clients want to receive a physical guarantee of the safety of their savings, and bullion is an excellent tool for this," Russian media cited Sberbank's director of the 'Borrow and Save' division Sergei Shirokov as saying.

There are two interesting items here. The first is the abolition of VAT taxes on precious metals. It would be good to extend this to all taxes, including such things as capital gains taxes. It appears that gold is subject to the same capital gains taxation as all other assets and property, which is the top 13% flat tax rate.

While I would like to see all capital gains taxes in Russia eliminated (the "VAT base" recommended by US Flat Tax enthusiasts since the 1980s), this is particularly important for gold, if it is to serve as an alternative medium of transaction. Many US States have taken similar measures, eliminating taxes on precious metals, although this has been somewhat ineffective since Federal taxes remain.

The second is the existence, and increasing popularity, of "ETF-type accounts" based on gold. I am not sure exactly what is referred to when Sberbank says its products "backed by precious metals" have grown to 315 trillion Rubles and VTB Bank reports that its ETF-type accounts are now at 87 trillion Rubles. I would guess it is not a security traded on the Moscow Stock Exchange, and held in a brokerage account, but perhaps more in the nature of a "gold savings account" or basically a 100%-reserve "unallocated" bullion account (as ETFs are supposed to be operated).

It is a relatively easy step to go from a "gold savings account" much like a regular Ruble savings account at a bank, to a "gold checking account" in which payment can be made from one account to another account held by another person, at the same bank or, eventually, between banks. These can remain 100% reserve accounts isolated from the rest of banks' balance sheets. It would be another small step to add a smartphone app making these "gold checking account" transactions very easy, similar to PayPal, Venmo, or China's AliPay. This would also be similar to the original conception for GoldMoney. Probably, these transfers ("payments") could be denominated in grams and milligrams, with a bank clearinghouse eventually established to enable bank-to-bank payments settled in physical gold bullion.

This would establish, in Russia, a sort of "parallel currency based on gold," although entirely in digital form – basically, as a checking account and a smartphone app linked to that account. I talked about this in my Congressional Testimony on the topic in 2012.

Along with this, I would encourage the production of a gold coin based on grams – for example a ten-gram "Russian gold sovereign coin," minted by the government. It should not have a "denomination" in Rubles, but simply be a ten-gram coin. It would be similar to the British "sovereign" coin of the nineteenth century, which had about 7.32 grams of pure gold, alloyed with 8.3% copper for hardness. These days, I think it would be good to issue these larger coins in plastic cases, which would prevent coin wear.

These days, I think it would be good to issue these larger coins in plastic cases, which would prevent coin wear. This is actually a major problem, which we don't have much experience with today. With only a little wear, let's say 1% or 2% of weight – which may come about intentionally via "clipping" or "sweating" – coins are no longer easily fungible.

The existence of a nice, high quality gold coin like this would allow banks to make payments (such as physical withdrawals from these "gold savings/checking accounts") in a small-denomination unit, and also allow direct payment by transfer of gold coins. For larger amounts, 100g and 1000g ingots (the kilobar now standard in Asia) can be used, up to 10kg which is pretty close to the weight of the standard 400oz London Good Delivery bar (12.44 kg).

This would help make gold coins a regular part of peoples' daily experience, and cement the idea that money is gold and gold is money. It is, perhaps, more psychological than anything (using a gold-based version of AliPay is a lot more convenient), but psychology is important.

This would be not much different than the gold coin that Russian president Dmitriy Medvedev presented at the G8 meeting in 2009. This had about a half-ounce of gold, or about 16 grams.

Medvedev, an "Atlantic Integrationist", was proposing a "new international currency" following along with the goals of the Globalist New World Order crowd. A Russian solution today would be more like a sovereign domestic currency that takes on an international character, as the gold-based British Pound and US Dollar did in the past.

One way this can come about is by maintaining a buy/sell at the parity value, for example 5000 Rubles per gram of gold. When the Rubles value is low, perhaps at 5100 Rubles per gram, then the Central Bank, offering to sell gold at 5000 per gram, becomes the cheapest seller. As it sells gold, base money is reduced by an equivalent amount, and the monetary base shrinks. When the Ruble's value is high, perhaps at 4900 per gram, then the central banks becomes the highest bidder, offering to buy gold at 5000 per gram. As the central bank buys gold, the base money supply expands by the equivalent amount. This is how all USD or EUR-based currency boards work today.

Interest rates are mostly irrelevant. In the past, they were part of the process used to modulate central bank lending ("discount lending") to domestic banks.

The monetary base "narrow definition" (this seems to exclude all bank reserves except "required reserves," or in other words, it is almost all currency in circulation) has been contracting nicely back to a pre-crisis level.

Deposits of banks at the CBR, the other major component of Base Money, has also been coming down. Thus, total base money has been contracting, and it is no surprise to see that the Ruble has been soaring in response. See, it works! Just like in 2009.

Also, yields on domestic government bonds have been coming way down, now with huge inversion of the yield curve. Just like I promised: Good currency management leads to lower yields, not higher. "Higher interest rates" is not the solution to a weak currency. The solution (base money contraction) produces lower interest rates, not higher. Again, just like in 2009.

All in all, pretty good stuff from the central bank. The rapid recovery of the Ruble is no fluke.

Just as happened in 2009, the Central Bank may soon have to buy assets – such as buying gold at 5000 or perhaps 4500 Rubles per gram – to keep the Ruble from going higher!