END_OF_DOCUMENT_TOKEN_TO_BE_REPLACED

THE PULLBACK in Gold Prices a year ago no doubt shook out a lot of nervous buyers. They got in on the rise, they got nervous on the pull back. They sold, and they lost, writes Jeff Clark, editor of Big Gold at Casey Research.

But it's a shame, because when we look logically at gold's historical performance – for example over the last 12 years – we see that holding their nerve, tough though it can be, will most likely turn out to be the best approach, and for good reason.

Look at Gold Prices for the last five years. 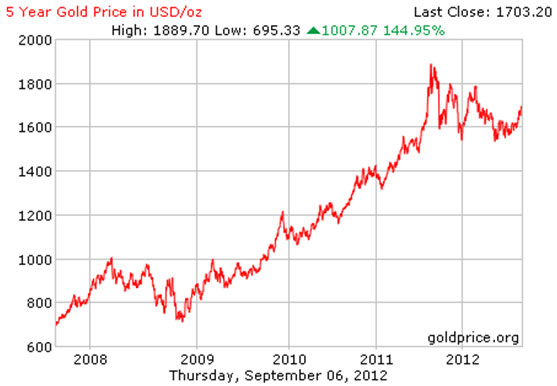 You can see, despite the pullback, that the trend is clearly heading up.

But to get a feel for when the current pullback will end and to understand what we can expect when it does, consider these three key reasons you should be considering gold in your portfolio mix:

1. Gold is an inflation hedge.

Our economy has been flooded with paper money and national debt has skyrocketed.

At the same time, the Dollar is being actively devalued in order to repay that debt.

To you and me, it means that sooner or later inflation – real inflation – will hit us hard. It's just a matter of when, not if.

Historically, gold has been the number-one way to protect yourself from inflationary times.

If we are heading toward a period of high inflation, as it seems clear we are, then gold should play its part in protecting you when it arrives.

As we come out of the summer and straight into elections, the chance of any big plan for reducing pressure on the Dollar is slight. Problems caused by negative interest rates, debasement from bailouts, debts, and money printing are all pushing the Dollar lower.

Yet gold has risen against the Dollar, Euro, Swiss franc, Canadian Dollar, and British Pound every year since 2000. The following list shows gold's rise from then, priced in US Dollars (gains listed are year over year).

Those numbers show a solid, unbroken, and global bull market.

3. The US Dollar has inflation baked in the cake (and so do many other currencies).

Because the Fed continues to pour money into the economy, it's difficult to say for certain when gold will make a dramatic move. But when inflation hits home and people start to question the value of paper currency, then people will turn to history's premier safe haven – gold.

Getting your timing right is tricky. If you buy today, gold may still go down. You could hold off buying and watch the price take off. The important thing to realize, though, is that the overall trend is clearly upward.

Currency dilution is a key factor, and signs –including growing expectations for another round of economic "stimulus" from the Fed soon – tell us that it is coming. When headlines about gold start showing up on the evening news, it will be too late. By then, of course, prices will be moving fast, so logically, the time to get in is now.

There are three ways to invest in gold: Owning physical gold; owning "paper gold"; and finally – where the life-changing profits can come from – owning the right gold stocks.

Getting your strategy right, and doing it sooner rather than later, is the key.

One physical gold outright – and get the lowest possible price – when you Buy Gold through BullionVault...