END_OF_DOCUMENT_TOKEN_TO_BE_REPLACED

GOLD PRICES rose near $1950 per ounce in London trade Friday, losing 4.1% from last week's record finish as bullion-backed ETFs snapped a record 20-week expansion, world stock markets slipped, and bond yields retreated from yesterday's 7-week high.
Ten-year US Treasury yields edged backed to 0.70% per annum as the start of New York trading approached, up from last week's record-low of 0.52%, hit as gold prices surged to their current all-time high of $2075.
"China's gold price discount reached another historical high on Wednesday," says consultancy GFMS Refinitiv, trading "around $110/oz cheaper than overseas benchmark.
"Ironically, demand from the jewelry industry has actually picked up in recent days to take advantage of the price weakness."
Typically showing a premium above the global benchmark of London bullion settlement, domestic Chinese gold prices this week averaged a discount of $71 per ounce – a new record suggesting weak demand versus supply in the metal's No.1 mining, consumer and importing nation. 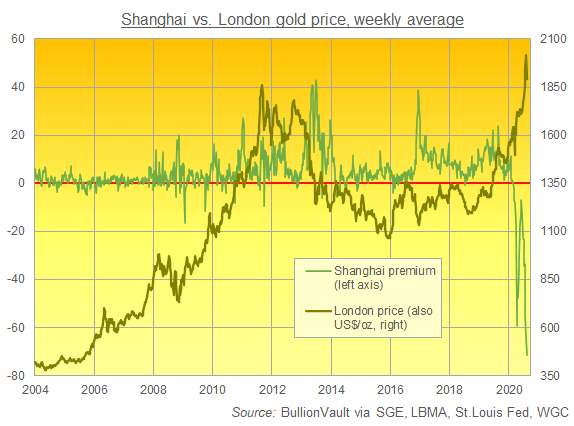 Households in No.2 gold consumer market are also "on the sidelines" reports Bloomberg, despite this week's retreat in prices.
"Consumers had only started coming to the stores in the last 10 days," says N.Anantha Padmanaban, chair of the the All India Gem and Jewellery Domestic Council.
"Now with a correction like this, they may take their time waiting for further fall."
India's central bank this week raised the maximum loan-to-value limit for commercial banks lending money against gold collateral, a booming industry increasingly led by non-bank finance corporations that had already swollen to $45 billion before the Covid Catastrophe struck.
The Reserve Bank's hike in banking-sector LTVs on gold-backed loans from 75% to 90% – made "to further mitigate the economic impact of the Covid-19 pandemic on households, entrepreneurs and small businesses" – comes on top of the metal's dramatic price rise in Rupee terms, up more than 2/5th so far in 2020 to fresh record highs above INR 55,000 per 10 grams.
"Lenders are unlikely to sanction beyond 80% of the value of the gold," says LiveMint, quoting senior banking executives' caution over cutting their safety margin on new gold loans amid the metal's surge to new all-time high prices.
But 65% of India's gold loans are made by informal lenders, outside the regulated sector, reckons accounting consultancy KPMG, and the Association of Gold Loan Companies has asked the Reserve Bank to raise its members' LTV cap, still at 75%.
Gold-backed investment funds traded on the stock market have meantime seen a small outflow of investor cash since last weekend, snapping 20 consecutive weeks of expansion for market leader the SPDR Gold product (NYSE: GLD).
Against the GLD's 10-tonne outflow – taking its total holdings back down to 1,252 tonnes from last week's new 7-year high – cheaper competitor the iShares Gold Trust (NYSEArca: IAU) has expanded by 2 tonnes to a new record above 500 tonnes.
Headline-grabbing hedge fund Bridgewater Associates b ought shares in both the GLD and IAU in the 3 months to end-June, new regulatory filings show.
That growth in Bridgewater's exposure, plus the price rise in gold-backed ETFs, took the value of its position to more than $1 billion – over 1/6th of the fund's total 13F reportable assets.
"I think it is highly likely," wrote the fund's boss, Ray Dalio, in July 2019, "that sometime in the next few years central banks will run out of stimulant to boost the markets and the economy...and there will be an enormous amount of debt and non-debt liabilities (eg, pension and healthcare) that will increasingly be coming due [but] won't be able to be funded."
To survive this 'paradigm shift', Dalio said "it would be both risk-reducing and return-enhancing to consider adding gold to one's portfolio."
Gold-mining No.1 Barrick (NYSE: GOLD) this week reported a 15% drop in its April-June output by weight, but reported a 155% rise in earnings per share with all-in sustaining costs across its global portfolio rising to $1031 per ounce.
Australian junior Wiluna Mining (ASX: WMX) today said it has hedged over A$110 million (US$78m) of the next 12 months' output, locking in near-record AUD prices in a deal with privately-owned Swiss trading house Mercuria worth over 85% of the firm's current stock-market capitalization.
Silver meantime outperformed gold prices again on Friday, recovering most of this week's earlier drop to trade at $26.90 per ounce – a new 7-year high when reached last Wednesday.
The iShares Silver ETF (NYSEArca: SLV) yesterday saw a record 1-day increase in size, needing an extra 217 tonnes (1.2%) to reach above 18,000 tonnes of backing, the most ever, with a 15th consecutive weekly gain.