END_OF_DOCUMENT_TOKEN_TO_BE_REPLACED

Sharp corrections in the gold price typically lead to sharp rises...
AS OF LAST FRIDAY, writes Jeff Clark at Casey Research, the Dollar gold price had fallen as much 35.4% from its peak London PM Fix prices of 96 weeks earlier.
But if you're like us, you still recognize that the core reasons for investing in gold haven't changed. People who sold their gold recently made a shortsighted decision. Before too long precious metals will rebound – and probably in a big way.
But when? Does history have any clues about how long we'll have to wait for that rebound? Perhaps the most constructive way to forecast a turnaround in gold is to look at how its price behaved in prior big corrections.
Here's an updated view of the three largest corrections in the gold price since 2001, along with the time it took the price to return to the old high and stay above that level. 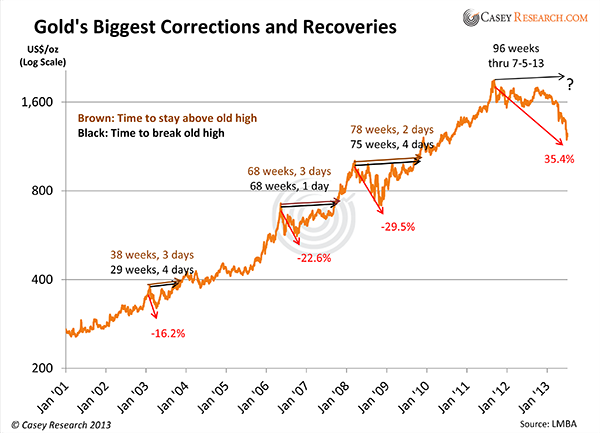 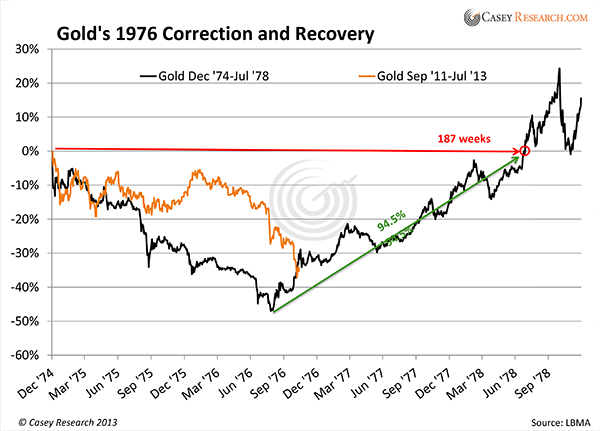 As you can see, during the big correction of the 1970s, gold declined 47% and took 187 weeks to recapture old highs. This fits in with the pattern discussed above: the bigger the correction, the lengthier the recovery. Another interesting pattern: the time to reach new highs always equals or exceeds the duration of the decline.
While the current correction hasn't been as deep as that of the mid-'70s, the decline is already longer, and it's the most prolonged of the current cycle. It is thus reasonable to expect gold to take two years or more to regain the $1,900 level and continue beyond. Barring a black swan event, gold will likely log its first annual loss since 2000 this year. These are not predictions, just possibilities, and a reminder that if gold is slow to recover, it's simply adhering to past patterns.
However, it's not all bad news, as the chart shows: gold nearly doubled in the two years from its '76 low to its '78 return to former highs. The message here is obvious: add to your inventory at depressed levels. And don't worry about missing the bottom; investors who waited to buy until gold had retraced 30% of its decline still netted about a 70% gain once it returned to prior highs.
The same patterns hold true with stocks. You can see the high-to-low-to-prior-high time frame was longer, but the gains were bigger once the dust settled. 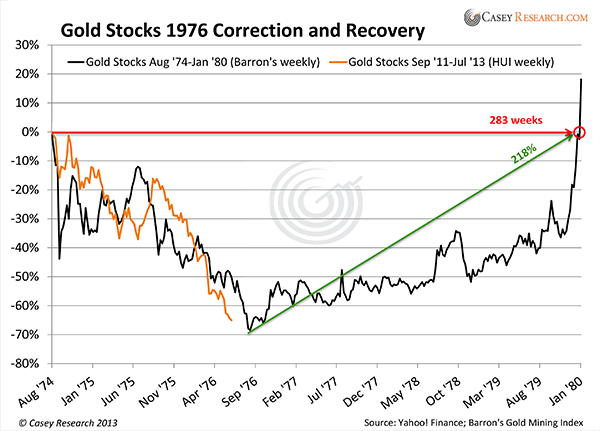 Investors who bucked the conventional wisdom of the day and bought a basket of gold and silver producers in the autumn of 1976 – after they had dropped by almost 70% – more than tripled their investment. We're now approaching the degree of selloff that was seen then, setting up a similar opportunity to profit.
Don't let the long recovery times shown in the charts deter you. Stay focused on the pattern; once the declines reversed, the general trend was up. Contrarians and forward-thinking investors need to prepare for that reality, rather than take umbrage with how long it might take to beat old highs. By the time mainstream analysts – who know little about gold in the first place – declare it has entered a "new" bull market, the lows will be long behind us, along with the best buying opportunities.
Once gold bottomed at $103.50 on August 25, 1976, the trend reversed and the metal rose a whopping 721% to peak at $850 on January 21, 1980.
Silver's climb was even more dramatic. From its 1976 low of $4.08, it soared 1,101%. This is the 10-bagger grail of investing, where investors had the chance to add a zero to their initial investments.
But remember: the process was multiyear and began after a dismal two-year decline that was punctuated with sharp selloffs, similar to gold's behavior since its 2011 high. While that's a stupendous return within a short time frame, the biggest gains were seen in the final five months. The patience of some investors would certainly have been tested in those first three years.
Here's a look at the gains for the metals from their respective lows.

Both gold and silver logged double-digit returns every year after the bottom of these price corrections (except silver the first year). Once the momentum had shifted, buying and holding while the fundamental forces played out led to huge profits. No "trading" was necessary; just buy after a big correction and hold on for the ride.
No need to attempt to time the bottom, either; those who bought a year after the lows still reaped gains of 490% for gold and 996% for silver. The largest chunk of profits came in the second year and beyond.
Also of note is that the second leg up in precious metals was bigger than the first. There's no reason to think we won't experience the same thing this time around.
The messages from history are self-evident: