END_OF_DOCUMENT_TOKEN_TO_BE_REPLACED

It's IMPORTANT to understand gold's fundamentals as it will help us confirm a new bull market, writes Jordan Roy-Byrne at TheDailyGold.

To this point, gold's rallies have failed to make higher highs and higher lows because, although there has been improvement in fundamentals, the fundamentals have not turned bullish yet.

The technical trigger will be gold and gold stock outperformance of the stock market which will likely precede the fundamental catalyst of Fed rate cuts. The start of rate cuts will indicate declining real interest rates which is the key driver of bull markets in gold.

With that said, here are some things that do not impact the price of gold.

Geopolitics
This was borne out of the 1970s because geopolitical developments then did impact gold. They affected oil prices which impacts inflation. Random geopolitical events have no immediate impact on gold unless they directly impact the fundamentals. Unless an event has immediate and sustained consequences for energy prices, it should be ignored and deemed short-term noise.

Central Bank Buying
This sounds impressive and important. Central banks are powerful entities who help manage economies. Surely, they know something? According to Bloomberg, central banks are buying gold at the fastest clip in almost 50 years!

The truth is central banks don't have any inside information and their buying or selling cannot be used for market timing purposes. This chart from Murenbeeld & Co. shows that the 2001-2011 run began with record central bank selling. 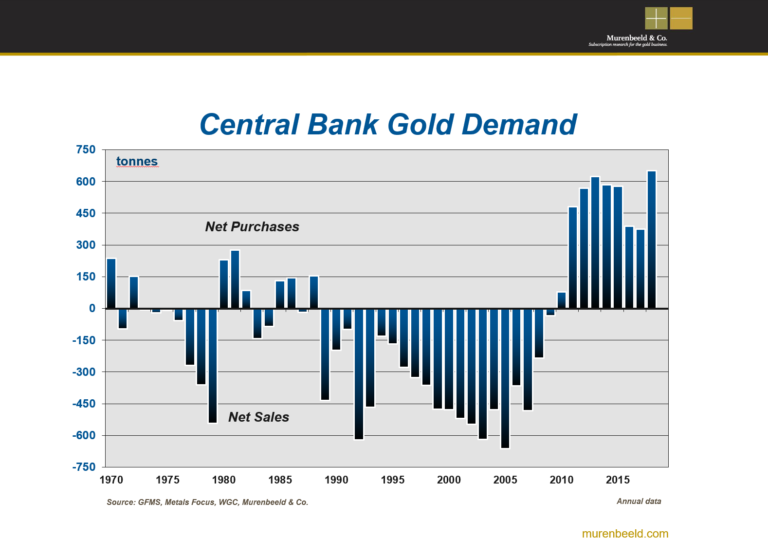 Central banks have been consistent buyers since the 2011 peak. If anything at all, the information is a contrary indicator.

Supply & Demand
Gold is not like the other commodities. It acts far more like a currency as its drivers are inflation, interest rates and the US Dollar.

The price of gold doesn't respond to changes in supply and demand. The chart below from Nick Laird shows that demand actually surged in the 1980s and 1990s, creating a rising deficit throughout the late 1980s and entire 1990s. But that was a time when the price trended sideways to lower. 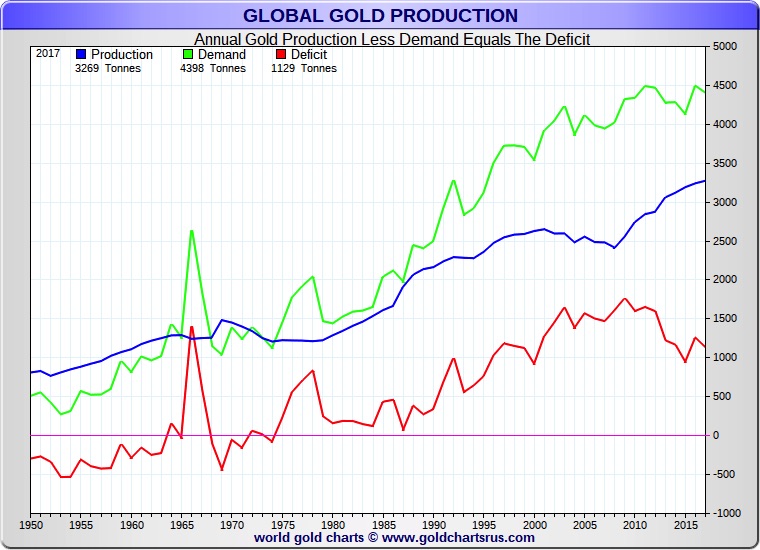 Part of the reason for that is jewelry demand is the largest component of gold demand and it trends inversely to the gold price.

It's also important to note, gold isn't consumed like other commodities. Its supply grows in perpetuity. This is another reason its not impacted by supply and demand.

It's also another reason why "Peak Gold" (where annual output begins a slow, permanent decline) – if true – will not impact the gold price.

Other factors such as geopolitics, jewelry demand, central bank buying, Peak Gold and physical demand (which, if you read most gold bugs is always red hot) don't impact the primary trend in the gold price.

While Peak Gold or production difficulties do not affect the gold price, they are hugely bullish for the companies that are making high margin discoveries or adding value to high margin deposits.

Capital is flowing to the companies that are making these discoveries regardless of the trend in metals prices. When gold fundamentals turn bullish, that is when massive amounts of capital will flow into juniors, creating a historic bull market.