END_OF_DOCUMENT_TOKEN_TO_BE_REPLACED

Fear in stocks shines a light on gold...

LAST WEEK's volatile stock selloff is exhibit A for why I frequently recommend a 10% weighting in gold, with 5% in bullion and jewelry, the other 5% in high-quality gold stocks, mutual funds and ETFs, writes Frank Holmes at US Global Investors.

What began after the positive wage growth report extended with all major averages dipping into negative territory for the year. The Dow Jones Industrial Average saw its steepest intraday point drop in history, losing nearly 1,600 points at its low on Monday 5 February, while the CBOE Volatility Index, widely known as the "fear index", spiked almost 100% to hit its highest point ever recorded.

Gold bullion and a number of gold stocks, however, did precisely as expected, holding up well against the rout and helping savvy investors ward off even more catastrophic losses.

The research backs up my 10% weighting recommendation. The following chart, courtesy of BCA Research, shows that gold has historically outperformed other assets in times of geopolitical crisis and recession. Granted, the selloff was not triggered specifically by geopolitics or recessionary fears, but it's an effective reminder of the low to negative correlation between gold and other assets such as equities, cash and Treasuries. 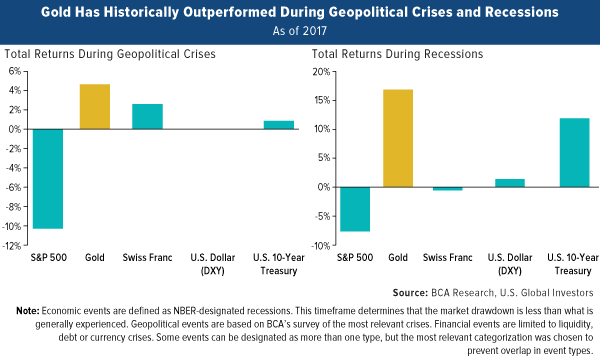 "We expect gold will provide a good hedge against a likely equity downturn, as the bull market turns into a bear market" in the second half of 2019, BCA analysts write in their February 1 report.

The reemergence of volatility and fear raises the question of whether we could find ourselves in a bear market much sooner than that.

So how did we get here, and what can we expect in the days and weeks to come?

It's important to point out that the US economy is strong right now, so the selloff likely had little to do with concerns that a recession is near or that fundamentals are breaking down.

The Atlanta Federal Reserve is forecasting first-quarter GDP growth at 5.4% – something we haven't seen since 2006. And FactSet reports that S&P 500 earnings per share (EPS) estimates for the first quarter are presently at a record high. A correction after last year's phenomenal run-up is healthy.

Several factors could have been at work, including algorithmic and high-frequency quant trading systems that appear to have made the call that it was a good time to take profits. Other investors seemed to have responded to the Labor Department report, which showed that wages in December grew nearly 3% year-over-year, their fastest pace since the financial crisis.

This is a clear sign that inflationary pressure is building, raising the likelihood that the Federal Reserve will hike borrowing costs more aggressively than some investors had anticipated.

As I've explained many times before, gold has historically performed very well in climates of rising inflation. When the cost of living heats up, it eats away at not only cash but also Treasury yields, making them less attractive as safe havens. Gold demand, then, has surged in response. This is the Fear Trade I talk so often about.

But which measure of inflation is most accurate? The consumer price index (CPI) rose 2.1% year-over-year in December. Then there's the New York Fed's recently launched Underlying Inflation Gauge (UIG), which claims to forecast inflation better than the CPI by taking into consideration a "broad data set that extends beyond price series to include the specific and time-varying persistence of individual subcomponents of an inflation series."

The UIG rose nearly 3% in December. And finally, the alternate CPI estimate, which uses the official methodology before it was revised in 1990, shows that inflation could be closer to 10%.

Whichever one you choose to look at, though, they all indicate that inflation is trending up. 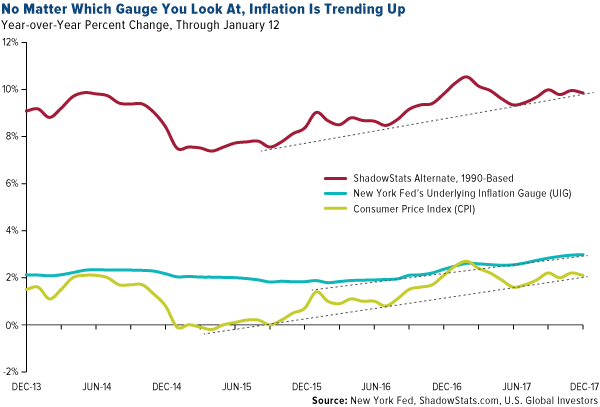 Making predictions is often a fool's game, but I believe that after lying dormant for most of this decade, inflation could be gearing up for a resurgence on higher wages and borrowing costs. Now might be a good time to rebalance your gold holdings to ensure a 10% weighting.

"This pick-up in inflation and inflation expectations is positive for gold," says BCA, "which we've shown to be an attractive hedge against rising prices."

Besides being favored as a safe haven in times of crisis, gold has a history of attractive performance over the long term. Compared to many other asset classes, the yellow metal has been very competitive in multiple time periods. 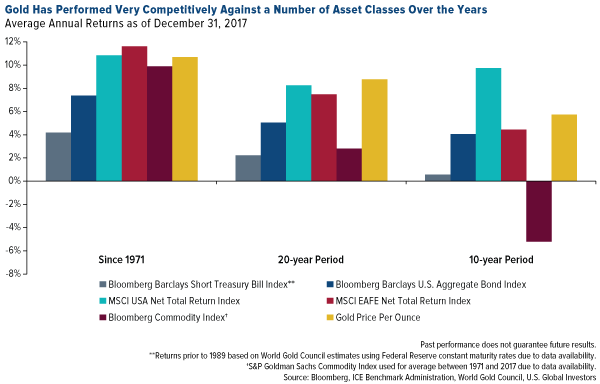 Since 1971, when President Richard Nixon finally took the US off the gold standard, gold has outperformed all asset classes except domestic and international equities, as of December 31, 2017. In the 20-year period, gold crushed domestic and foreign stocks, bonds, cash and commodities. Most impressive is that, in every period measured above, the precious metal has beaten cash, bonds and commodities.

Having a 5 to 10% weighting in gold and gold stocks during these periods could have helped investors minimize their losses in other asset classes.