END_OF_DOCUMENT_TOKEN_TO_BE_REPLACED

The age of runaway debt...
THIS YEAR marks the 50th anniversary of the end of the gold standard in the United States, writes Frank Holmes at US Global Investors.
In August 1971, President Richard Nixon formally unpegged the US Dollar from gold, meaning the greenback was no longer convertible into bullion. Overnight, the Dollar became a free-floating currency, measurable only by comparing it to other world currencies.
And yet there were still restrictions on private ownership of gold coins, bars and the like. It wouldn't be until President Gerald Ford signed a bill in December 1974 that Americans could freely buy and trade bullion, for the first time in over 40 years.
A lot happened as a result. Its price no longer fixed, gold exploded 385% from the end of 1974 to 1980, when the metal topped out at $850 an ounce as the US coped with historic levels of inflation.
Over the past 50 years, gold has expanded more than 46 times, with a compound annual growth rate (CAGR) of about 8%. 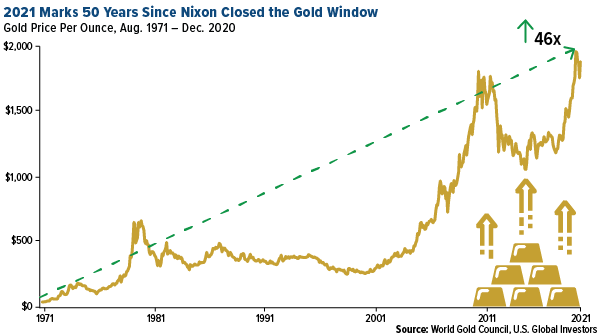 The ability to trade gold freely has obviously been good for investors. Today, gold bullion is one of the most liquid assets in the world, its daily volume standing at more than $145 billion, according to the World Gold Council (WGC). Only the S&P500 and US Treasuries trade more – but not by much.
The drawback is that, in the years since the end of the gold standard, there's been a significant and growing lack of discipline when it comes to government spending. Before 1971, there was a natural limit to how much money could be printed. New issuances were dependent on the amount of gold sitting in the nation's coffers.
Today, with the Dollar backed not by a hard asset but by the "full faith and credit" of the US government, the federal debt is closing in on an astronomical $28 trillion, which is more than 130% of the size of the US economy. 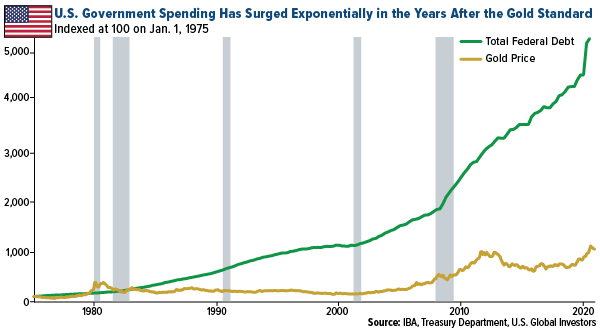 To give you some idea of how dramatically times have changed, federal debt in 1960 was only a little over half the size of the economy.
The debt is expected to surge even more in the coming months now that Joe Biden has been sworn in as President and Congressional control has shifted in the Democrats' favor. Biden, who turned 78 in November, has called for a $1.9 trillion economic relief package that include $1400 checks for all American adults.
I'm not advocating that we return to the gold standard. It's probably no longer feasible. According to the Treasury Department, official gold reserves currently stand at approximately 261 million ounces, for a market value of some $493 billion.
That's just not enough metal to support an economy as large as the US – not unless the price of each ounce of gold was fixed at something outrageous like $100,000.
There's been some discussion of making Bitcoin a reserve currency. Like gold, its supply is limited, and it has the potential to scale up. But at the moment, cryptos are far too volatile.
So for now, we're left with the current monetary system of unlimited money-printing, which in turn makes each US Dollar less valuable and each ounce of gold more valuable.
What this is all pointing toward is the rapid adoption of modern monetary theory (MMT). I've written about the concept before.
In short, proponents of MMT say that governments that issue their own currency, as the US does, are free to spend as much as they want, regardless of the amount of revenue generated. And if the government ends up with a spending deficit, it can just print more money to cover the difference.
Isn't this what we're already doing? In 2020, the federal government spent a total of $6.55 trillion, despite it collecting "only" $3.42 trillion – about half of that – in tax revenue.
What's more, the amount of M1 money supply – which includes the most liquid and readily available forms of money – was up an unprecedented 67% in December 2020 compared to the same month the previous year.
As Ray Dalio, billionaire founder of Bridgewater, the world's biggest hedge fund, has said a number of times, "Cash is trash."
So where does Dalio put his money instead? A look at Bridgewater's third-quarter filings reveals large positions in physical gold and gold mining companies. At 11.6%, the gold-backed SPDR Gold Trust is the fund's second-largest position. The fifth-largest position, at 3.4%, is the iShares Gold Trust.
Among the gold producers in Dalio's portfolio are Newmont, Yamana Gold and Freeport-McMoRan.
Besides the securities already mentioned, we also like to get exposure to gold and precious metal miners via the royalty companies.
Our two favorites that follow the royalty and streaming model, Franco-Nevada and Wheaton Precious Metals, have impressive track records of outperforming bullion and gold miners over multiple time periods, in bull and bear markets.
Franco significantly beat gold and senior producers during periods when asset prices were rising as well as falling. Wheaton similarly performed well over multiple periods. For the one-year, three-year, five-year and 10-year periods, Wheaton crushed not just gold and silver but also miners and the popular VanEck Vectors Gold Miners ETF.
These strong track records have resulted in the companies consistently returning value to shareholders. As of September 30, Wheaton had an incredible $1.2 billion declared in dividends. Franco, meanwhile, has had 14 straight years of dividend increases, with $1.4 billion paid out since its 2008 initial public offering (IPO).
Both companies are scheduled to report in early March, which I'm eagerly awaiting.