END_OF_DOCUMENT_TOKEN_TO_BE_REPLACED

Gold mining companies are suffering writedowns on the value of their projects...
For MANY PRIMARY gold mining producers, writes Jeff Clark, editor of Big Gold at Casey Research, the second quarter of 2013 was a breathtakingly bad quarter.
It wasn't so much the massive drop in earnings many reported – those had been, for the most part, expected – but the so-called "impairment charges" announced, otherwise known as writedowns.
Impairment is the opposite of appreciation. That is, the reduction in quality, strength, amount, or value of an asset. "Impairment charges" means that a company reduces or "writes down" the value of the assets on its books.
The gold price averaged $1630.45 in Q1 this year, falling to $1413.64 in Q2. The downturn squeezed profit margins, obviously, but it did the greatest damage to the value of many mining company assets that are based on gold.
But what will happen to those same assets if the gold price is on the rise again? What does it mean for us as investors? I'll answer these and more questions below.
First, here's a look at the amount of writedowns the six largest primary gold mining producers announced last quarter. 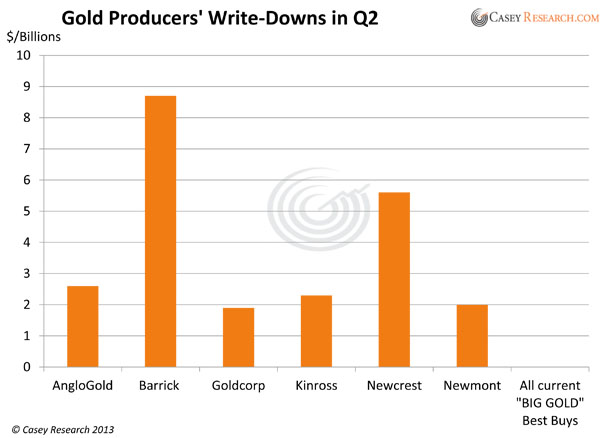