END_OF_DOCUMENT_TOKEN_TO_BE_REPLACED

If capex stays this low, then yes. Here's 4 ways this will impact gold investing...
OUR CURIOSITY was piqued as we reviewed the year-end reports of the primary gold producers, writes Jeff Clark at Casey Research.
And when we tallied the results, even we were surprised.
The upshot of what you'll see is that at its current pace, new gold mining supply will be unable to keep up with demand. It may look like a story that doesn't have much immediate impact, but this emerging new reality is staring us right in the face.
Specifically, there are three developments underway that paint an ominous picture for new gold supply...
Development #1: Slashed Exploration Budgets
One way management teams have adapted to the lower gold price environment has been to cut back on the amount of money they spend on exploration. It's an easy target, as exploration is expensive and provides little immediate value, especially when you're suddenly operating at little or no margin.
But take a look at just how much exploration budgets have been cut since 2011. 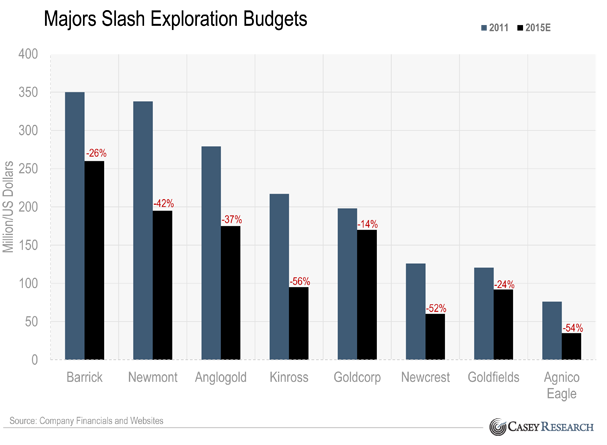 The drive to remain profitable has forced the world's eight largest gold producers to cut cumulative exploration spending by 36.5%. In fact, they'll spend $622.7 million less in exploration this year than in 2011.
It's not just producers, either. It's estimated that of the junior exploration companies listed in Canada, over $5 billion in "questionable" exploration assets are currently on the books. At current prices, some if not most of these assets won't be developed.
And it's not just happening in North America. SNL Metals and Mining reported that of the 250 Western Australia mining companies they surveyed, the amount of funds collectively allocated to exploration fell from over $1 billion in 2013 to about $630 million last year. According to HSBC chief economist Paul Bloxham, "Exploration is down about 30% year on year...It's at its lowest level since 2006."
Obviously, if the industry spends less money looking for gold, they'll find less gold. This dearth of exploration simply is not sufficient to keep pace with the current rate of depletion. And this trend shows no signs of reversing until gold prices are significantly – and sustainably – higher.
This will clearly impact how much gold comes to the market – but unfortunately it's not the only factor.
Development #2: Production in Decline
The same eight companies also provided their production guidance for 2015. Take a look at the projected output for 2015 compared to last year's (after adding Russian producer Polyus and South African producer Sibanye, both of which did not report exploration data).

Of the 10 largest gold producers in the world, only two expect their minimum level of output to materially rise this year.
Development #3: Reserves Have Disappeared
Perhaps most alarming is the decline in mineable reserves held by the largest producers. Look at the drop in just one year. 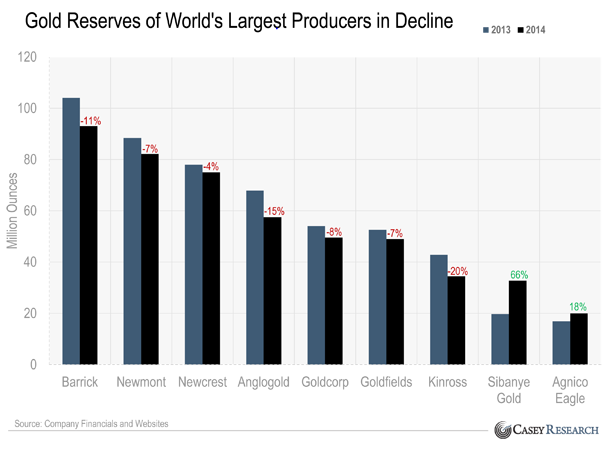 Reserves refer to ore that is economically mineable. For the seven producers that reported lower Reserves, the number of ounces no longer available totals 47.1 million. This is greater than half of annual global mine output! (Sibanye increased their Reserves only through an acquisition, without which they would've been substantially lower.)
While some "resources" will move into the Reserve category, that upgrading process has clearly slowed due to reduced spending. The point here is that the ounces previously considered economic no longer are.
Here's another way to look at how bad the loss of Reserves is:

In all cases but one, the loss of Reserves exceeded each company's entire output last year.
For producers as a whole, TD Securities estimates that total Reserves are down a startling 24% from the 2011 peak. And 2014 was the third consecutive year of reserve declines.
This trend is a freight train that will have obvious long-term effects. Slashed exploration budgets, production declines, and plunging Reserves clearly paint a sobering picture for future mine output. It's important because the world's most significant source of physical gold comes from mining.
It doesn't take a rocket scientist to see that at current levels of demand, low gold prices will impact supply – and in turn will push gold prices higher.
In the meantime, the longer prices stay at current levels, the greater the impact. For example, Harmony's all-in costs in Q4-2014 were $1262; how long can the company operate, with spot prices stubbornly below that level? There are other examples like this.
But won't these Reserves come back when the gold price moves higher? For many deposits, no.
First, many companies have been "high grading," where they mine the higher-grade portions of their projects. This "act of survival" maintains cash flow while gold prices are down. However, the result in most cases is that the low-grade material left behind is no longer economic, because it needs the high-grade ore to work. There will be exceptions, but they'll be just that. Second, companies can high grade only for so long; the longer gold prices stay at current levels, the fewer high-grade ounces left to mine.
And consider this: management teams have been burned by the severe and prolonged bear market to the point that they are gun-shy of expansions. They will be very hesitant to risk capital on new projects until they see the gold price not just higher, but in what they believe is a sustainable uptrend.
What all this data signals is that there is no escaping the reality of fewer ounces coming to market within a couple years.
CPM Group projects that new mine supply will begin to decline noticeably in 2018 – and continue to do so for at least six years. This is primarily because there's no way the industry will be able to easily or quickly recover from these developments – it takes years to ramp up exploration, find economic deposits, develop them, and reach commercial production. The situation is so serious that even with expected increases in scrap recycling, CPM projects total new supply will remain in decline.
The only scenario that could prevent my forecast from coming true would be if the world reached true economic growth and stability. This would, over time, decrease real demand for safe-haven assets like gold and potentially lead to selling by central banks and others – which would offset the decrease in supply and keep prices down for years.
But look around the world today – the Middle East is at war, nuclear Russia is rattling its sabers, China's aggressive moves for regional power are growing, Europe is a financial and political basket case and ripe for disintegration, numerous countries continue to aggressively devalue their currencies, and even the US government's own numbers soberly portray an unsustainable debt load that mathematically can't be overcome by even the most generous growth projections. Can anyone reasonably expect such a boom of prosperity and peace? Do you? I don't.
Because future gold supply will reverse trend and fall for many years, there will be significant long-term consequences for investors – most of which are positive if you're already positioned. If demand continues at anywhere near its current pace:
The bottom line is this: a major shift regarding gold supply is underway and will lead to a substantial, long-term decline.
This will have a meaningful impact on your gold portfolio. Of course, it will only apply to bullion you already own, not what you purchase then. In fact, if you need to sell some of your bullion to offset the rising cost of living, it is those who dally that will buy it at inflated prices and higher premiums.
Best of all, my time frame is based on the global economy continuing as it is – which it almost never does. Any major black swan event could make all of the above kick in much sooner. The truth is that another Lehman-type iceberg could be just ahead, and mainstream lookouts would have no more chance of seeing it through the political fog than the Titanic's lookout had of spotting that famous iceberg before it was too late. In other words, my bullish projections for precious metals could happen much sooner.
We've said it before, but it's still true: we think this setup makes current prices a must-buy opportunity. I encourage you to round out any bullion holdings you think you might need for the future now.
Of course, for every notch gold prices tick up, shares of gold mining companies should move even higher. And to help you spot the very best ones to invest in now, we've put together a stunning video presentation called, Going Vertical: Deep-Value Stocks to Own in a Rising Gold Market.
It's completely free. And you'll get insights into the sector, investment ideas, and hear from our expert panel including myself, mining icons Pierre Lassonde, Bob Quartermain, Ron Netolitzky and a few of the world's best speculators including Doug Casey, Rick Rule, Frank Holmes, and Louis James. Click here to watch this free video presentation.