END_OF_DOCUMENT_TOKEN_TO_BE_REPLACED

The impact of rampant debt and fiat money...

IMPOTENT monetary policies, rampant debt and credit deflation are all fueling a bull market for gold and Gold Mining equities according to Jay Taylor, editor and publisher of J. Taylor's Gold, Energy & Tech Stocks. Taylor shares his top investment themes with us in this interview with The Gold Report.

The Gold Report: Jay, what investment themes are you focusing on in your newsletter?

Jay Taylor: I focus a lot on the huge credit deflation that the markets are demanding. Debt has become so large that it cannot be serviced with the amount of income available. The so-called solution requires the creation of more debt money. In a fiat currency system, money is debt.

At some point, total debt levels have to be wound down to levels akin to the normal levels of the past when total debt to GDP in the US ranged between 175% and 225%. Following Lehman Brothers it grew to over 360%! These debt levels simply cannot be repaid from current income steams even with zero interest rates.

Those debt levels are leading to tension in the banking system that bodes very well for gold because people are starting to lose confidence in the banking system and in the fiat monetary system itself. As long as credit deflation remains intact, it will be a very bullish environment for gold and Gold Mining stocks.

Another major focus is what I call the "real" Gold Price. Is gold going up relative to most other things? Or, putting it another way, what will an ounce of gold buy? I like to measure gold's purchasing power in terms of the Rogers Raw Materials Fund, which includes energy, base metals, food and clothing related commodities like cotton and wool. Indeed, the real price of gold has risen dramatically from 17% in July 2008 just before the Lehman Brothers failure to something like 44% of the fund by March 2009 (See chart below); it has risen to 49.5% at the height of the European crisis a few months back. 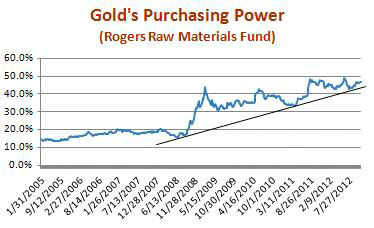 From 17% pre-Lehman Brothers in July 2008 to 47% at the end of October, the trend of gold's purchasing power in terms of how much of the Rogers Raw Materials Fund it will buy is in a clear and dramatic Uptrend. Not surprisingly then, the profits of major gold producers has risen as demonstrated in the chart above.

It is not a coincidence that Gold Mining profits of the big household names in the gold space rose along with the real Gold Price.

To keep track of how the big Gold Mining firms are doing, I follow the earnings of seven majors. If you add up the per-share profits, their consolidated per-share profits went from $8.30 in 2008 to $20.50 in 2011. The consensus analyst estimates for 2012 are down a bit to $19.75 in 2012. For 2013, the latest prediction of the collective profits for these seven companies are $24—almost triple where they were in 2008 on the eve of this major ongoing credit deleveraging crisis.

TGR: Their per-share profits may have tripled, but their share prices have not performed anywhere near that well. One reason for that performance gap is cost increases. Are there other reasons?

Jay Taylor: Capital expenses (capex) have increased a great deal from the post-2008 recovery. Many of the big companies are plowing huge amounts of money back into the ground, and sustaining capex is rising, so they are expending a considerable amount of cash to expand or just to keep producing large amounts of gold.

But at least since Lehman Brothers, day to day operating costs have declined. As a result, the cash flow from operations has risen dramatically.

The other reason share prices have not risen is most of the market believes that $1,700/ounce (oz) gold is near its peak. In short, unlike me and others who follow Austrian economic theory, most investors do not understand that gold is money and that as long as the credit market problems persist, it will become increasingly valuable. Americans especially are ignorant about gold. They are much more likely to buy Facebook or Google; they do not even consider buying gold shares. At some point, these people will wake up to the reality that the Gold Mining companies, not the Federal Reserve, have the power to produce money—at least money people can trust.

TGR: Your Inflation-Deflation Watch (IDW) index measures major commodities and equity and bond indexes. It suggests that we are on the verge of an inflationary breakout. Has the IDW consistently tracked previous breakouts in the Gold Price?

Jay Taylor: I started the IDW in January 2005, so it does not have a long history. We had a brief period of deflation from the index's starting point of 100 to around 94, following the Lehman Brothers collapse, and then it started to rise. Last year, it hit new highs. Now, with each successive quantitative easing (QE), the IDW is having a hard time making new highs. We are seeing lower highs and lower lows. (See chart below). 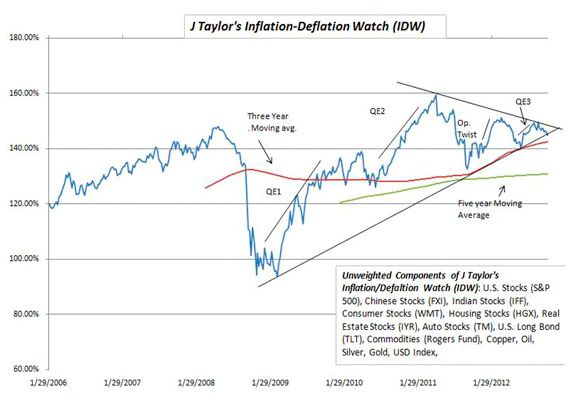 Now, I am not sure which way the IDW is going to break out. We have a pennant formation here: If you draw a line through the top points of the IDW and a line through the bottom points of the IDW, you will see that a moment of truth is quickly approaching. It may not be decisively up or down; it may meander for a while. But we may be perched on a knife's edge, in which we may now be facing a moment of truth in how our current economic pathology plays out. We could be on the verge of either a hyperinflationary depression or a deflationary depression, which Bob Prechter, Ian Gordon and others believe will make the 1930s period look like child's play.

What I do think is undeniable is that QE is increasingly impotent. I personally believe we are most likely headed toward a deflationary depression. Unless the Fed and other central bankers completely obliterate the capitalist system and turn to a statist system, and distribute trillions of Dollars to lower income and middle income people, I do not see us getting to hyperinflation.

TGR: An inflationary breakout could be good for the Gold Price, but possibly bad for mining equities if costs rise faster than the price of gold.

Jay Taylor: I absolutely agree. In a hyperinflationary scenario it becomes very difficult to like Gold Mining stocks or any kind of business activity because it is so difficult to plan. In that environment, you want to own physical gold and silver, ideally free and clear of debt.

TGR: Do you have any insights to leave our readers with today?

Jay Taylor: Lots of money is to be made in the right kind of Gold Mining companies. I am much more bullish on gold than other commodities, in large part because I do not see good, solid economic growth around the world. I would like to think you could make money producing other minerals that would help people more than producing gold that will just sit in vaults. But that is the reality.

The markets are forcing us to acknowledge the truth that gold is real money. The markets and the truth are rearing their beautiful heads. That is the real positive news.

TGR: Thank you very much, Jay.