END_OF_DOCUMENT_TOKEN_TO_BE_REPLACED

INVESTORS should have gained confidence from Ben Bernanke's recent testimony to Congress that the Federal Reserve intends on being accommodative as long as needed, writes Frank Holmes of US Global Investors.

Bernanke had a laundry list of job market conditions that needed improving and reiterated that inflation remains low. It's his belief that "a premature tightening of monetary policy could lead interest rates to rise temporarily but would also carry a substantial risk of slowing or ending the economic recovery and causing inflation to fall further."

The Fed's news is "great for all of us in stocks...and not so great for those with cash in a savings account, with real negative returns for the past four years," reminded Money Map Press. Yet, at least in the short term, markets interpreted Bernanke's testimony differently, as stocks dropped during the week of May 20.

The news should also be good for gold investors. Not only is the Fed maintaining its course, the world is also continuing its synchronized easing. According to Deutsche Bank, central banks representing almost 30% of global GDP are cutting rates.

The rate cuts are spread out over nearly every continent, as you can see on the great visual below, posted by Business Insider. Turkey's central bank cut its benchmark interest rate more than expected in April by 50 basis points and then another 50 basis points in May. Serbia also slashed rates by 50 basis points, as did Sri Lanka. Even the European central bank reduced its main rate to a record low 0.50 percent. According to Bloomberg, ECB President Mario Draghi is "promising to provide as much liquidity as Eurozone banks need well into next year." 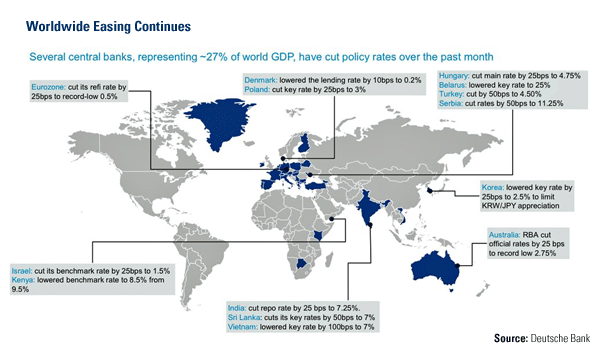 With this global easing cycle, the gold price and equities had been moving together, but have been taking vastly diverging paths in the past six months.

In fact, the gold-to-S&P 500 Index ratio has fallen to lows not seen since 2008, according to UBS Investment Research. This extreme indicates that the precious metal may be looking more attractive. In addition, "gold's resilience in spite of very weak investor sentiment is encouraging, with recent price levels having acted as a good floor so far," says UBS. 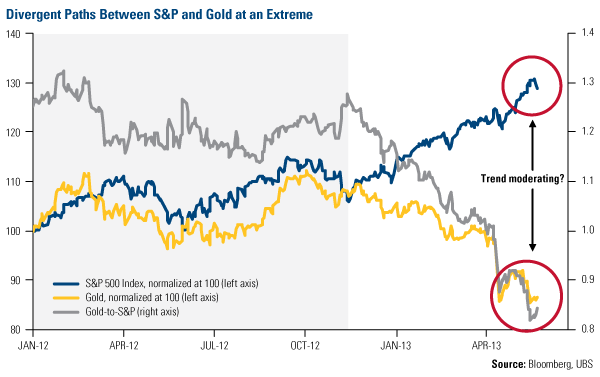 As I often remind investors, gold buyers are a diverse group, but generally fall into one of two categories. Most of the attention gets focused on those who purchase out of fear of damaging government policies (i.e., the Fear Trade).

The more important demand for gold, in my opinion, comes from the enduring Love Trade, as countries like China and India buy the precious metal out of love and tradition.

Looking at a breakdown of gold demand from the World Gold Council (WGC) through March 31, 2013, the main source of weakness was the Fear Trade, as demand for gold ETFs and similar gold products plunged in the first quarter. However, the Love Trade scooped up jewelry and bars and coins, with the tonnage in each category growing 12 and 10 percent, respectively, on a year-over-year basis.

You can visually see the strength of the Love Trade below in the year-over-year change in total consumer demand in tons for gold jewelry, bars and coins. Indian demand grew the most, increasing 27 percent compared to the previous year. Demand for jewelry, bars and coins in the greater China area increased 20 percent, as "seasonal strength in China, related to Chinese New Year purchasing, exceeded all previous peaks, marking a new record quarterly high," says the WGC. Even US residents had a love for gold, with demand growing 22 percent over the previous year. 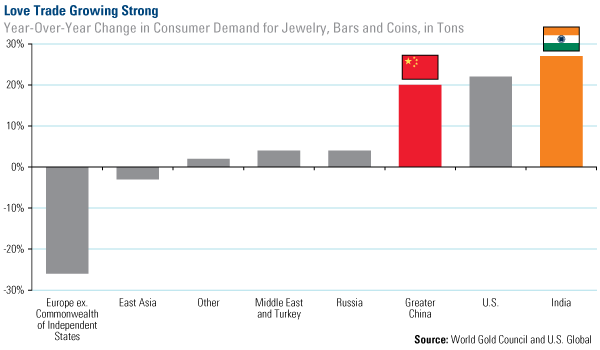 The Love Trade doesn't look like it'll subside anytime soon. I recently discussed the record amount of coins purchased through the US Mint and the buyers crowding stores in multiple Asian markets when gold tumbled in April. It appeared that gold was transferring from weak hands to the strong hands of the Love Trade.

As one example, on the Shanghai Gold Exchange, trading volume surged to a record 43.3 tons on one day in April, as buyers clamored to buy the metal at a great price. Gold purchases are getting so strong these days, buyers are willing to pay a premium, says Mineweb. The mining publication reported that premiums on gold bars are climbing to all-time highs in Hong Kong and Singapore, with Chinese residents paying $5 to $6 an ounce over the spot London price due to classic economic one-two punch of huge demand and tight supply.

According to data from the Hong Kong Census and Statistics Department, "net gold flows from Hong Kong to China jumped to 223.519 tons in March from 97.106 tons in February, smashing a previous record of 114.372 tons in December," says Mineweb.

This is the Love Trade in action.