END_OF_DOCUMENT_TOKEN_TO_BE_REPLACED

Can Western gold investing rely on China + India to put a floor under 2017 prices...?
GOLD INVESTING prices rise when Western money managers buy or bet it will rise, writes Adrian Ash at BullionVault.
Asian households then buy all the gold they can get, most especially in China and India, when prices fall.
That, in a nutshell, is how the global gold market works, or has done at least since gold investing was made legal for US citizens after a 40-year ban ended in 1975.
Global demand, for instance, set a series of new all-time record highs (on the best available data) as prices slid towards 20-year lows in the late 1990s. The metal's nadir of 2000 then saw new full-year record demand in India, Turkey, the Gulf States (demand from Islamic households being nothing new), Mexico and Vietnam, with Saudia Arabia's demand almost matching its 1992 peak.
More recently, this pattern led to the 7-fold gains of 2001-2011. It then shifted the untold mountain of gold which went East over the 5 years that followed. It also explains why gold didn't surge higher when India and China buyers jumped on the 2013 crash.
Yes, China and India between them account for one ounce in every two sold to end-users each year. And yes, they bought record quantities of metal as prices fell 25% in 2013.
But while Western money managers like to chase trends higher or lower, the heaviest gold consumers tend to act smarter, building their holdings fastest when the metal looks cheap, ready to ease off or take profits when prices jump. 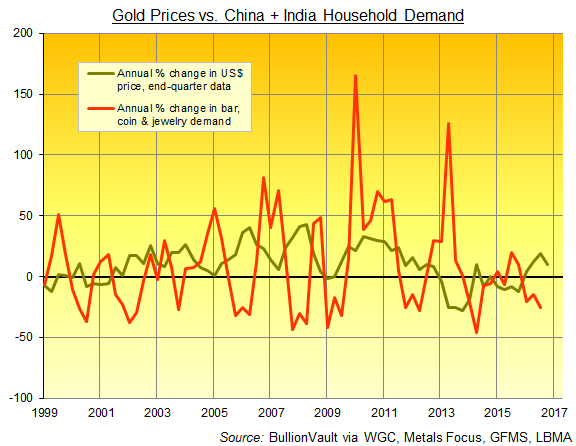 Fast forward to 2016, and Chinese and Indian imports both fell hard in the first half of this year, with metal flowing instead into London vaults – centre of the world's wholesale market, and home (alongside Switzerland) to the largest private investing hoards.
Since July, gold prices have more than halved their prior gains for the year as professional investing has reversed course. That retreat in prices has also seen demand from gold's Big Two turn higher yet again. But here on the cusp of 2017, Western investors relying on China and India to stem the current post-Trump dump might need to take care.
"After a sustained fall in any asset," explains strategist Tom Kendall at Chinese-owned bullion and commodities giant ICBC Standard Bank explains, "there is a risk of turning bearish just as the market finds a floor.
"The problem for gold right now is that the mechanism by which that floor is created has largely seized up. [Because] intervention by policymakers in both India and China has disrupted, at least temporarily, the market's natural reaction function."
Intervention hardly describes New Delhi's nuclear attack on India's entire economy. As you may know, it has caused a cash-crunch across India – the number 2 gold investing and jewelry consumer – by cancelling 85% of its currency in circulation. The aim is to kill the black-market economy. It has badly wounded if not shot dead the legal gold industry in the cross fire.
Formerly pro-gold Beijing is meantime restricting new import licences for gold into China, hoping to stem the outflow of money starting to drag on (and also inspired by) the falling Yuan currency.
Ahead of the Chinese New Year, that has seen Shanghai prices rise $30 above London quotes, the highest premium in 3 years.
Typically, this would signal strong demand in the No.1 consumer market, and that would eventually feed back into stronger global prices according to this close analysis by Neil Meader at specialists Metals Focus. Because Western traders and fund managers would take stronger Chinese demand as a bullish signal, if only short term.
Unlike the massive premiums of 2013 however, this end-2016 Shanghai premium is a supply-driven thing. Yes, demand appears to have turned higher on November's drop, with retails sales of kilobars in Hong Kong making the Wall Street Journal's pages as a useful proxy. But November's raw delivery data for metal taken out of the Shanghai Gold Exchange's warehouses (China's only legal route into private circulation) showed just a 6% pop from the same month last year, and only after lagging 2015 throughout.
Year-to-date, those SGE withdrawals stand 25% lower from 2015's record. That reflects the typical bargain-hunting response of shying away when gold prices rise. But now it is blocked from taking advantage as prices retreat. Indeed, per Meader's analysis, this month's news about China's Communist government turning against gold could invite more bearish bets by Western hedge funds. Because while the myth of "gold to da moon!" because of Chinese demand proved truly mythic over the last 5 years (see how the gold market works, above), Beijing had previously encouraged private households to diversify their savings with gold in the same way the People's Bank has diversified some of its giant foreign-exchange reserves too.
Beijing's switch from gold-promoting to gold-restricting isn't getting anything like the coverage it warrants, least of all on the bug-o-sphere which trumpeted the one-party state's pro-gold adverts and editorials so hard. But maybe India's experience is finally looking too close for comfort to the politburo. Because "gold risks denting [China's] trade surplus – a key plank of [its] economic-growth model," as we noted 5 years ago, when China's gold imports overtook its world-leading domestic mine output. Back then it didn't matter, thanks to China's broader export-led boom. But it might now.
Just look at India – as we shall in Part II...