END_OF_DOCUMENT_TOKEN_TO_BE_REPLACED

Still waiting for that headline, plus the $5000 rapture it will bring...?

"CHINA BUYS GOLD" is the story that every journalist writing about commodities wants to break, and the headline that gold bugs the world over most want to read.

Because if (or when) the People's Bank of China shifts from quietly adding domestic mine output to its reserves...and starts buying gold bullion in the international market instead...the rapture of $5000 gold will be upon us. Apparently.

It's unlikely to play out quite like that, however – not until 2016 at least. First because Beijing's policy wonks aren't so stupid. And second, because "China buys gold" is already old news. 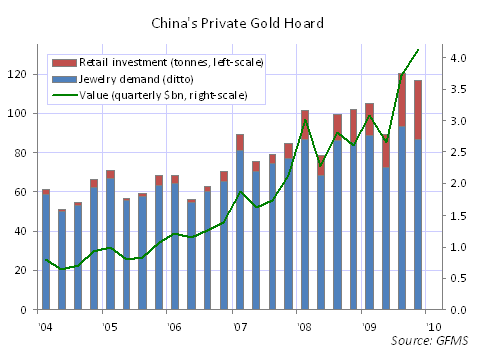 Mistaking a part for the whole – and assuming that China means the People's Bank alone – means missing the huge growth in private Chinese household demand of the last 5 years.

Rising 85% by weight since 2004, China's private gold demand has more than quadrupled in Dollars. It pretty much doubled by value in terms of both Dollars and the Renminbi in the last two years alone, rising to $13.6 billion in 2009.

Overall, China accounted for more than 14% of global gold investment and jewelry demand last year on the World Gold Council/GFMS data – a close second to the 16% of private world hoarding swallowed by India.

Now the World Gold Council forecasts that China's annual gold consumption has the potential to double in the next 10 years. Its new report notes the link between China's gold demand, runaway GDP growth, and phenomenal household savings rate. But it doesn't put a figure on that relationship, which in fact offers a blunt rebuke to the idea that modernization and consumer capitalism would see Gold Investment cast off as a barbaric relic in China... 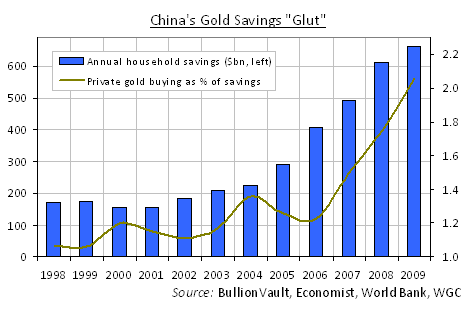 Based on World Bank estimates of China's household savings rate – probably worth some $660bn last year – the proportion of private savings spent on gold investment and jewelry each year has almost doubled to 2.1% since the market was deregulated in 2001.

Yi Gang, deputy governor of the People's Bank of China and administrator of the State Administration of Foreign Exchange (SAFE), recently estimated that private households own some 3000 tonnes of gold. Two-thirds of that has been accumulated in the last 5 years alone. Those 1890 tonnes outweigh by four times the gold bought by SAFE and then transferred to the People's Bank between 2002 and 2009.

Perhaps that's been just as Beijing intended. Gold Mining output is a strategic target in the regime's current 5-year plan. Sending money overseas to plug the widening gap between local supply and demand, private citizens help reduce China's side of the global trade imbalance. They've also, all told, drained some $44bn from the banking system by swapping cash and bank-deposits for metal since the start of 2004. They'd clearly like to buy more, too.

"The size of the gold market is limited," Yi went on. "So China's [official] purchases of gold in the global market would push up global prices...China's domestic Gold Prices are related to global prices, so Chinese consumers will face higher prices and they won't like it."

The People's Bank, in other words, is sticking with its policy of buying domestic mine production for its own reserves – rather than open market supplies – because it's worried about upsetting China's voracious gold-buying public. Which is awfully sweet of the Communist dictators. Trouble is, based on below-ground reserve estimates and the surge in China's mine output, China's gold mines could be spent within six year says data from the US Geological Survey. So if the People's Bank finds good cause to keep Buying Gold in 2016, it will have to turn either to the global market...or pick up non-mine supplies closer-to-home...where it will just happen to find an extra 6,000 tonnes, according to the World Gold Council's projections, added to today's privately-held jewelry, coins and bars. 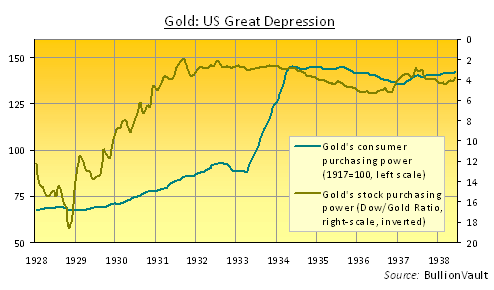 Nationalizing private gold was what the US government did, under F.D.Roosevelt, when it banned private gold-bar and coin ownership in 1933. That post-inflationary slump known as the Great Depression – which merely paused, and didn't halt, the United States' progress as world No.1 economy – would have proved a great time to preserve wealth with gold. But the Treasury confiscated gold on pain of a $10,000 fine or imprisonment. Which was a pity, especially after the official price hike which then revalued gold from $20.67 to $35 per ounce.

Because if you could have clung onto your gold, and realized its value as the Great Depression bit, you would have found the price of listed equities cut by 90%, and the cost of living cut in half.

That's something China's private gold-buyers might want to bear in mind today...if only they can get money offshore to buy it and keep it there...far away from the People's Bank.

Buy Gold and own it in Zurich, Switzerland...outright and free from counterparty risk...from just $4 per month by using BullionVault...