END_OF_DOCUMENT_TOKEN_TO_BE_REPLACED

Gold ETF surge offsets plunge in consumer demand...
GOLD INVESTING led by European ETF trust funds offset a plunge to 2009 crisis lows in global consumer demand during the first quarter of 2020, new figures show.
That took bullion prices higher as governments fought the novel coronavirus pandemic with unprecedented economic shutdowns.
As state-imposed lockdowns hit two-fifths of the world's population by end-March, jewelry demand fell to record quarterly lows on the World Gold Council's data, supplied by specialist analysts Metals Focus and running back to 2010.
Added to gold coin, small bar and also industrial purchases, that saw demand for all fabricated gold products set an 11-year low on data from the Council's former data suppliers GFMS, now called Refinitiv, totalling almost 400 tonnes less than the first quarter's global mine and scrap recycling supply at just 753 tonnes.
Offsetting this slump, central-bank demand held firm and gold coin buying jumped, while the extra quantity of gold needed to back exchange-traded trust funds – used by investors wanting to track cash gold prices without owning any metal – hit its largest in 4 years, rising over 11-fold from the last decade's quarterly average.
Gold-mine output in contrast fell on the WGC's data from Metals Focus, down 2.6% year on year to its lowest since Q2 2013, when the worst gold price crash in 3 decades crushed producers' profit margins just after the sector had borrowed and spent record sums on mergers and acquisitions at what currently remain all-time record high gold prices in US Dollars.
"Stringent lockdowns also reduced the ability of consumer to exchange gold for cash," the WGC explained in a conference call presenting the new data on Friday. "Some consumers also chose to hold onto their gold because of the virus crisis' economic hit, expected further price gains to come as a safe-haven asset."
Even so, scrap supply recovered from old jewelry and industrial use rose to equal 68.3% of new jewelry and industrial demand. That compares with the last decade's average of 52.2%, itself sharply higher from the 2000-2010 average of 44.2%.
That Q1 jump in scrap vs. consumer demand extended the underlying trend seen since mid-2019, when gold prices turned markedly higher on steep downgrades to global economic growth forecasts and scrap sales began to rise when compared to the volume of new jewelry and industrial demand. 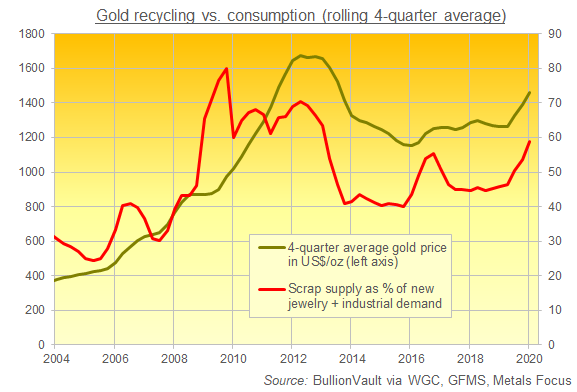 "Jewelry fabrication volumes typically account for around 55% of total physical demand," Refinitiv said this week.
But that proportion fell below 41% in Q1 2020, with the quantity bought by jewellers worldwide plunging more than two-fifths by weight from last year's January to March quarter – a key period which includes the Chinese New Year and ends just before the Hindu spring festival of Akshaya Tritiya, typically another peak in household demand.
"As the scale of the pandemic – and its potential economic impact – started to emerge, investors sought safe-haven assets," says the World Gold Council in its Q1 commentary, reporting that overall demand "grew marginally" to 1084 tonnes across the quarter, up by 1.9% from Q1 2019.
Gold ETFs listed on European stock markets accounted for just over half that investing sector's growth of 298 tonnes, with North American products – most of which also vault their bullion backing in London, heart of the global precious metals market – accounting for 43%.
Trust funds with their primary listing on the London Stock Exchange led that European growth, accounting for 90 tonnes of the 150-tonne expansion against 10 tonnes for products listed in Germany, 20 tonnes for Switzerland, and nearly 24 tonnes for France.
Total supply fell by 3.8% as anti-Covid lockdowns hit both mine output and scrap flows.
On a rolling 4-quarter basis, that mine output retreated by 2.0% over the last 12 months from the record set two years before. But at 3,459 tonnes, it remained almost 1,000 tonnes above the level of a decade ago.
As for households selling jewelry to raise cash as lockdowns ease but the economic impact doesn't, "We agree that India's scrap sales will increase this year," says Metals Focus in a separate note on gold's No.2 consumer market behind China, "[but] we do not believe that India will replicate the scenes witnessed in Thailand last month.
"The current economic and social backdrop lends itself to a jump in distress selling. However, the Indian mindset can be quite different as selling back gold is usually regarded as a last resort. Instead, many Indian consumers prefer to pledge their gold with banks and non-banking financial companies (NBFCs) [to raise a lower-cost loan] rather than making an outright sale."