END_OF_DOCUMENT_TOKEN_TO_BE_REPLACED

FOLLOWING on from our previous article on the changing composition of US currency, we will now look at the period 1941-70, writes Nathan Lewis at New World Economics.

We are basically describing how the US currency went from a rather varied mix of items to one single monopoly currency issuer, the Federal Reserve. The postwar period is not as interesting as the 1880-1941 period, but it helps us finish our story. 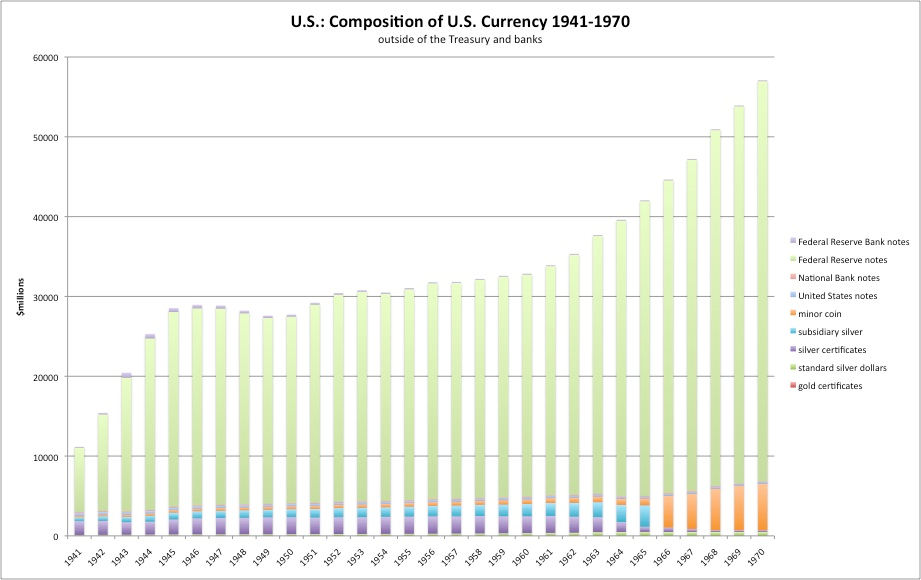 During World War II especially, the number of Federal Reserve Notes in circulation expanded dramatically, while other forms of currency basically held even. Why? As was the case during World War I as well, the Fed was under pressure by the Treasury to maintain Treasury yields at low, fixed rates. This entailed buying Treasury bonds with "the printing press" – in this case almost literally so.

Federal Reserve Bank notes are apparently notes issued by the Federal Reserve regional banks, such as the St. Louis Fed. They had a bit of a burst during WWII, and then died out.

Federal Reserve Notes are the "Dollar bills" we use today.

National Bank Notes are notes issued by private commercial banks. This was organized under a system known as the National Bank System. There were over three thousand commercial banks issuing their own bank notes, each one with their own design, all of them linked to gold of course. This system pretty much died out in the late 1930s. The notes here are basically collector's items.

United States Notes are the "greenbacks" printed by the US government during the Civil War. These are basically collector's items.

Minor coin is non-silver and non-gold coins, basically pennies and nickels. This expands considerably after 1965, because half Dollars, dimes and quarters, which had been made of 90% silver, were then produced in base metals. So, minor coin then encompasses all coins.

Subsidiary silver is silver coins in less than a one-Dollar denomination, namely, quarters and dimes. This is combined with Minor coin after 1965.

Silver Certificates were notes issued by the US government, redeemable in silver. These were significant for quite a few years after WWII, and then disappeared when the silver coins went to base metals.

Standard Silver Dollars were $1 silver coins, such as Morgan Dollar and Peace Dollars.

We see that, by the end of this period, the currency consists entirely of Federal Reserve Notes, base metal coins, and what amounts to collector's items.

Looking to build up your gold and Silver Bullion holdings? Discover the advantages of low cost, secure storage when you buy on BullionVault...