END_OF_DOCUMENT_TOKEN_TO_BE_REPLACED

Buying and holding a commodity like gold may be the most ignorant strategy ever...

THIS IS heresy to some gold "experts" who think they can predict its price direction, writes Michael Covel in Addison Wiggin's Daily Reckoning.

But here's the cold hard truth: The market doesn't care about what you, I, or any "expert" thinks should happen.

To make money from gold, you're either on the right side or the wrong side of the price trend.

Today, I'm going to show you how to be "right" when investing in gold...

Let's take a look at what's happened to the price of gold this year... 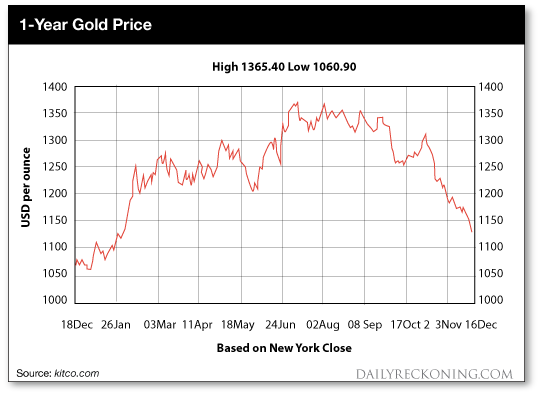 Gold started the year on a tear following a December 2015 Fed rate hike, sharply declining oil prices and trouble in China that sent stock markets around the world tumbling.

And as the gold price trended higher, Wall Street and Main Street jumped on the bandwagon...

In May, J.P.Morgan told clients to "position for a new and very long bull market for gold."

Goldman Sachs joined the party in June by raising its average gold price forecasts in the near and long term, extending into 2018.

And Merrill Lynch as recently as early October recommended buying gold on a brief dip because its analysts believed that when the Fed raised interest rates, stocks would sell off, the dollar would rally, and investors would see gold prices trend higher.

But there was one big freaking problem...

These "trust us" recommendations never gave you an exit plan.

Most investors just followed the tried-and-true "buy and hope" strategy. They bought and hoped gold stocks would continue to move higher as the "experts" predicted.

How'd that work out for them?

Most people who bought and held on without a clear exit strategy are down big.

Like many commodity markets, gold is famous for its boom-and-bust cycles.

Gold is especially vulnerable to emotional investing. Every nervous global twitch can cause a big swing in prices because so many people have their political beliefs tied to gold.

The bottom line is it's incredibly hard to consistently make money in gold if you're simply buying and holding, instead of using a systematic strategy like momentum-focused trend following trading.

Sure, you may get lucky once in a while and thus imagine you are the next "Oracle of Omaha." But what I'm talking about is a system of capturing strong, repeatable gains in the long run, in whatever market that's trending.

For example, my proprietary Trend Following system triggered a buy signal for gold stock Hecla Mining on April 20 – and a sell signal on October 10, capturing a solid 43% gain.

But the immensely important point is my system triggered a sell signal as soon as the trend changed.

The big-time decline was avoided.

If you followed my straightforward system, you would have not only pocketed a gain of 43% – but also avoided the big loss.

But most don't know to follow this kind of momentum, crowd-following system.

Instead of going with the trend no matter what, they fantasize about forecasts of gold going to the moon...and then on to Mars.

And they're still waiting for it to happen because the thrill of being right is more important to them than making money.

But while significant numbers of investors were dreaming about making a fortune in gold while stockpiling for Armageddon, the trend changed like a bucking bronco.

Most of these investors were gobsmacked.

Remember, when any market moves either up or down, you either get on board on the right side of the trend or you get killed. Guaranteed.

So ask yourself: Are you riding the gold trend? Or are you just guessing gold's direction?