END_OF_DOCUMENT_TOKEN_TO_BE_REPLACED

Yes, rates matter to gold. But not like 'real' rates do...
IS GOLD off the bottom? asks Jim Rickards in Addison Wiggin's Daily Reckoning.
No one knows for sure. If the Fed raises interest rates on Thursday – which we do not expect [ and which it didn't since this was first posted] – the effect will be highly deflationary and gold prices could move lower, at least temporarily.
Conversely, if the Fed doesn't raise rates and offers some reason to believe it won't raise them for the foreseeable future (so-called "forward guidance"), then gold prices could rally in anticipation of inflation.
It's unfortunate that markets are now reduced to reading Janet Yellen's mind. But that's what happens after seven years of market intervention and central planning by the Federal Reserve.
Using my system, which combines complex dynamic systems analysis with unique access to relevant information, we're able to draw some useful inferences about the future path of gold prices. Our estimate is that gold has now found a bottom and is poised to move steadily upward from current levels.
For those who are fully allocated in physical gold (I recommend about 10% of investible assets), there's nothing more to do on that front. You can just sit tight and enjoy the ride.
For those who do not have the recommended allocation to physical gold, this is an attractive entry point and a chance to top up your allocation at the best prices in six years.
It's certainly been a long and volatile ride for gold investors. Starting from a low of about $250 per ounce in mid-1999, gold staged a spectacular rally of over 600% to about $1900 per ounce by August 2011. Unfortunately, that rally looked increasingly unstable toward the end.
Gold was about $1400 per ounce as late as January 2011. Almost $500 per ounce of the overall rally occurred in just the last seven months before the peak. That kind of hyperbolic growth is almost always nonsustainable.
Sure enough, gold fell sharply from that peak to below $1100 per ounce by July 2015. The 15-year chart still shows a gain of about 350%, but the four-year chart shows a loss of over 40%.
Those who invested during the 2011 rally are underwater, and many have given up on gold in disgust. For longtime observers of gold markets, sentiment is the worst they've ever seen. 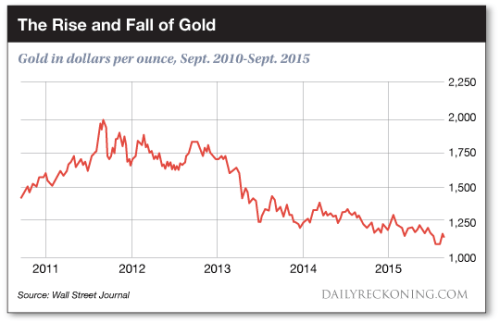