END_OF_DOCUMENT_TOKEN_TO_BE_REPLACED

Just when you thought it was safe to dismiss the fears behind gold's 2011 top...
The GOLD PRICE destruction culminating in late June brought out the usual suspects to school us ever since about why gold is all done as a worthy investment in an era of economic revival, writes Gary Tanashian in his Notes from the Rabbit Hole.
That comes compliments of heroic policy making by Ben Bernanke and Associates. Perceptions are now fully cemented toward policy maker control and a new global growth cycle.
These gold-negative voices included a pair of academics, the widely followed media star Nouriel Roubini and a lesser known writer named Robert Wagner, who has been riding the gold bear wave with a series of articles at SeekingAlpha, talking about how the main pillar supporting gold – the fear trade – is dead.
So we have a perma-bear and new-era bull coming at the barbarous, non-dividend paying relic from both sides. Excellent! Just as a tidal wave of knee jerking financial refugees piled into the 'fear' trade – as Wagner calls it – in 2011, the tide has spent two years slowly going out. But now the tide is starting coming in again on gold even as happy stock market and economic perceptions are being cemented; just as gold is doing this... 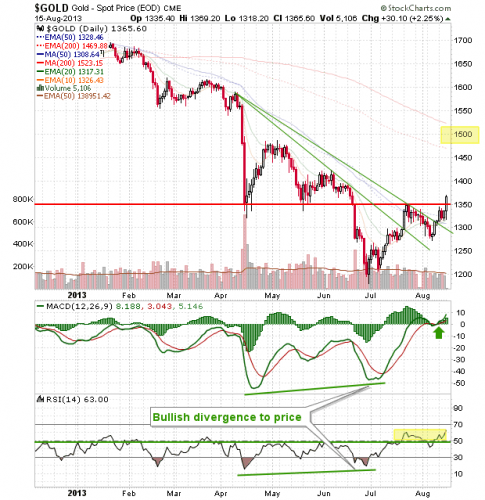 Our downside targets had allowed for just below $1000 per ounce up to the mid-1250s. The gold price poked down below $1200 amid fear, loathing, angst and all the other good stuff you need for bottom making.
But it did this while putting in a bullish divergence by the momentum indicators even as all the reasons to puke gold were chronicled by people who had waited a decade to do so. These reasons were also readily obvious to the public and the public puked gold, and the new found and cartoon-like gold bug ideologies they adopted in 2011.
Gold fanned upward from the positive momentum divergence and has now broached an important resistance level. This as the stock market appears to be cracking just as promoters there tout a new secular bull market for the public to suck on. Here's the big picture chart... 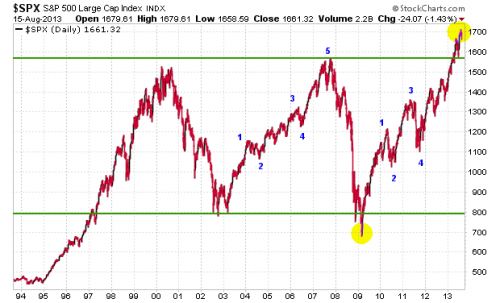 In two years Ben Bernanke has gone from a goat (as "bond king" Bill Gross poked him in the eye with a famous and ill-fated inflation inspired Treasury bond short position) to "hero" with his self-satisfied mug on the cover of a major magazine.
The point though, is that the S&P 500 stock-market index is only doing the equal and opposite upside thing to its overdone downside in 2009, which of course launched the cyclical stock bull amid epic suicidal sentiment.
Now we have people promoting a new bull market, players all-in on margin and the public moving in hard as well. The supporting data is beyond this post's scope. Go look for it, you'll find it. A "new secular bull market" is what people who think they are somehow being contrarians 4.5 years into a rapidly maturing cycle think.
Here's a closer look at the S&P 500... 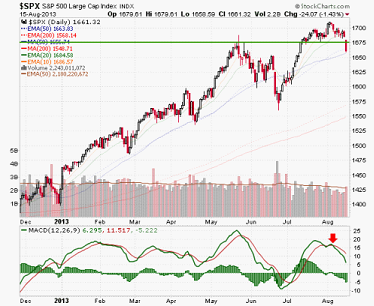 Oops, well maybe it is just another 'buy the dip' or maybe it is the final 'oops', coming with a new fairy story fully told and all the right players positioned as they should be, with people who buy promotions all in and people who don't prepared for big changes on the macro.
Regardless, the right people are lining up on the wrong sides, just as changes are set to come about. This is signaled by the impulsive moves in the precious metals (led by silver) and yesterday it manifested in a break upward through resistance by the Gold/S&P ratio. 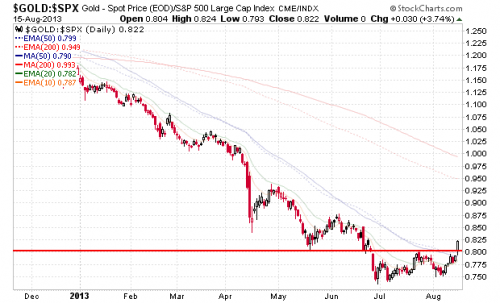 This chart shows the gold price divided by the S&P 500 index, giving a relative measure of bullion vs. equity. Note the break above resistance and the 50-day moving averages.
A little history; we used a monthly chart of the inverse – the S&P index divided by the gold price, like the one below – to remain aware of just how bad things could get for gold and/or how good they could get for the stock market. 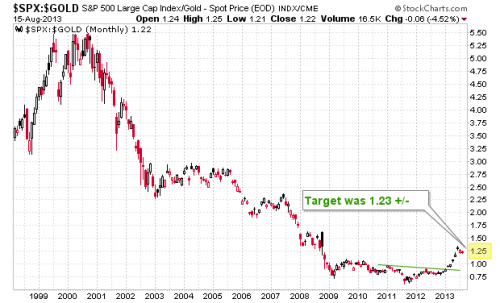 Once the 1.23 target area off of a clear bottoming pattern was satisfied, gold no longer had this technical need hanging over its head in relation to US stocks. So with perceptions fully cemented in an equal and opposite way to March, 2009, 4.5 years into a very mature cycle, we are ready for change.
But the precious metals have been led by the impulsive and excitable little brother, silver. Going forward the stodgy old man, gold, could play some catch up.
We are now capitalizing and this could run for some time to come. But the precious metals promoters are licking their chops now as they know full well it is time to suck in the herds. There will be corrections and volatility going forward but as I have done from day one when I began writing, I'll just ask readers to tune their b/s detectors and go about things in a rational way. The initial panic burst is getting a little over done.
Don't get played over bullish on the rallies or over bearish on the corrections. It should be a long ride because the bottom is coming from epic negative sentiment and the initial statement, made so well by silver, was a strong and impulsive one. This implies change. Stock market bulls might also consider the implications of change.