END_OF_DOCUMENT_TOKEN_TO_BE_REPLACED

US$ Breakout Could Unleash Capitulation in Precious Metals

PRECIOUS METALS look very oversold and due for a bounce or a pause, writes Jordan Roy-Byrne at TheDailyGold.

But we have also argued that the overall prognosis remained very bearish. The technicals argue for more downside and sentiment indicators remain far from bearish extremes.

The strength in the US Dollar Index is another reason precious metals should remain under pressure. If the US Dollar's trade-weighted index against other currencies makes a strong break above 100 it could trigger a final wave of liquidation in gold and silver.

The US Dollar has spent much of this year consolidating and digesting its huge advance from summer 2014 into 2015. After surging nearly 25% within eight months, the greenback has managed to hold above previous resistance (2004-2005 highs and 2008-2010 highs) and the 38% retracement of the advance (at 92). Today it is trading less than 1.2% from a new high. These are signs of strength and typically precede a breakout to the upside rather than a move lower. 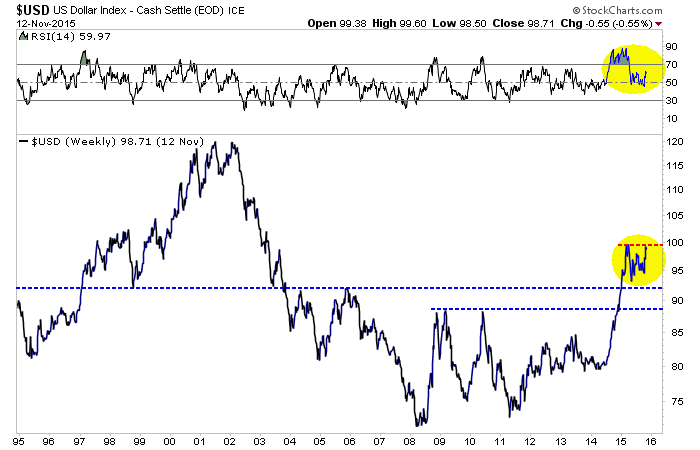 As one would expect, the very bullish outlook for the US Dollar stands in contrast to the outlook for precious metals.

Below we plot the weekly candle charts of gold and silver. The swift decline over the past few weeks confirms that the recent rebound was essentially a retest of the summer breakdown to new lows. 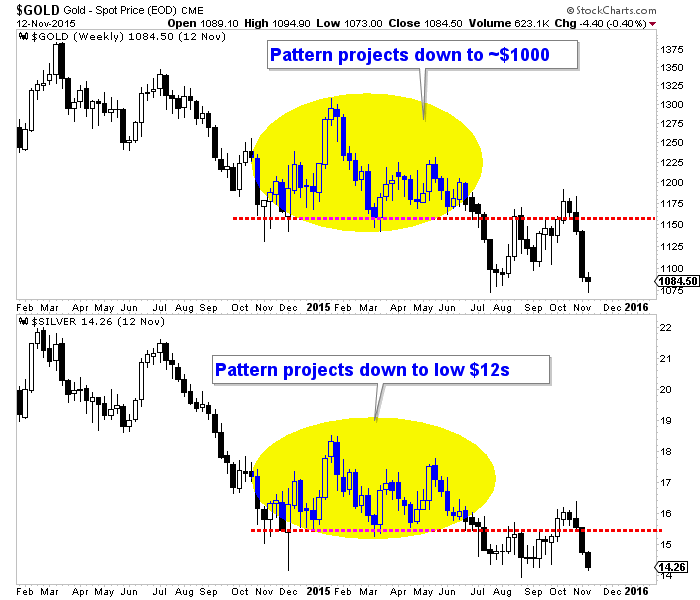 When a market breaks a key level it will often retest that break in a counter-trend move. The break is confirmed when the market reasserts itself in the direction of the break. That is precisely what has occurred in gold and silver over the past few weeks.

We should also note that the eight month consolidations point to much lower targets than current levels.

A big breakout in the US$ index above 100 would likely coincide with precious metals moving to new lows. Last week we published gold's monthly chart which has strong support targets at $970 per ounce and $890 per ounce. Gold is trading at $1082 per ounce as we pen this.

Many gold bulls think that the bear has already gone far enough and that further losses are highly unlikely. While that could make sense in theory, the reality is further losses are definitely possible in the weeks ahead. As gold bulls we do not want to be buyers until we see a sector that becomes extremely oversold and is trading near strong support levels amid extreme bearish sentiment.